The symbolism found on this trump card is primarily drawn from mythology, Christianity, alchemy, astrology.

The Rider Waite World card borrows heavily from the Marseille Tarot. Waite himself says, “this final message of the Major Trumps is unchanged – and indeed unchangeable – in respect of its design”.

In both instances the naked World dancer moves encased within a victory wreath. The four corners of the card contain tetramorphs, mystical creatures of antiquity and mythology depicting a bull, lion, bird and human face.

The dancer holds dual magical wands, as opposed to The Magician who only holds one.

What Does The Dancer Symbolize in The World Tarot Card?

The dancer symbolizes the fetus waiting to be born again, as the Fool prepares to start over through the procession of the Major Arcana. However, this is no babe starting from scratch, we are presented with a woman at her height of beauty and youth. She signifies the next stage of evolution.

Some occultists claim that the figure is a hermaphrodite, because her sexual gender is hidden by the scarf. They say she is the union of male and female, and that sexual identity is no longer relevant or defining. The dancer perfectly integrates aspects of the male and female. Wouldn’t this card be a suitable iconographic image for gender fluidity in todays times! The dancer is both the bride and bridegroom.

The purple sash is the color of divinity and wisdom. It evokes the images of a Catholic priest who puts on a purple stole when offering the sacrament during mass. The sash curves in the figure of eight, suggestive of the cosmic lemniscate or infinity sign.

The dancer wears a red hairband, which draws fire energy to her head area. It symbolizes that her mind and conscious is active. This is not someone who exists only in the spiritual realm.

The dancer crosses her legs in a similar manner to the Hanged Man. However, the triangle he represents is under the cross of the tree, symbolizing he is still bound by earthly things. The dancer is reversed, she forms a triangle pointing upwards, from the tip of her head to her two outstretched hands. Thus the triangle of Spirit now overturns the cross of the material earthly plane.

The triangle forms the alchemical symbol of Sulphur, implying that human consciousness has arrived at its highest level of awareness.

What is The Meaning of The Laurel Wreath in The World Card?

The woman is surrounded by a large laurel wreath, traditionally a symbol of success and victory. The implication here, on the Fools Journey, is that there is cause for celebration. This is the end of the road before a new era begins. The wreath forms the shape of a zero, which is the number of The Fool card.

The wreath also symbolizes the womb, signaling that the woman is like an embryo waiting to be reborn.

The oval shape of the wreath is also used by the Golden Dawn in their Tattva cards. These colorful cards were designed to aid the development of clairvoyance through visual meditation, and one of the symbols in the cards is an oval. The oval corresponds to the Akasha, ether or spiritual realm (see Akashic Records).

The red ribbon bindings at the top and bottom of the wreath indicate completion, the circle has been made complete.

It also reminds one of the ancient quote, “as above, so below”.

Who Are The Four Figures in The World Card and What do They Symbolize?

The four beasts represent the four living figures or hayyot, which are a class of heavenly beings in Jewish mythology. According to both Jewish and Christian tradition, the creatures vary by description. In this card we see the four tetramorph, a lion, man, eagle and bull.

These creatures represent the four seasons, as well as the four elements of Fire, Air, Water and Earth. Their presence implies that they are the cornerstones of a balanced life.

The blond-haired man represents the astrological sign of Aquarius, winter season and the element Air.

What is The Meaning of The Blue Background?

The blue background is the cosmic mind or ‘Universe’ as it has come to be known in the New Age. The dancer is able to manipulate this realm easily with her two wands.

The Ultimate Guide to The World Symbols 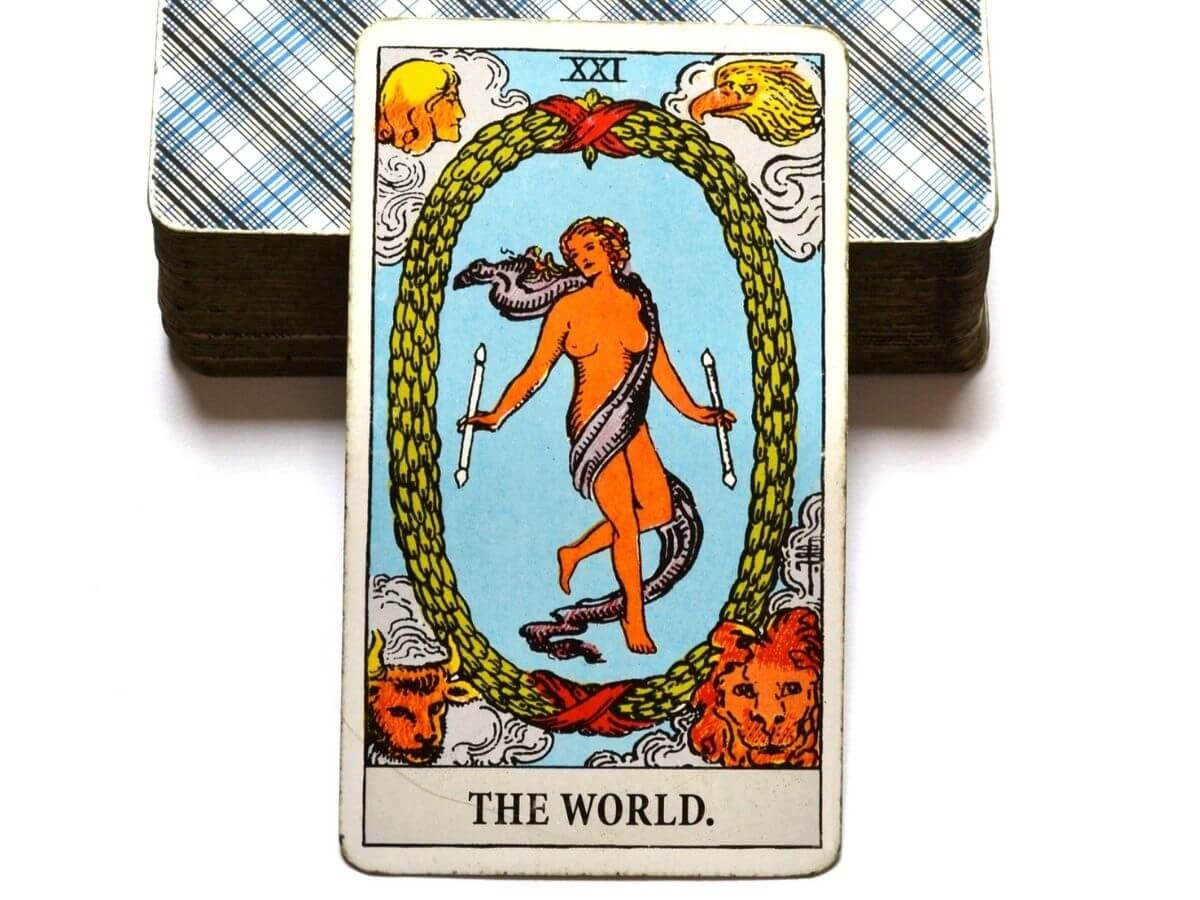