The symbolism found on this trump card is primarily drawn from mythology, alchemy, astrology, the Old Testament, and western occultism.

Compare The Wheel of Fortune Symbols in Historical Decks

The Wheel of Fortune or Rota Fortunae as it is also known, has been a common metaphor and allegorical symbol for the nature of Fate in Europe, since ancient times. The Wheel belongs to the goddess Fortuna, who when she spins it, leads to the fortune of some, and the misfortune of others.

For example, in the 15th century painting above, the Wheel of Fortune is turned by the Queen of Fortune. Four figures on the left are shown helping her to turn the Wheel. More people try to grab on to the Wheel as it rises, and others drop off to the right as it falls.

In his version of the Wheel of Fortune, Waite adheres largely to the original translations of the Wheel as a symbol of humanity’s fate. He also retains much of the iconography of older Tarot decks, such as the Visconti-Sforza and Marseille Tarot.

What is The Meaning of The Letters on The Wheel of Fortune?

Arthur Waite writes that the “transliteration of TARO or ROTA is inscribed on the wheel, counterchanged with the letters of the Divine Name – to shew that Providence is implied through all.”

As the Wheel turns, the letters read ROTA TARO ORAT TORA ATOR. These are Latin words which translates roughly as “The Wheel of Tarot speaks the Law of Nature.”

The letters ROTA represent the tetragrammaton, the four-letter name for God in Hebrew.

As one side of the Wheel moves down, the other side must move up. The Wheel is an allegory of life’s ups and downs. The wheel turns around the center, and at the center is God.

The letters can also be read as TARO, a reference to Tarot cards and their significance for the purpose of divination and fortune telling. Waite admits he followed “the reconstruction of Éliphas Lévi” in his design for this card. Lévi was a famous esotericist and author of more than twenty books on occultism, magic, alchemy and Kabbalah. He was one of the first occultists to place Tarot at the center of occult science.

What Are The Four Symbols inside The Wheel of Fortune?

The wheel has eight spokes, like the eight-pointed star which represents the universal radiant energy.

The four spokes that cross at the center of the Wheel, form the letter X. This X sign is symbolic of marking the spot of a physical kingdom (Earth). We see a similar reference in the Six of Cups. X also refers to the roman numeral for ten, which is the card number.

On four of the spokes are the alchemical symbols for mercury, Sulphur, water and salt. These ingredients are considered essential for great alchemical works.

Who Are The Three Figures on The Wheel?

On the bottom right of the Wheel is a human figure with the head of a jackal or wolf. His figure is rising on the Wheel. He represents the Egyptian god Anubis who was concerned with truth. When a King was being judged in the after-life, Anubis placed their heart on one side of a scale and a feather to represent Maat (Goddess of Truth) on the other. We are thus reminded, that when truth is on the rise, good things happen. When truth is on the decline, evil descends.

The golden serpent descending the Wheel represents Typhon, the Egyptian god of evil. The serpent is on the decline in this card, which means when the Wheel of Fortune turns up in a Tarot reading, better days are coming.

A blue sphinx rests on top of the Wheel. She is a symbol of wisdom and equilibrium, which is why she holds the sword of justice. The sphinx has seen everything that has ever been, and can judge when it is time to turn the Wheel again. As such, she replaces the Queen of Fortune in traditional depictions. The sphinx is a reference to Egyptology, which Europe (along with Waite and other key members of the Hermetic Order of the Golden Dawn) was obsessed with in the 19th century.

Who Are The Four Figures at the Corners of The Wheel of Fortune Card?

At the corners of the card, seated on clouds, are the four mystical animals mentioned in prophecies attributed to the prophet Ezekiel (Ezekiel 1:10, Old Testament). These four figures evolved into the tetramorph of the Four Evangelists.

All of the creatures are reading from a white book. This book may be the Akashic Records, said to hold a collection of mystical knowledge from all ages. It contains information on all the past lives you have ever lived. The book is white, which is symbolic of Spirit and the ether. The creatures are colored in yellow, which is symbolic of the mind. The four figures are thus receiving knowledge and instruction from the Spirit plane.

The Ultimate Guide to Wheel of Fortune Symbols 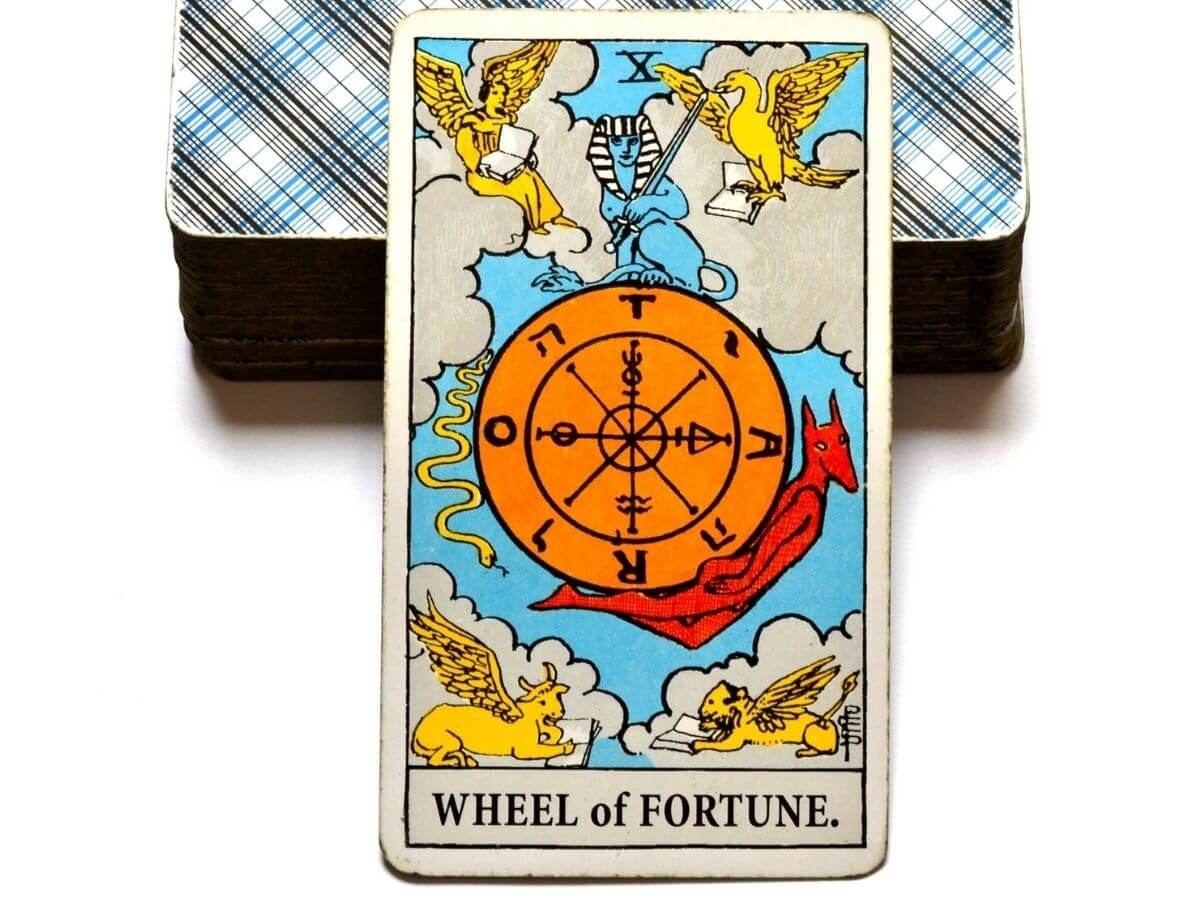