The symbolism found on this card is primarily drawn from mythology, astrology, mysticism, metaphysics, philosophy and western occultism.

What Does The Infinity Symbol Mean in The Two of Pentacles?

A young man in theatrical clothes, juggles two pentacles engraved with pentagrams. Arthur Waite writes, the pentacles travel the path of an “endless cord which is like the number 8 reversed.” For some reason, the author neglects to mention the most important esoteric fact: the sideways 8 is a lemniscate or infinity symbol. [Lemniscate comes from the the Latin lemniscus which means ribbon.]

The philosophical nature of infinity has been a subject of debate since ancient Greece. The artist Pamela Colman Smith was most likely using the symbol in this card to suggest that things have a way of working themselves out. Infinity is called natural law in the West, and the Dao or The Way in the East. The general theme is that we humans, have an exaggerated sense of self-importance, and that Nature has it’s own rhythm when it comes to time and change and gain and loss.

An infinity symbol also appears in the Magician Tarot card, connecting the two cards. The Magician is represented as the Juggler in historic decks. He is associated with the expression ‘as above, so below’, a phrase which finds its roots in Hermeticism. This phrase means that celestial events, including astrology, moon phases and change of seasons have an influence on what happens to us on Earth.

Why Does The Juggler Raise His Left Foot?

The juggler raises a foot, his head tilted to the left. Is he simply dancing or is there a greater significance to this posture?

The artist could be referencing the cosmic dance of Shiva, in this card. The dance is called Anandatandava and symbolizes the cosmic cycles of creation and destruction. In other words, the daily rhythm of birth, death and reincarnation. Statues of a dancing Lord Shiva, present the God with his head tilted towards a raised left foot.

The cosmic dance, is another reference to the exaggerated importance we give to decisions, which in the greater scheme of things, are not usually as important as we believe.

W.B. Yeats advised Smith on symbology when creating the artwork for the Rider Waite deck. Yeats was a famous mytholgical poet and also high ranking member of the Golden Dawn. We know he was introduced to esoteric Indian themes and theology as early as 1884, when his mother presented him with a copy of A. P. Sinnett’s Esoteric Buddhism. His first book of poems, Crossways, includes at least three poems with Indian themes. [ Source: To Never See Death: Yeats, Reincarnation, and Resolving the Antinomies of the Body-Soul Dilemma ]

What is The Symbolism of the Sea and Ships in The Two of Pentacles?

The temperament of the sea in Tarot is used to reflect the readers state of mind. A calm sea reflects a calm mind. In the 2 of Pentacles, the waves oscillate in a sine wave pattern, performing a harmonic motion in a liquid dance.

This movement suggests that the reader is going back and forth on a decision, and yet, one feels fate has already determined the outcome. The reader must simply go with the flow.

Two tall ships ride waves behind the juggler. In Tarot, ships represent a situation or events ‘moving on’ for the querent.

At a higher level, boats transport us, and allow us to make a journey across life. Therefore a boat or ship can also represent a journey of education, faith, business or personal development.

What is The Meaning of The Tall Hat Which The Juggler is Wearing?

Why is the juggler wearing a tall hat in the 2 of Pentacles?

The artist Colman-Smith had a background in theatrical design, which is apparent in this card.

The tall conical hat is called a ‘sugar loaf’ hat and was commonly worn in England in the 15th century; and at Carnival time in folk ceremonies in Europe.

The comical nature of the hat, evokes the mood of a Shakespeare play, and the comments his characters make on the fleeting nature of life.

What Sphere Does The Two of Pentacles Represent in Qabalah?

According to Kabbalah, God (Ein Sof) made manifestations. Each manifestation is called a Sephirah (plural, Sephirot). Twos in Tarot connect to the second Sephirah, called Chokhmah, meaning wisdom.

According to the Hermetic Order of the Golden Dawn, Jehovah is the God associated with Chokmah and Raziel is the archangel who resides over the sphere. The order of angels that reside in the sphere are the Ophanim (the wheels).

The Ultimate Guide to Two of Pentacles Symbols 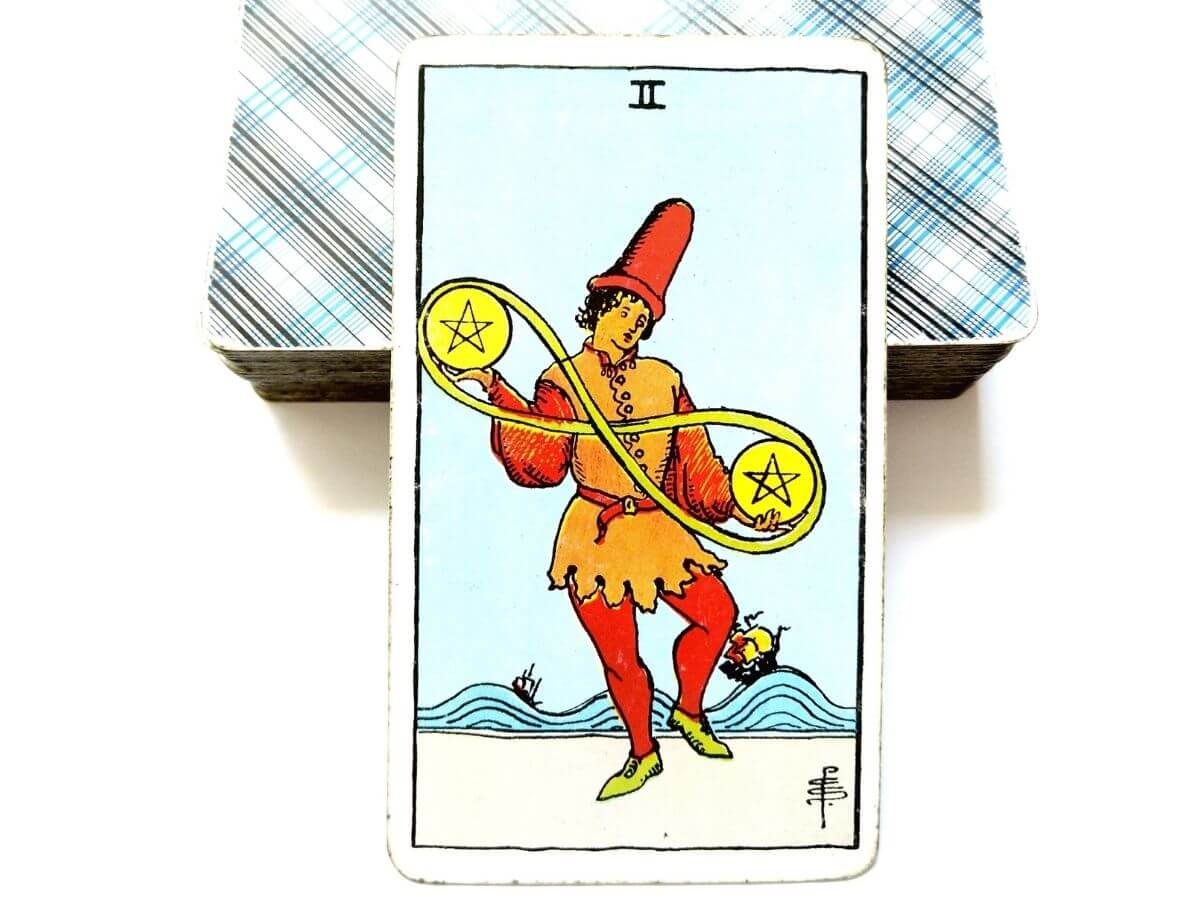