What Does The Chalice Symbolize in The Two of Cups?

The chalice or goblet symbolizes the human heart. In this Tarot card, there are two chalices, representing two hearts. Much like the Lovers Tarot card, here we see two energies bonding together. The couple are holding up their chalices in a toast, signalling that they are prepared to trust the other with their heart and future. There is a sanctity to these vows, and thus the chalice becomes a symbol of their mutual respect and promise.

What is The Meaning of The Man and Woman?

A man and woman stare into each other’s eyes, their gaze fixed over two chalices. The duality symbolism is clear; male and female, Yin and Yang, opposites attract.

The concept of duality such as man and woman, dark and light, fire and water, negative and positive is popular in Chinese philosophy. It lies at the origins of many branches of classical Chinese spiritual movements including taijiquan (t’ai chi) qigong (Chi Kung) and I Ching.

While two people or two forces can appear to be opposite on the surface, they may actually be complementary in the natural or real world. Men and women are very different by nature, but mutual happiness can be achieved sometimes when both sides are prepared to meet in the middle.

Thus, the two figures in this card could be finding common ground as lovers or friends, or as two races, religions or people with differing opinions.

What Does the Caduceus of Hermes Mean?

The couple are seen toasting their future beneath the Caduceus of Hermes. The caduceus is a symbol of the Greek God Hermes, or Mercury as he was known in Roman mythology. The caduceus is a short staff entwined by two snakes and capped by wings. Any oath taken below this staff is considered sacred.

Snakes were highly symbolic of transformation and healing in the ancient world because they can shed their skins and morph into a new state. The appearance of the snake in this card suggests that whatever relationship is on the Tarot reader’s mind, is a healthy one.

Wings are associated with flight and freedom. This can mean you don’t become the ‘couple’ who blend into one identify, but rather you retain your individual identities.

In the Ancient world, the staff, or caduceus was considered a magic wand. When applied to the dying, it made their death gentle and if applied to the dead, it could bring them back to life. In modern times, the caduceus is sometimes used as a logo by healthcare organizations and pharmacies, although the Rod of Aesculapius which only has one snake and never depicted with wings, is more common. If you are a healer, and are making a commitment to you spiritual development, the Two of Cups can mean that your ‘vow’ or oath has been heard and recognized by Higher Powers.

The caduceus is also a recognized symbol for healthy business negotiations. It means you can trust the other party in your dealings.

Note: In this card, the artist Pamela Colman Smith has added a lions head to the caduceus, which is unusual. It is not clear why she did this. It may simply have been for decorative reasons. If the lion is meant to symbolize something, possibly it is courage.

⭐The caduceus only appears in the 2 of Cups, in the Rider-Waite Tarot deck

What Do The Hills in the Two of Cups Mean?

That said, do not ignore these obstacles, keep your eyes open.

What Does The House in the Background Signify?

In Tarot, houses represent home and family life. Here we could be looking at the very same house which appears later in the Ten of Cups; perhaps just from another vantage point. The 10 of Cups traditionally means ‘happy ever after’, and so perhaps we are being treated to a preview of this couple’s future?

The house in this card suggests you are on the path to success and happiness.

Qabalah and Numerology in The Two of Cups

In numerology, the number 2 represents partnership, polarity, choice, duality and balance. In Qabalah (Kabbalah), the Two of Cups depicts Chokmah in the world of Briah; the second sphere of wisdom or intelligence applied to the world that always flows and changes. Staying the course.

The Ultimate Guide to Two of Cups Symbols 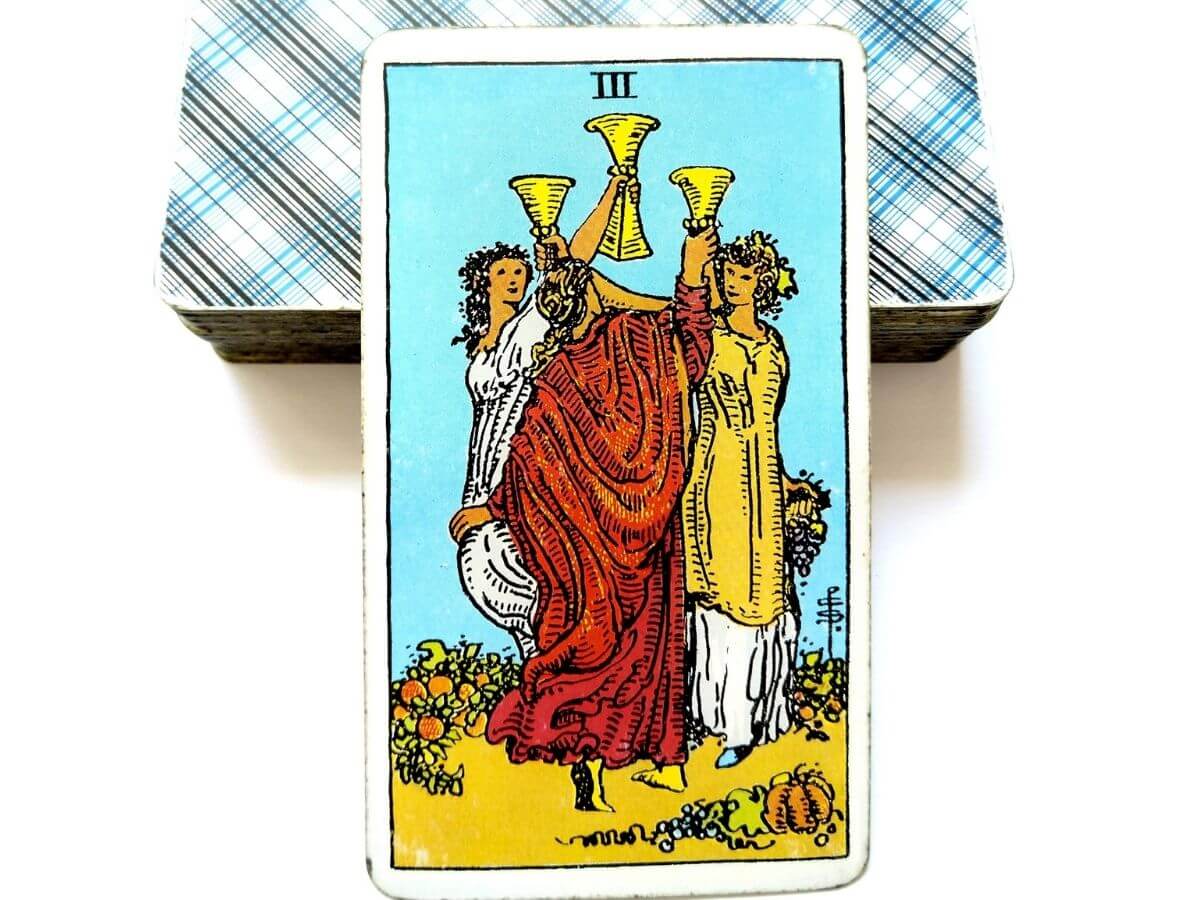