The symbolism found on this card is primarily derived from mythology, alchemy, metaphysics, ontology and the occult.

“A calm, stately personage, with his back turned, looking from a cliff’s edge at ships passing over the sea. Three staves are planted in the ground, and he leans slightly on one of them.”

Imagery of the 3 of Wands: Symbol meanings, metaphors, allegories and legend.

What Do The Wands Symbolize in The Three of Wands?

A merchant stands on a cliff edge overlooking a harbor. Two wands are planted firmly in the ground behind him, representing what has already been achieved and secured. He holds another wand in his right hand, indicating further opportunities sailing towards him. This can be viewed as progress on the previous card the Two of Wands, where our merchant only had one wand secured to the castle wall.

Note that each wand has three branches. The number three has long been celebrated as a spiritual number and represents what is real and solid. Nothing is quite complete unless it comes in threes, we know the job is not yet finished. As the expression goes: all good things come in threes. In Christianity, three represents the Divinity and Holy Trinity. God’s attributes are omniscience, omnipresence and omnipotence.

The power of three symbolism has been around since ancient times and can be seen in the Celtic triquetra, and Greek philosophers who declared it the perfect number of balance. Pythagoras even believed that the number 3 stood for good luck and fortune.

What is The Meaning of The Cliff Edge and Mountains?

Mountains and cliffs tend to represent ‘obstacles’ to overcome in Tarot. The closer the mountain or cliff, the more immediate the problem.

However, in this card, our merchant stands triumphantly on top of the cliff, and has dug his wands firmly into the ground, much like a mountaineer might do when he reaches a mountain summit and plants a victory flag. This indicates that he has overcome obstacles to reach this point in time, and is now waiting for his efforts to pay off.

The sheerness of the cliff edge suggests that his next venture may be more ambitious and riskier. It requires, a leap of faith or courage. The distant mountains signify that ventures further afield will have their challenges, but are not a problem to worry about today.

As the number three is associated with spirituality and mysticism, one feels that this merchant may be tapping into his intuition and subconscious for direction, rather than relying purely on rational thought. The headband he wears is similar to that worn by the Magician, and thus can be seen as a reference to the magical and paranormal, in particular extrasensory perception (PSI) and premonitions.

What Does The Sea Represent and Why is it Yellow?

The ocean is vast, majestic and awe inspiring. When an ocean or sea appears in Tarot, it signifies the querent is reflecting on life and asking the Big Questions, like, where to from here?

The ocean here is more expansive than in the Two of Wands, significant of grander horizons and greater possibilities. The more we succeed, the more our vision expands.

The sea can be calm, turbulent or even quite violent, but in this card the waters are calm reflecting the gentle movement of patience. We are reminded again that we must wait for the ships to arrive in due course. While sailing ships may travel faster in stormy winds, they can also sink! It is worth being patient.

The yellow color of the sea reflects the setting sun, although it could equally be a dawning sun. We are either experiencing the end of a very satisfactory day and looking forward to a new day, or we are witnessing the dawn of a new day. I think you need to interpret this card individually in any given reading.

The golden yellow color of the sea appears to be imperial yellow, which has been worn by Chinese royalty for thousands of years. There is a Chinese expression which says, Yellow generates Yin and Yang,” meaning that it is at the center of creation.

This is no ordinary sea, we are being told here by the color that the path ahead is alchemist ‘gold’ and shrouded in success and glory. Interestingly, in Chinese Buddhism, yellow is associated with freedom from earthly needs like money and possessions, which is why monks wear yellow robes. Perhaps this is a subtle reference to the future, that once we have arrived at success, the next question will be, what now? The merchant on this mountain top may become the Hermit in time, asking existential questions and turning his mind to philosophy and even spiritual teaching.

What do The Ships Symbolize in the Three of Wands?

Boats and ships in Tarot represent a situation or events ‘moving on’ for the querent.

At a higher level, boats transport us, and allow us to make a journey across life. Therefore a boat or ship can also represent a journey of education, faith, business or personal development.

There are three sailing boats in this card, again reflecting the symbolism of the number 3. These boats have large sails and are powered by wind. Our merchant must wait patiently for the wind to blow, in order to receive his cargo, or for his cargo to reach his customers. It is not clear if the ships are incoming or outgoing, this should be interpreted individually in a given reading.

The author A.E. Waite of the Hermetic Order of the Golden Dawn, may have chosen ships powered by wind for a reason, in this card. Wind is transient and elusive, and has long been considered a messenger of the gods. When the winds blow in your favor, the gods are with you. Some consider wind the primary element of the four elements earth, air, water and fire because of it is the creative breath of exhalation. In Symbols of Transformation, Carl Jung points out that the Arabic word for spirit – ruh – signifies both ‘breath’ and ‘spirit.’

What Sphere Does The Three of Wands Represent in Qabalah?

Qabalah (Kabbalah): In western occultism, the 3 of Wands depicts the third sphere or sefirot of the Tree of Life called Binah. This sphere represents growing understanding of the world as a result of experience.

According to the Hermetic Order of the Golden Dawn, Tzaphqiel, is the Archangel in this realm, he is also known as the Prince of the Spiritual Strife against Evil. Archangel Jophiel is also referred to in Binah. The order of angels that reside in this sphere is Aralim, also called the Order of Thrones and the Strong and Mighty Ones.

The Ultimate Guide to Two of Wands Symbols 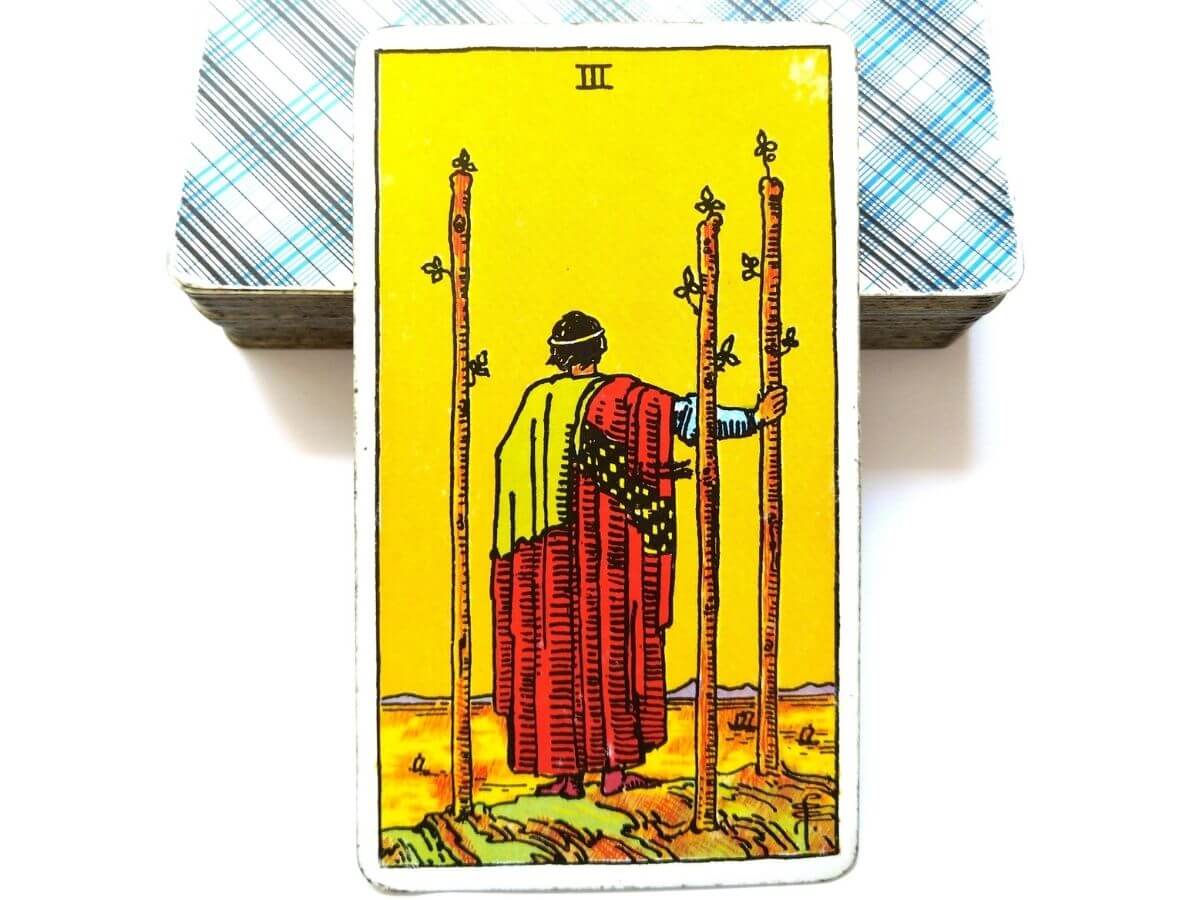