The symbolism found on this card is primarily drawn from western occultism, Kabbalah, numerology and Greco-Egyptian attributions.

“Three swords piercing a heart; cloud and rain behind.”

What Does The Heart Symbolize in The Three of Swords?

The Rider Waite card shows a valentine-style heart, pierced by three downward thrusting swords. The artist Pamela Colman Smith took the imagery directly from the 15th century Sola Busca Tarot, making this by far the oldest of the pictorial pips.

A blood-filled red heart floats in the air. The sky is filled with a raging storm, clouds and rain. Three swords pierce the heart with exact precision. The heart has been pierced and cut to shreds. And yet it does not bleed, suggesting that the wound is not fatal. This card represents sudden pain, disappointment and/or loneliness.

The stabbing suggests that the pain has been inflicted by others or an outside situation, rather than self-inflicted. While the suffering may be deep, the pain is a temporary condition. The storm will pass and then we move on to the calmer days of the 4 of Swords.

“Alone and in the midst of men,
Alone ‘mid hills and valleys fair;
Alone upon a ship at sea;
alone – alone, and everywhere.
O many folk I see and know,
So kind they are I scarce can tell,
But now alone on land and sea,
In spite of all I’m left to dwell.
In cities large – in country lane,
around the world – ’tis all the same;
across the sea from shore to shore.
Alone – alone for evermore.”
Poem by Pamela Colman-Smith
“Alone,” The Green Sheaf vol. 4, 1903

An exposed heart pierced by a sword is also a common Catholic image. The artist Colman Smith was a devout convert to the Catholic Church, and she may have been referencing Jesus here, more specially the Sacred Heart of Jesus. The heart in this instance refers to “God’s boundless and passionate love for mankind”.

It may also be a reference to Mother Mary, more specifically The Immaculate Heart of Mary. Luke 2:35 recounts the prophecy of Simeon that Mary’s heart would be pierced with a sword, the pain to come when her son was put to death. This is why the Virgin Mary is often depicted in paintings and statues with an exposed heart. The heart is meant to prompt the devoted to prayer or contemplation.

Why Are There No People in The Three of Swords?

The Three of Swords is one of the few cards in the Rider Waite deck without people. The reason for this perhaps, is that the artist intended to keep the message as open as possible to individual interpretation. As soon as you place a person in a picture, it is human nature to start identifying with that figure, and so the story becomes ‘tainted’. By keeping the picture human-free, it allows the reader to expand their psychic intuition in a reading and gleam more unexpected information.

When a Tarot card has no people in it, it means that this is your story to interpret.

⭐The other people-free cards are: 8 of Wands Symbols

What is The Meaning of The Storm and Rain?

Dark clouds or skies in Tarot indicate that the sitter is going through a rough time. The clouds here crackle with thunder. Thunder is caused by the sudden expansion of air in the path of a lightning bolt. We are reminded here that the swords suit represent the element Air. We are also reminded that once the bolt of pain has passed, the healing can begin.

In this card the rain falls heavy, predicting a cause for a sudden downpour of tears. Rain is traditionally a sign of cleansing in a Tarot reading.

What Sphere Does The Three of Swords Represent in Qabalah?

According to Kabbalah, God (Ein Sof) made manifestations. Each manifestation is called a Sephirah (plural, Sephirot). Threes in Tarot connect to the third Sephirah, called Binah.

According to the Hermetic Order of the Golden Dawn, Jehovah Elohim is the God associated with Binah. Tzaphqiel, is the Archangel of this realm, also known as the Prince of the Spiritual Strife against Evil. Archangel Jophiel is also referred to in Binah. The order of angels that reside in this sphere is Aralim, also called the Order of Thrones and the Strong and Mighty Ones.

The Ultimate Guide to Three of Swords Symbols 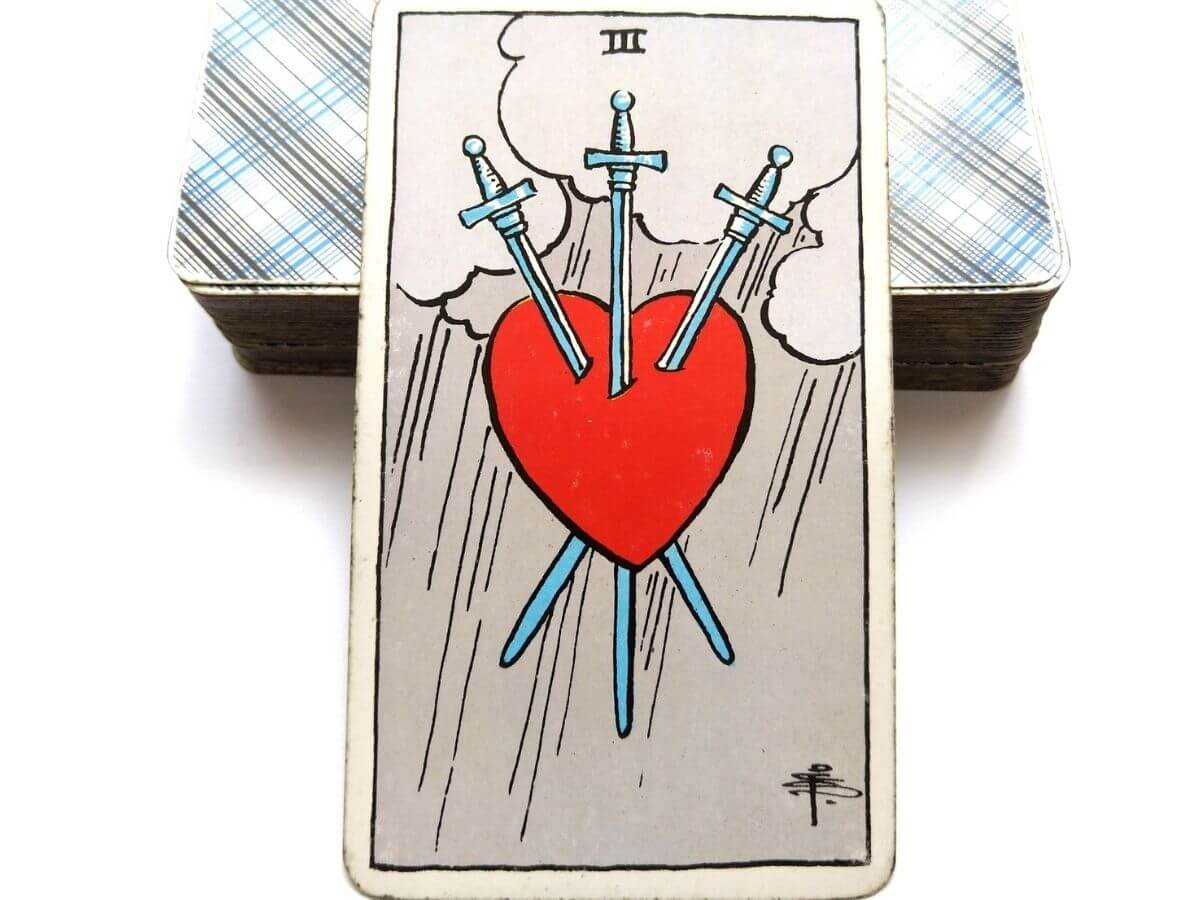