The symbolism found on this trump card is primarily drawn from the Bible, Kabbalah, mythology, astrology and occultism.

The Rider Waite version of The Tower is based on the La Maison Dieu card from the Marseille Tarot deck.

In both versions, two figures are thrown from a tower. An energy force strikes the tower from the right side of the card, knocking the crown off the top of the tower. Three windows are set into the tower.

Interestingly, the 15th century Visconti-Sforza Tarot, does not include The Tower.

In the 16th century Minchiate Tarot deck, the image shows two scantily clad people fleeing a burning building. In the 17th-century Belgium Tarot of Jacques Viéville, this card is called La Foudre (The Lightning) and depicts a tree being struck by lightning.

Who Are The Falling Figures in The Tower Card?

What do the falling figures in the Tower card symbolize?

The man and woman correspond to the chained couple in the Devil card. Waite writes of the comparison, “One is concerned with the fall into the material and animal state, while the other signifies destruction on the intellectual side.”

The couple in the Devil card found pleasure in chasing wealth and earthly pleasures, and in the Tower card, their worldly success, demonstrated by the towering home and golden crowns, has led to conceited pride – a feeling ‘we’re better than you’.

They fall headfirst, because the sudden influx of spiritual consciousness, represented by the flash of lightning upsets all their notions about themselves and their lives. The higher someone climbs, the further they can fall.

The figures were previously nude, but are now clad in expensive clothes. The clothes are symbolic of covering up, hiding their humble origins as the animal-humans in the Devil.

As the lightning hits, all will be revealed and we will see them in their natural state once more. Any fakeness is removed.

They will have an opportunity to make the most of this rude awakening, and regain some of the higher spiritual connections, they once held as the Lovers.

In reality of course, most people soon forget the lessons they learn when the Tower crumbles. They go about rebuilding the same old towers, and crawl in again.

The falling man wears a blue robe with a red cape. The blue represents the subconscious, just as the High Priestess wears a blue dress. The red cape represents conscious actions. The division of color here is about 50:50, meaning that that in his heart, he knew this moment was coming. He just chose to ignore the warning signs.

The woman wears the crown, indicating that the man has willingly abdicated responsibility to her. She is dressed in blue, with only a touch of red in her shoes. The woman is not in balance, and has longed been ruled by emotions. She is the type of person who would justify a bad decision by saying, “I can’t help it, that’s how I feel.”

What is The Symbolism of The Tower in This Card?

The Tower is symbolic of the Tower of Babel, from the 11th chapter of the Book of Genesis.

According to Genesis, in order to make a name for themselves, the Babylonians wanted to build a tower “with its tops in the heavens”. The tower is symbolic of the illusions of a false ego, and showing off. Needless to say, God destroyed the tower and scattered the workers.

It reminds me of this quote from the bible:
For the LORD your God is a consuming fire, a jealous God. (Deuteronomy 4:24)

The Tower is set upon an inaccessible mountain top, seemingly made of shards of glass. There is no way to climb up to it, and no door in sight, even if you managed to scale the peak. The people in this Tower have set themselves apart from everyone, which symbolizes the fallacy of mankind. As soon as someone does well in the world, they want to appear successful and special, yet they forget that if people cannot get at them, they can’t get at others. It is a lonely place, with few real friendships or relationships.

Higher Powers see that the only way to help this couple rebuild a more meaningful life is to hurl them out head first, hoping it will knock some sense into them.

As I mentioned previously, of course, many will just choose to rebuild another tower.

Note: The Tower is associated with Mars, the god of War.

Three windows are set into the top of the Tower. The symbolism of three reoccurs throughout the Rider Waite deck. It is a highly symbolic number, representing among many things, the Holy Trinity * mind, body, spirit * past, present, future * nature, reason and wisdom.

The same black background is portrayed in The Devil and The Tower cards. This darkness symbolizes two aspects:
(1) Ignorance.
(2) Occult forces and being able to make use of the dark as a hidden force.

The Devil holds an inverted torch which offered very little light, or illumination. Now, in The Tower, the only source of illumination is the flash of lightning. The light is blinding and only lasts a few seconds. It represents the classic ‘aha, now I see‘ moment.

The lightning leaves behind it the falling rain of 22 Yods.

What Is The Meaning of The Lightning Strike?

The thunderbolt of lightning is a symbol of the Divine Fire, mentioned in the Bible, which only destroys what is evil, and purifies what is good.

It is a sudden glimpse of truth, or a flash of inspiration which breaks down ignorance and reveals the truth.

In Kabbalah, the lightning-flash is a symbol of life force energy which animates the Tree of Life and the ten Sephiroth.

The drops of water falling from the sky are found in many other cards in the Rider Waite deck. They appear to be in the shape of the Hebrew letter yod (pronounced ya). According to the Jewish sages, the yod represents the world to come and completeness.

There are 22 yods to represent the 22 letters of the Hebrew alphabet.

The presence of yods signifies that the hand of God is at work. You are being divinely guided, or events are being directed around you by a Higher Power.

The ten yods on the side of the woman form the Tree of Life and signify creation. The twelve yods near the man represent the twelve signs of the zodiac. Correspondingly, the yods represent all types of personalities. We are to understand that anyone could find themselves in this situation.

What is The Symbolism of The Crown on Top of The Tower?

On the top of the Tower is a crown, which tumbles to the ground with the two people.

The crown represents ‘crowning glory’, it’s an in-your-face symbol of all one has achieved. It is the expensive car or large house you buy to show off to the neighbors. It is a hat worn to separate you from other people, to raise yourself above them.

As such, the falling crown becomes a symbol of loss of status.

The Ultimate Guide to The Tower Symbols 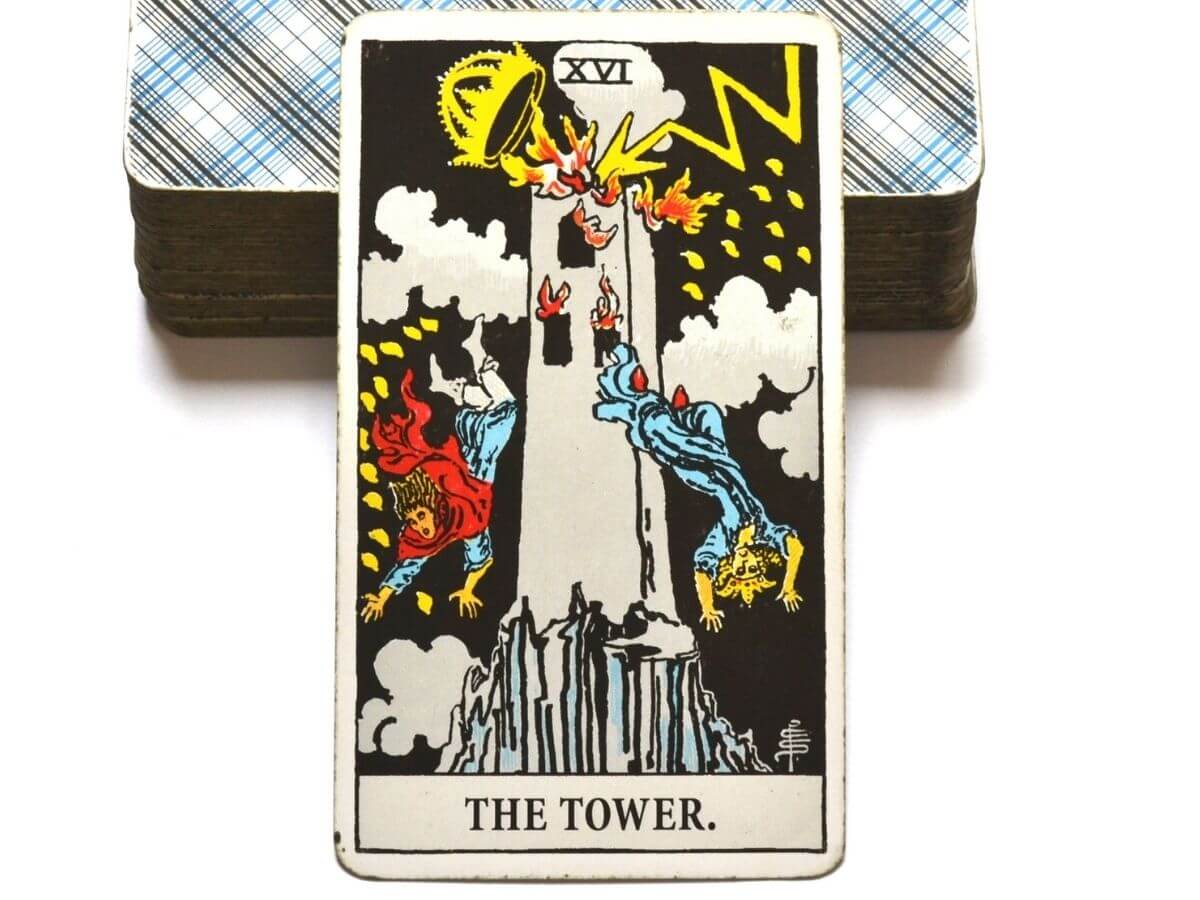