The symbolism found on this trump card is primarily drawn from astrology, metaphysics and Golden Dawn occultism.

Arthur Waite adopts the iconography of the Marseille Tarot Le Soleil card, but with a few changes. Traditionally, sun cards were assigned the astrological sign of Gemini, the twins, and were thus illustrated with two children. The Golden Dawn system reallocated Gemini to The Lovers card, and so there was no need to include two children in the Rider Waite version.

Waite retains the brick wall, and the anthropomorphic sun. A face has been traditionally placed in the sun card since as far back at the 15th century Visconti-Sforza deck.

What Does The Sun and Face Symbolize in This Card?

The Sun represents solar energy. It is a symbol of divinity, God and the great universal source of divine power. The earth would be a dark place without the light of the sun. In the same way, a person’s life is empty and without sparkle when they don’t allow the Divine Light to enter them. Like the Sun in daytime, the Light is everywhere but it is not revealed everywhere. There are those who choose the lower path and ignore their spiritual development.

The Sun thus becomes a symbol of illumination and enlightenment, which according to the Golden Dawn, is best achieved through the study of occult sciences and divination tools, such as tarot, astrology, geomancy, scrying, alchemy and astral travel.

The Sun has a human face, this is to encourage the Tarot reader to picture their face illuminated within the sun. The Sun card is often used as a focus point for meditation, for this specific purpose, to illuminate one’s spiritual gifts. The Hebrew letter assigned to The Sun card, is Resh, which means face.

Notice the face in the sun is smiling like a proud mother. This indicates approval from a higher power, god or angel.

These rays represent the 21 Major arcana cards in Tarot. While the rays are arranged alternatively, the series begins and ends with a straight ray. This reflects the Fool’s journey through the trump cards. When The Fool reaches The World card, he starts all over again, knowing little about the next stage of his evolution. We are all eternal students of life.

At the very top of the sun, is a thin black wavy sun ray. This ray is a sign of the occult. It is not a natural ray, and the meaning is, we have to make an effort, through occult practice, to access the Divine.

What Does The Naked Child Symbolize in The Sun Card?

The child is symbolic of rebirth and transformation. He is a Christ figure and is a metaphor for Christ’s resurrection. His nakedness indicates that he no longer has anything to hide. In a Tarot reading, it means that the sitter feels good on the inside and thus has nothing to hide by revealing themselves. They are in a position to spread good vibes to other people. They have allowed the Light The Child represents perfect control between the conscious and the unconscious. Ego is gone.

A red feather on the child’s head connects the Sun to both Fool and Death. It reflects innocence in The Fool, which is transformed by Death and is reborn again in the Sun child. The feather becomes the awakened cosmic fire of the Holy Spirit. In Waite’s own words, the Sun represents “a child in the sense of simplicity and innocence in the sense of wisdom.” The soul had to lose and then regain innocence in order to mature. This is a new stage of enlightenment and spiritual ascension.

The child has a wreath around his head. It contains little sun symbols, a circle with a dot in the middle. This is the standard astronomical symbol for the sun, and first appeared in Europe during the Renaissance.

As the wreath must extend around his head, we must assume that there are twelve in total, which correspond to the twelve Zodiac signs, and the belt on the Fool.

The 6 circles we can see, are also symbolic of the five senses and the newly awakened sixth sense.

The child clutches a flag or banner in his left hand, indicating that control has now passed from conscious (right hand) to the subconscious (left hand).

The banner is red-orange in color, this is the Kabbalistic sun and the color of the 13th path on the Tree of Life which is associated with The Sun.

Waite draws our attention to “the naked child mounted on a white horse.” This is the quintessential solar horse and steed of the Gods. Both horse and rider are equal in purity, virtue and nobility. They are without blemish, and in perfect intuitive harmony.

What is The Symbolism of The Sunflowers and Brick Wall?

The garden has four sunflowers. These flowers turn towards the child, rather than the sun, indicating that the child is radiating the Light of the Divine.

The number four is symbolical of the four elements – Air, Earth, Fire, and Water. It also represents the four Kabbalistic worlds, and the four kingdoms of nature, mineral, vegetable, animal and human. The sunflowers turn towards the human, and not the Divine, implying that all creation turns to man for its final evolution.

The brick wall is a traditional symbol from older sun cards, and symbolizes boundary lines. The before and after state of being. It represents all you have learnt, up to this point in time. It is the solid foundation on which you can now ride forward.

Waite has depicted a wall with eight layers of bricks. Eight is a reference to the Noble Eightfold Path of Buddhism, the path of eight practices which lead to enlightenment or nirvana. Those practices are: right view, right resolve, right speech, right conduct, right livelihood, right effort, right mindfulness, and right samadhi (meditative state).

On the top layer of the wall, are the letters of the Tetragrammaton, the biblical name for God.

The Ultimate Guide to The Sun Symbols 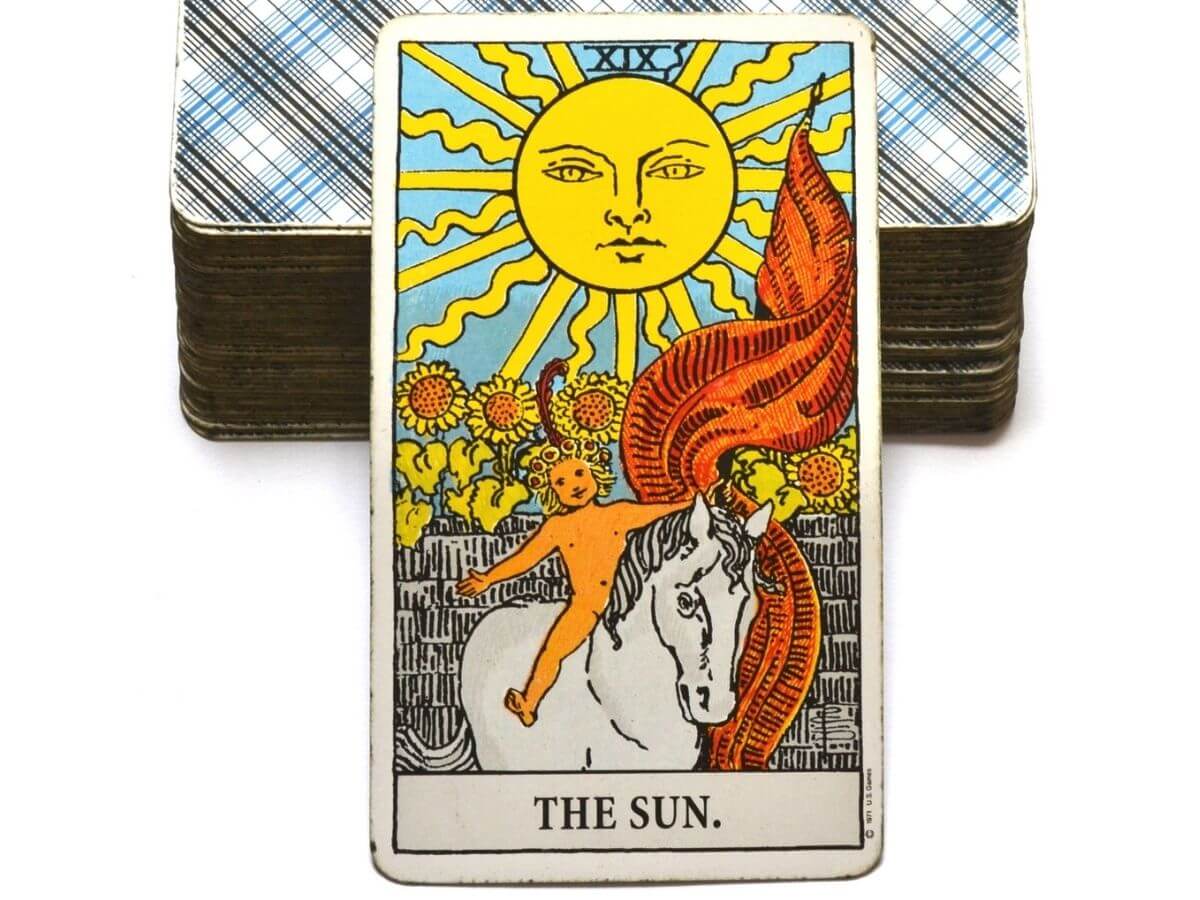