The symbolism found on this trump card is primarily drawn from mythology, astrology, Egyptology and occultism.

The Rider Waite version of The Star is largely based on the Le Toille card from the Marseille Tarot deck.

A naked woman kneels by the water; one foot in water and one foot on land. In each hand she holds a jug and pours liquid into the water and on to the land. Above her is one large star and seven smaller stars surrounding it. A tree is in the background, with a chirping bird with a long beak on top of it.

Who is The Woman in The Star Card and What Does She Symbolize?

Arthur Waite writes, “The female figure in the foreground is entirely naked.” She has no need of protective clothing and symbolizes truth. She has nothing to fear and nothing to hide.

Waite says she expresses “eternal youth and beauty.“ No doubt this is one of the reasons why this card has become associated with the traits of youth, optimism and good health.

The maiden’s foot rests on top of the water, indicating power of mind over matter. One is reminded of the story of Jesus walking on water, a miracle recounted in the New Testament. The miracle was designed to increase the faith of his apostles, and interestingly, one of the central messages of this card is to have hope and faith. Faith healing becomes a central message.

Then Peter got down out of the boat, walked on the water and came toward Jesus. But when he saw the wind, he was afraid and, beginning to sink, cried out, “Lord, save me!”
Immediately Jesus reached out his hand and caught him. “You of little faith,” he said, “why did you doubt?”
Matthew 14:22-33

The maiden is symbolic of the Egyptian Goddess Hathor. This goddess was venerated for her beauty, which again links her to the Empress.

Waite claims, “But she is in reality the Great Mother in the Kabalistic Sephira Binah, which is supernal Understanding, who communicates to the Sephiroth that are below in the measure that they can receive her influx.”

The God of Binah is Elohim. According to Gnostic text, it was said that once upon a time there were three original gods or divinities. The first transcendental being was called Good, the second one was Elohim, and the third was an Earth-Mother or supernal mother called Eden. Eden represents the feminine aspect of God, and it is She, to whom Waite refers in his explanation for this card.

The young woman has yellow hair like the Empress. Perhaps she is the naked Empress, but now she can channel the High Priestess.

What is The Symbolism of The Eight Stars?

Waite writes there is, “A great, radiant star of eight rays, surrounded by seven lesser stars – also of eight rays.”

The iconography of mystical stars stretches back to the 17th century Marseilles Tarot deck and 15th century Visconti-Sforza.

The main star could be the Star of Bethlehem, or Christmas Star, which appears in the nativity story. This is the star that leads you to Jesus and the Word of God.

Waite may also have intended for it to represent the Star of Isis, associated with the Egyptian Goddess Isis. Whenever this particular star appeared in the dry season, it was a sign of rain to come. The rains would replenish the rivers and restore life to dead lands.

The Hermetic Order of the Golden Dawn, originating from a background of Rosicrucianism, Hermeticism and Freemasonry, inherited the belief that Egypt was the repository of ancient wisdom. At the turn of the 20th century when the Golden Dawn was active, Western Europe was gripped with Egypt-fever. The organization capitalized on the latest research from academic Egyptology to design their rituals and cosmology.

Note: The star is yellow to symbolize solar energy, the life force of all living things. The eight-pointed stars repeat the same idea as the 8-spoke Wheel of Fortune, the 8-pointed star on the Charioteer and the 8-spoked wheel on the robe of the Fool.

Waite does not identify the meaning of the lesser stars, and there have been suggestions by other Tarot authors that they could symbolize the seven chakras or psychic centers of the body mentioned by Hindu occultists.

Note: The stars are white to indicate purification, mostly achieved through a chakra cleansing meditation.

What is The Meaning of The Jugs of Water?

Note: The Golden Dawn system assigns Aquarius to this card, and Aquarius glyph is the water bearer.

On the highest part of the land, there is a tree with three branches. The symbolism of threes are reflected throughout the Rider Waite deck. In this instance, it may well refer to the mind, body, spirit connection associated with the New Age, animism, Shamanism and the Holy Trinity.

Perched on the tree is a red bird. Its long beak, which is good for catching fish, evokes an ibis, the sacred bird of Egypt. The Hebrew letter Tzaddi, assigned to this card, means ‘fishhook’.

The Ibis bird was associated with Thoth, the God of wisdom, writing and magic. In a Tarot reading, birds signify a connection between Earth and the spiritual realm. Birds are considered messengers of the spirit world.

A pinkish mountain in the background is the same mountain that you see in the Lovers card. It represents bringing the magic of the spiritual world to Earth.
⭐See: The Lovers Symbols

The pool represents the universal consciousness, or Akashic Records (pool of memories). This is accessed or stirred by meditation and trance.

The stream of water flowing from the jug in the woman’s left hand divides into five rivulets, which flow back into the pool along the ground. These symbolize the five senses – sight, sound, smell, taste, and touch – and how the human body receives information and sends it to the brain.

The fact that the water flows back into the pond of unconscious, suggests that these five senses are limited in usefulness. The psychic senses, or extrasensory perceptions such as clairaudience, clairvoyance, clairsentience and claircognizance, are just as valuable, even in a physical world.

How is The Star Card Connected to Meditation and Mindfulness?

The Star is the calm which follows the storm depicted in the Tower. Notice how the light is dim. We are to understand that this is dusk, illuminated by star light. It is written thus: “When you have found the beginning of the way, the star of your soul will show its light.”

The Star card is associated with meditation and mindfulness. The maiden acts with focus, pouring the water from her jugs.

We are reminded that if we listen, the Truth will unveil itself to us in the silence. True meditation is an active pursuit with a single thought in the mind. Clear the mind, and the guidance will flow.

The Ultimate Guide to The Star Symbols 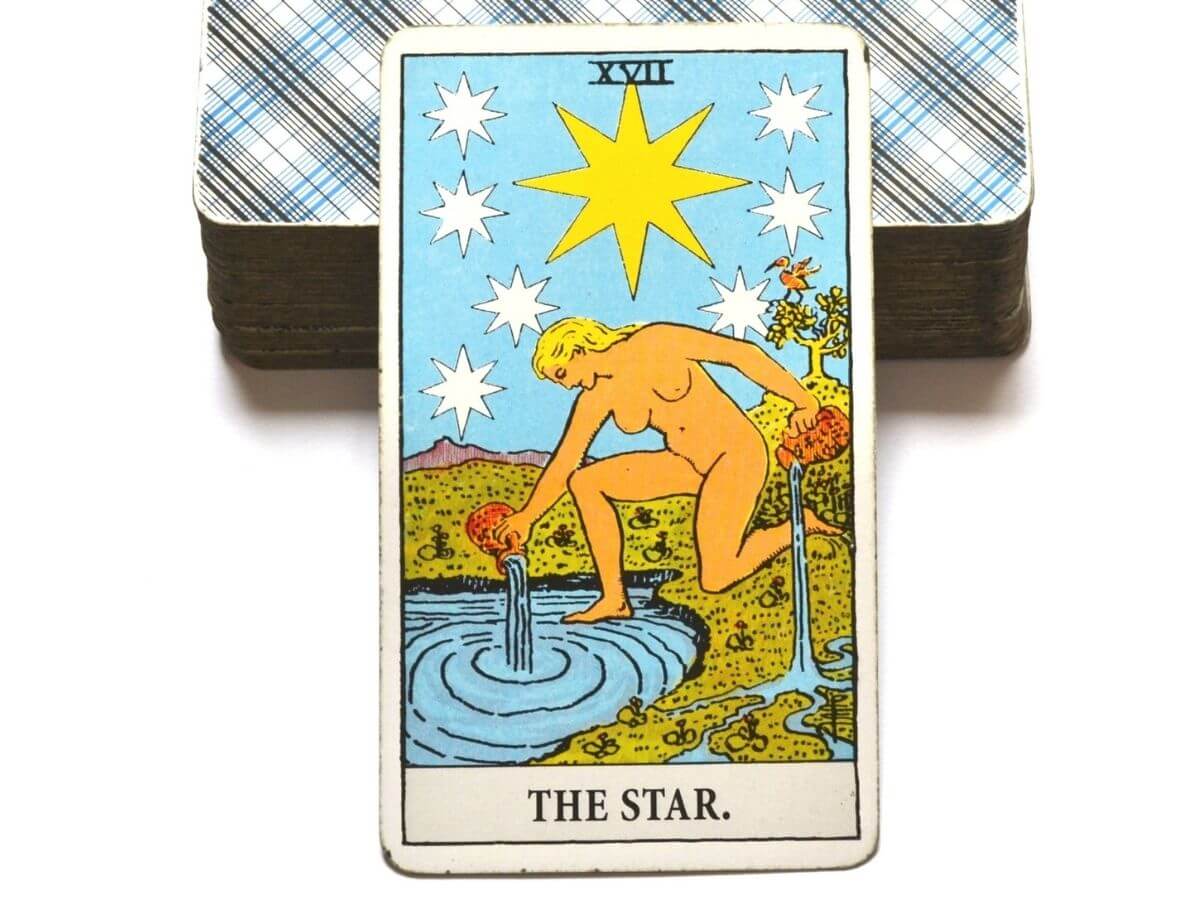