Symbolism on this trump card is primarily drawn from metaphysics, psychology, occultism and dream interpretation.

Pamela Colman Smith’s version of The Moon, in the Rider Waite deck, is closely based on the La Lune card from the Marseille Tarot deck.

Specifically, both cards depict a night scene with two large pillars. A wolf and dog howl at the moon and a crayfish emerges from the water. A large moon with a human face, casts moonlight over the scene.

What is The Symbolism of The Moon and Moon Rays in This Tarot Card?

The Moon reflects the light of the Sun and shines in the darkness of nighttime. Compare how much illumination it affords than the Devil’s torch or the blast of lightening in the Tower. The light symbolizes connection to God. When the light comes from the sun in Tarot, it is the Divine connecting with us. When the light comes from the moon, it is us, using our psychic senses, to connect with the Divine. We are making the effort.

The Moon is symbolic of our intuitive faculties and subconscious mind. At the same time, the moon represents dreams, divination, witchcraft and many other occult sciences. Correspondingly, the moon becomes associated with the afterlife, as it was once believe to be the home of the dead. It was once believed that the dying would leave their bodies, and live on the moon until it was time to reincarnate.

The moon is symbolic of the waxing and waning rhythms of life, of tides and all natural cycles. It also symbolizes feelings and emotions, which can be uncertain at times. Waite mentions, it “illuminates our animal nature … the dog and the wolf.”

Face in The Moon

The face in the moon is that of a serene lady. She cautions us to be “still”, as Waite writes, so it “may be that there shall come a calm upon the animal nature.” In other words, in uncertain times, try not to act purely on emotions or fantasies, as this can trigger an imbalance which leads to bad decisions, mood swings, depression and occasionally even madness.

Waite writes, the moon has “sixteen chief and sixteen secondary rays.” The 32 rays indicate the 32 paths of wisdom on the Tree of Life. The Moon Tarot card suggests that full understanding of these paths can be attained by calmly sitting in stillness and reflection. At the same time, a person could develop mediumship or psychic abilities.

Some authors connect the long rays to the subconscious, and the short to the conscious mind.

What is The Meaning of The Yods or Rain Drops?

The 15 falling drops of rain or dew are called yods. These drops of water are found in many other cards in the Rider Waite deck. They appear to be in the shape of the Hebrew letter yod (pronounced ya). According to the Jewish sages, the yod represents the world to come and completeness.

The yods represent the descent of life force, chi or prana – falling from a higher plane, and materializing, or manifesting in the material world.

What is The Symbolism of The Crayfish, Dog and Wolf?

The animals in this card reflect our primeval instincts and fears. Waite writes, these fears are represented by the “dog, the wolf and that which comes up out of the deeps, the nameless and hideous tendency which is lower than the savage beast.”

A crayfish or scorpion, Waite does not say which, “crawls from the abyss of water to the land, but as a rule it sinks back whence it came.”

Traditionally, this creature symbolizes what lies beneath the surface. It is a lower form of awareness, which attempts to scurry towards the path of enlightenment in the distance. It could represent early childhood fears and memories resurfacing, or fears and phobias which have no specific cause. We try to push him away, but in the quietness of the night, the vague fears resurface.

The Crayfish resembles a scorpion, the zodiac sign of Death; as well as the Egyptian scarab, which was seen as a reflection of the heavenly cycle of rebirth and reincarnation.

The Wolf and Dog are of the same species, but one is wild and the other is domesticated.

The dog is an esoteric symbol for God’s power, as the word dog spelled backwards is God.

The wolf is sometimes viewed as a sign of the Devil, or the opposite of God’s force.

Both wolf and dog are howling at the moon, signaling that all experiences, good and bad, can contribute towards a personal awakening. Bad events can be blessings in disguise, and good events strengthen our faith and make us value prayer.

What is the Meaning of The Two Pillars in The Moon Card?

The two gray towers are the same as those seen in the Death card. The twin towers represent what is ‘known’. Beyond their border stretches what is presently ‘unknown’.

Each tower has a single window, which is placed high up. Those who can ascend the heights, will be granted a vision of the road ahead. This symbolism ties the Moon card to the gift of prophecy, premonition and intuition. Note, the windows are black which connects them with occult vision.

The Landscape Symbols in The Moon Card

The green land in the foreground is symbolic of the physical world, where the Empress rules.

The path starts at the pool of water, traverses over the green land, passes through the pillars and into the blue land and mountains beyond. It could be the point at which the man in the 8 of Cups began his spiritual quest. The path may represent the journey we take in sleep, in our dreams or while in trance, astral travelling, or accessing the Akashic Records and the Book of Life. This journey is associated, also with a vision quest in shamanism.

The pool of water retains the same meaning as that presented in the Temperance and Star. It is the great depth of cosmic mind-stuff, out of which emerges memories and thoughts. We may try to forget some of those memories, even if they crawl out as crayfish.
⭐Pools of water also appear here: Temperance Symbols, The Star Symbols

On the edge of the pool are black plants, which is a mark of the occult.

The blue sky symbolizes that the Moon relates to cosmic subconsciousness.

The Ultimate Guide to The Moon Symbols 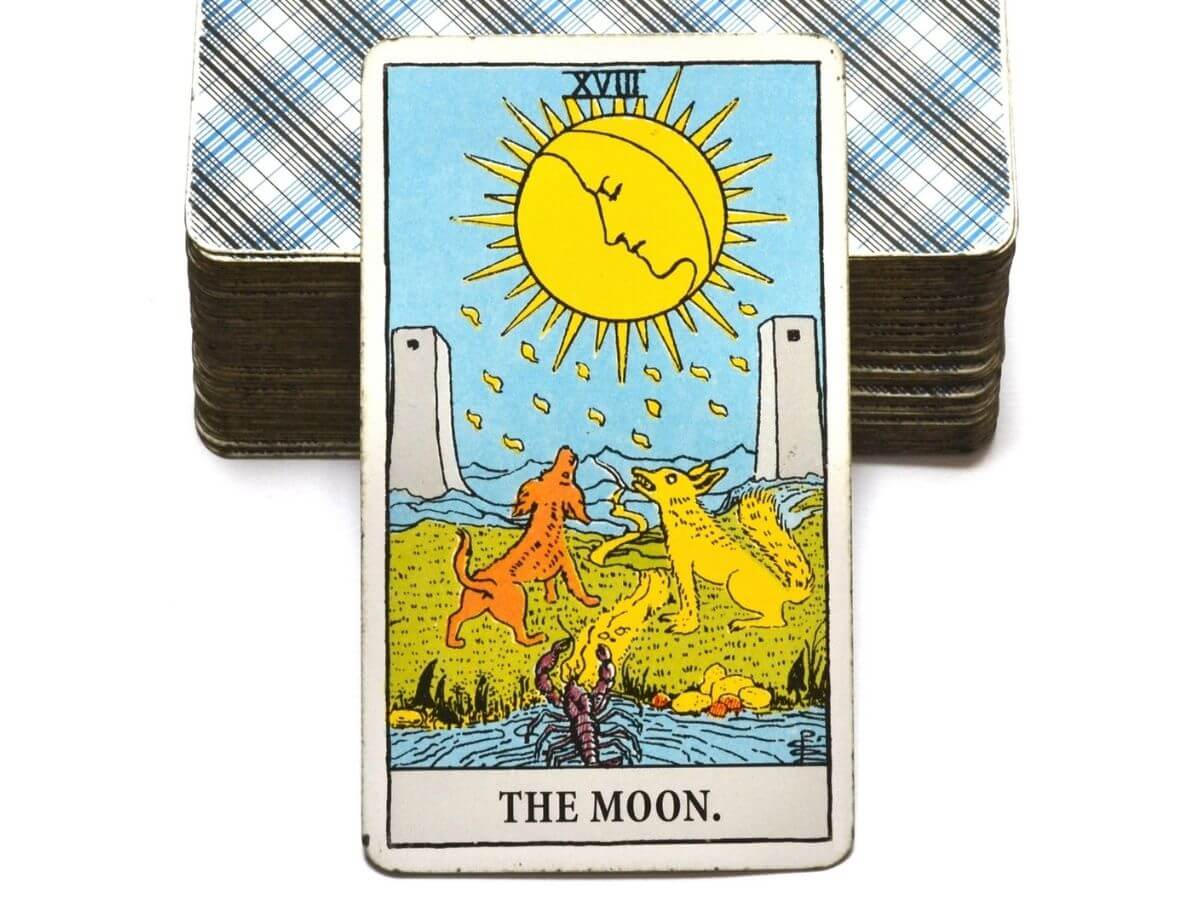