The symbolism found on this trump card is primarily drawn from metaphysics, kabbalah, western occultism and philosophy.

What Is The Symbolism Behind The Magician Card Iconography?

Historically, the Magician is shown standing at his table, dressed in expensive clothing. For example, in the Tarot of Marseille, Le Bateleur works at his table outside in nature. The curve of the man’s hat form a lemniscate, or sign of infinity, similar to the number 8 above the head of the Magician, in the Rider Waite deck. He also holds a white wand or baton.

The artist Pamela Colman Smith largely chose, or was instructed by Waite, to remain within the iconographic tradition of past with her Magician. However, in a slightly rebellious move, she inserted the image of her friend Edith Craig as the face of the Magician. (An older Edith Craig reappears as a man in the King of Pentacles symbols).

Craig was a pioneer of the woman’s suffrage movement in England, and she was the daughter of the actress Ellen Terry.

Why is The Magician Pointing Up to The Sky and Down to The Earth with His Hands?

The Magician has a white wand in his right hand and raises it towards the sky. His left hand points down towards the earth. The author A.E.Waite explains, “This dual sign is known in very high grades of the Instituted Mysteries; it shews the descent of grace, virtue and light, drawn from things above and derived from things below.”

In such a way, Waite connects this card with Neo-Platonic theory, as well as Christian Gnosticism.

The right hand draws down power, light and wisdom from the heavens. The left hand transfers this knowledge to the earthly plane, in the form of mediumship, magik, precognition and manifestation.

The gesture of the Magician’s finger with his left hand demonstrates the principle of concentration, and the ability to focus his attention on mastering his skills. We are reminded that hard work is required to achieve anything worth while.

The White Wand has two identical points to remind us, that what is above is available below. This magical wand becomes the connection between Heaven and Earth, humankind and spirit, the living and the dead.

⭐A dual wand: is also held by figure in The World Tarot Symbols.

What Tools Does The Magician Have on The Table?

On the table in front of the Magician are the symbols of the four Tarot Suits: pentacle, cup, sword and wand. According to Waite, these tools signify, “the elements of natural life, which lie like counters before the adept, and he adapts them as he wills.”

The elements of natural life, he refers to here, are fire (wand), air (sword), earth (pentacle) and water (cup). The Magician has at his disposal, all of the natural elements and their strengths: motivation (fire), intelligence (air), health (pentacle) and imagination (water).

An orange table dominates part of the image. Orange is associated with intellect and spiritual energy. The four legs of the table may represent the Four Worlds, the four categories of spiritual realms in Kabbalah. These four worlds are: Atziluth (Emanation, the unchanging Divine world), Beriah (Creation, considered ‘Heaven’), Yetzirah (Formation, the home of lower angels and men’s souls), and Asiyah (Action, the Universe we live in).

The bright yellow background in this card is symbolic of the state of consciousness required for manifestation to occur.

Yellow is traditionally associated with optimism and positivism. Yellow is also connected to the solar plexus chakra, our center of hope and inspiration. It corresponds to the element Air and is often used in Tarot to represent intellect and the spiritual mind.

What is The Meaning of The Infinity Symbol in This Card?

The horizontal figure 8 symbol above the Magician’s head is the lemniscate or sign of infinity. What goes around, comes around. Energy never dies, we are born and reborn again.

Waite refers to this number 8 symbol “as the sign of life.” He continues, that “it may be remembered that Christian Gnosticism speaks of rebirth in Christ as a change ‘unto the Ogdoad’. This mystic number is termed Jerusalem above, the Land flowing with Milk and Honey, the Holy Spirit and the Land of the Lord. According to Martinism, 8 is the number of Christ.”

What is The Symbolism of The Magician’s Clothes?

The Magician wears a red robe. Every color in this card is chosen carefully for its symbolism. Red represents fire energy and the spark of activation and manifestation. His robe has no buttons, and can easily be slipped on and off, indicative of the Magician’s ability to slip between levels of consciousness and spiritual dimensions.

The Magician wears a serpent belt, which according to Waite represents the “eternity of attainment in the spirit.”

The white robe, worn as an undergarment close to the body, is symbolic of our spiritual body (also called astral body), being close to the physical body.

There are seven pleats on the robe, which represent the seven lower sephirot in Kabbalah, a system of Jewish mysticism. These are: Chesed, Gevurah, Tipharet, Netzach, Hod, Yesod, and Malchut.

On the Magician’s uplifted right arm, there is a symbol of the Tetragrammaton. ΙΑΩ is one way of writing the name of God. This reconfirms that the Magician is drawing down power from Him, the mystic supreme force.

A white headband encircles the Magician’s forehead, in the location of the crown chakra. This draws the reader’s attention to the necessity to activate their crown chakra if they wish to manifest in their life.

What is The Meaning of The Red Roses and Lilies?

Garlands of red roses and lilies create a sacred space for the Magician to work within. As Waite writes, “Beneath are roses and lilies, the flos campi and lilium convallium, changed into garden flowers, to shew the culture of aspiration.”

Note: Flos campi translates as the flower of the field. Lilium convallium are also known as Lily of the Valley.

The Ultimate Guide to The Magician Symbols 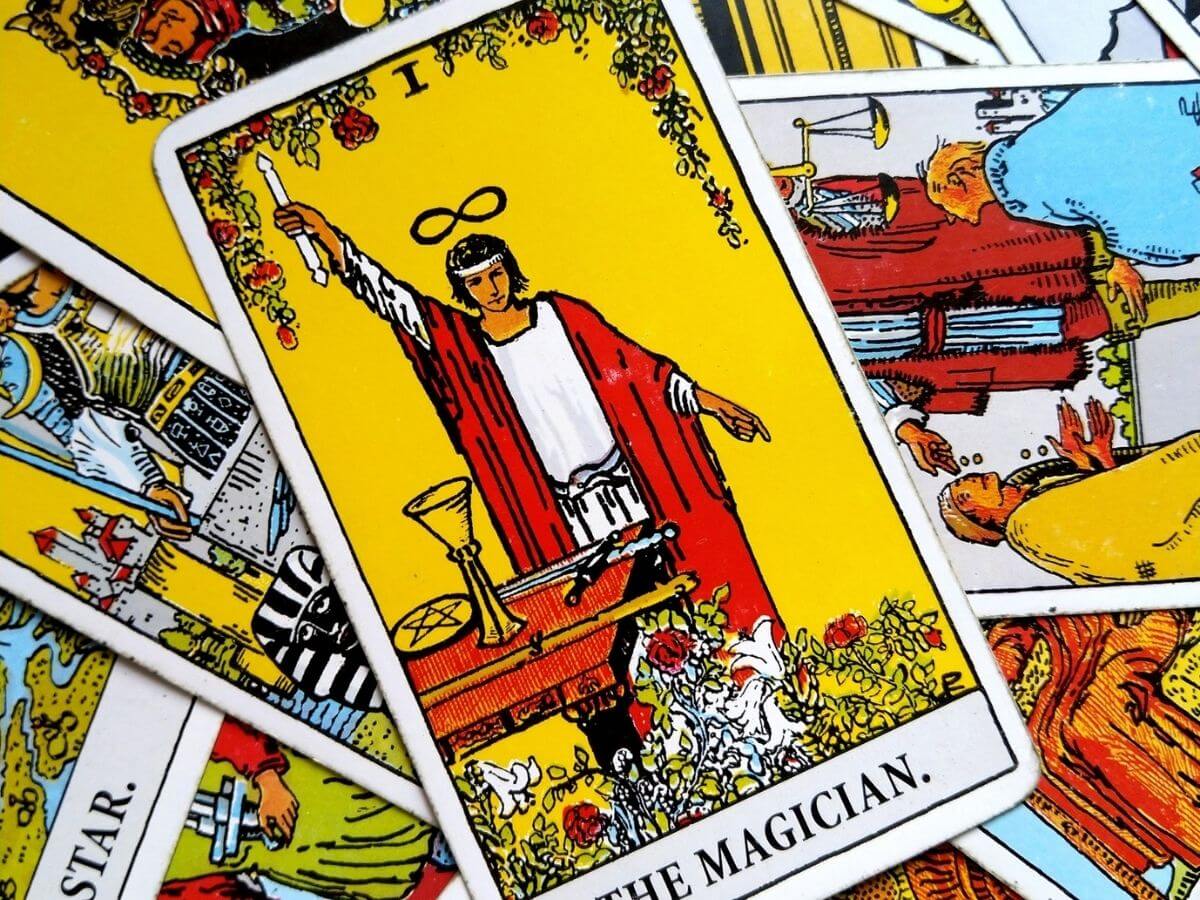