The symbolism found on this trump card is primarily drawn from Christianity, religious text, mythology, alchemy, astrology and western occultism.

Compare The Lovers to Historical Decks

In most historical iconographic depictions of the Lovers, a single man is receiving attention from two women, and he faces a choice.

The Rider Waite deck has changed the imagery for this card significantly, by reducing the number of people to two. Arthur Waite admitted, that in a first draft, he initially kept three figures, but decided later to favor two because this aligns the card with it’s Golden Dawn astrological assignment of Gemini, the twins.

However, Waite’s version still manages to echo the sense of three people. He does this by involving the angel in the card narrative. The man looks at the woman, but she looks above to the angel. This conveys a sense of divine trinity and transcendental love.

The Rider Waite version depicts Adam and Eve in the Garden of Eden. This symbolism emphasizes that one should be careful when choosing a partner, because there is no coming back from a wrong decision. Once innocence, youth or optimism is lost, it is lost.

Who is The Angel in The Lovers Tarot Card?

Waite describes a “great winged figure with arms extended,” in the Lovers Card. This angel is generally accepted as Archangel Raphael, whose name translates as “God has healed.”

Raphael spreads his arms out wide, as though to draw to the two figures below together, or in divine blessing.

As well as being a healer, Saint Raphael is the patron of happy meetings and matchmakers, which fits well with the theme of this card.

Archangel Raphael is associated with the element Air, and Gemini (an air sign). Raphael’s airy nature is emphasized by the way he floats in the air, as he emerges from the clouds. The white clouds conceal the lower part of his body, much in the way Spirit is hidden from direct view.

Green and red flames stream from Raphael’s head. Red represents conscious thoughts and the green represents the subconscious. The two flames are working together in tandem here. Flames are also symbolic of sexual passion.

Written on the angel’s hands is the Hebrew letter zayin. In the Hebrew bible, zayin means ‘weapon’ or ‘sword’, but in more modern times it has also come to mean ‘penis’. Hence kabbalists and sages see zayin as a sign of power.

A luminous yellow sun dominates the background. In the Golden Dawn color scheme, Yellow represents the Swords suit and element Air. This is a solar sun, shining at midday in full strength. We are reminded that the sun is a great light-source and radiates life into all biological lifeforms.

The wings of the angel are red, denoting that Raphael is at One with the force of Universal energy. The power charges through him. It is within his ability, to manifest a meeting and union of the people below.

Red is also the color of transformation in alchemy. Once these two lovers unite in physical union, a new life will be formed.

The Golden Dawn focused their attention on four archangels in their magic rituals; and these four angels are depicted in the Major Arcana of the Rider Waite deck. These archangels are Raphael (The Lovers), Michael (Temperance), Uriel (The Devil) and Gabriel (Judgement).

INVOKING ANGELS
The Lesser Banishing Ritual of the Pentagram (or LBRP) is a ceremonial magic ritual devised by the Golden Dawn, since popularized in modern occultism. This ritual is considered a basic preliminary to any magical work. Before spell casting or even reading your Tarot cards, you are advised to says these words:

Before me Raphael,
Behind me Gabriel,
On my right hand Michael,
On my left hand Uriel.

Who Are The Couple in The Lovers Tarot Card?

Waite writes, “In the foreground are two human figures, male and female, unveiled before each other, as if Adam and Eve when they first occupied the paradise of the earthly body.”

The two figures are symbolic of Adam and Eve, and represent “youth, virginity, innocence and love before it is contaminated by gross material desire.”

Thus the card becomes associated with desire, temptation and choice. Oh, to nibble on the forbidden fruit or not!

The implication here is that the masculine principle of intellect cannot reach spirit directly. He must go through the feminine subconscious mind of emotion. In other words, you are less likely to connect with the spirit world through logic, but rather through your sixth sense using tools such as meditation, scrying, or even reading Tarot cards.

What is The Symbolism of The Trees in The Lovers Card?

Behind the man in this picture is a black tree, which represents the Tree of Life or Tree of Consciousness. It contains knowledge on all the different archetypes of people, one might meet and or marry in life.

It has twelve leaves in the shape of flames. These are the signs of the Zodiac and each flame is further subdivided into three because astrologers subdivide every star sign into three parts called decanates. So we now have 36 different expressions of personalities.

Note: Each zodiac sign is subdivided into three decans, a decan being about 10 days. A decan helps to give a more fuller interpretation of a person’s personality. For example, if you are born in the first ten days of a particular sign (first decan), you are likely to have slightly different traits to a person born in the last ten days (third decan).

Behind the woman is the Tree of Knowledge of Good and Evil, from the Garden of Eden. It bears four red fruits (apples), these are the forbidden fruits from the Bible which Adam and Eve were told not to eat. The number four refers to the elements of fire, water, air and earth; and these elemental forces are connected to the five human senses of sight, sound, smell, taste and touch.

A green serpent climbs up the red tree trunk, and seems to whisper in Eve’s ear. Snakes are traditionally associated with sexual energy. In Hinduism, Kundalini (meaning coiled snake) is a form of divine feminine energy believed to be symbolically coiled at the base of the spine in the muladhara or base chakra. Kundalini is believed to be released through mystic practices such a meditation, and it ascends the spine towards the head and crown chakra in four loops. Notice that this serpent has four loops.

When Kundalini is trapped, then any encounter with the opposite sex is likely to stagnate at the physical level. Only when it is released can the heart and soul be touched.

What Does The Mountain in The Lovers Symbolize?

The red mountain in the background forms the shape of a phallic symbol. This has to be one of the ultimate lovers symbols, emphasizing heightened sexual tension or arousal.

We are also reminded that love can raise you up, expand your consciousness and make you feel like you’ve reached the top of a mountain peak.

The Ultimate Guide to The Lovers Symbols 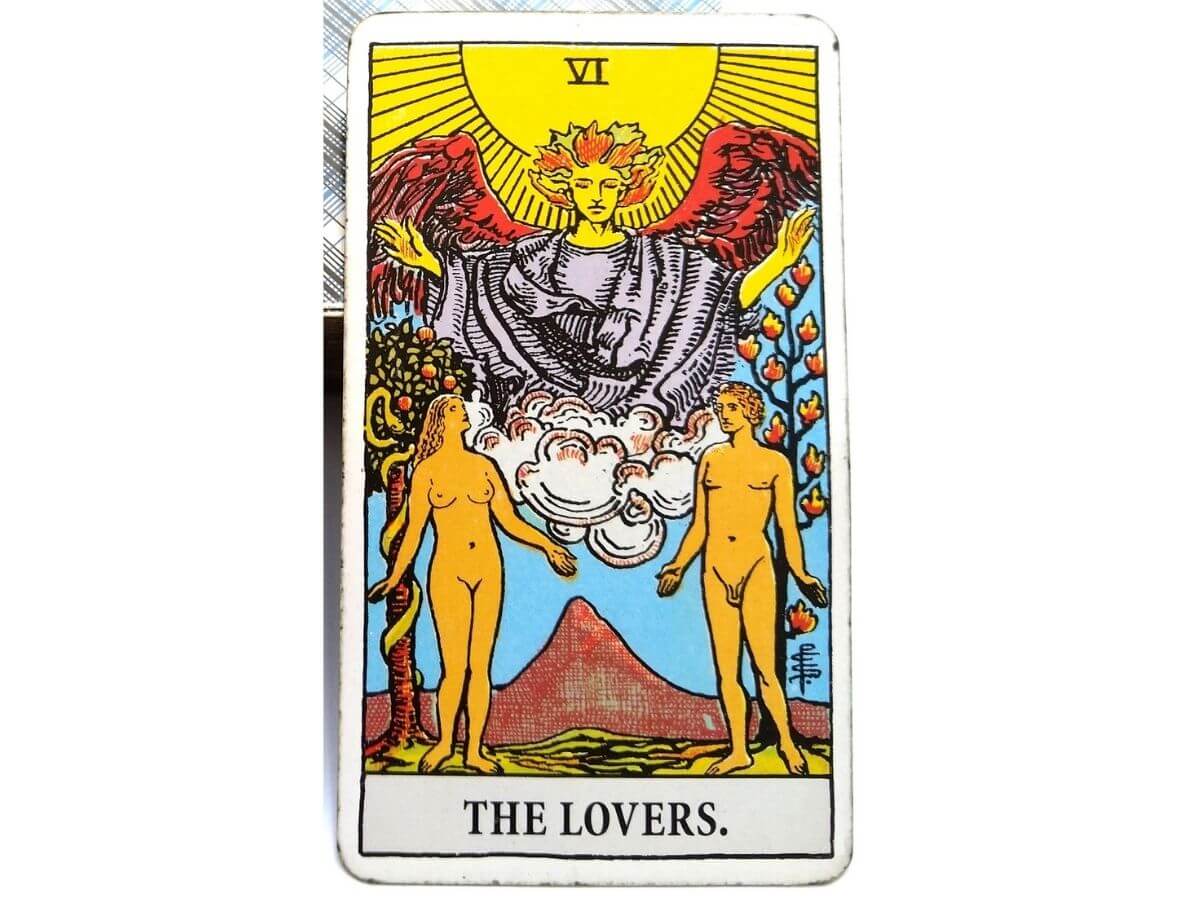