The symbolism found on this trump card is primarily drawn from ancient mythology, metaphysics, Qabalah and philosophy.

Who Influenced The Design of The High Priestess Card?

The High Priestess card is one of the most esoterically rich cards in the Rider Waite deck. We can assume that most of the esoteric symbols in this card were chosen by Arthur Waite.

Few people were as advanced in esoteric studies as Waite, and while Pamela Colman Smith was an initiate in the Golden Dawn, she never advanced with her studies to the inner circle. Waite wrote in an article in the Occult Review, that Pamela was “a most imaginative and abnormally psychic artist,” however, she still had to be “spoon-fed carefully over the Priestess Card.”

Is The High Priestess a Female Pope?

The Rider Waite version of the High Priestess card pays homage to the Popess Tarot Card from the Visconti-Sforza tarot deck, c.1450. The Visconti-Sforza Popess, may in turn, have been a reference to the story of Pope Joan, the legendary female pope of the Middle Ages who is said to have reigned from 855 to 858 by pretending to be a man. Her identity was only discovered when she gave birth.

The High Priestess is strongly connected to the concept of virginity and purity. She references Eve, Mother Mary and all the virgin goddesses throughout history.

Waite describes her as the “Supernal Mother herself” and she is a reflection of Shekinah. This word, Shekinah, in classic Jewish Kabalism represents a place where God is present. Waite writes “there is a Shekinah both above and below. In the superior world it is called Binah, the Supernal Understanding which reflects to the emanations that are beneath. In the lower world it is Malkuth – that world being, for this purpose, understood as a blessed Kingdom.”

Most interesting, he concludes that this “card is the highest and holiest of the Greater Arcana.” It seems, it even surpasses the Heirophant, the male Pope in the Tarot deck. Perhaps Waite was a feminist, after all!

What is The Meaning of The Hidden Scroll in The High Priestess Card?

The High Priestess holds a scroll in her left hand, which is partly hidden by her veil. This scroll represents hidden or ‘veiled’ knowledge. She is protecting the information, what is written is not for all eyes to see.

We are reminded here that as part of the Hermetic Order of the Golden Dawn, Waite was bound by secrecy. Even in his description of the cards, he revealed very little esoteric knowledge. Knowledge is only to be revealed to initiates of the Inner Order at the sixth initiation.

The word TORA is written on the scroll, which Waite writes represents “the Greater Law, the Secret Law and the second sense of the Word.” Tora (or Torah) scrolls, are sacred scrolls used in prayer services by Jews, and read from throughout the year on the Sabbath and holidays.

The word TORA can also be rearranged to read TARO. Perhaps this is a clue to the natural wisdom and law contained in the Tarot itself.

What is the Symbolism of The Moon Crown?

The High Priestess wears a horned diadem crown on her head. The crown is silver like the color of the Moon. It shows the crescents of a waxing and waning Moon, with a full moon as an orb in between. A lunar crescent also lies at her feet.

This is the crown of Isis, the Egyptian Goddess of motherhood, rebirth, death, birth and rebirth; as well as her predecessor, Hathor, the feminine deity of pleasure, dance and the arts.

The High Priestess wears a “large solar cross” across her chest, according to Waite. A solar cross is an ancient symbol from prehistoric times, which historians believe is meant to represent the sun. Typically however, a solar cross has a circle around it, so I’m not sure why Waite calls it a solar cross. It is much like a regular Christian cross.

What Is The Meaning of The Two Veils in The High Priestess?

Many people miss that there are in fact two veils in this card. The veil which the Priestess wears tucked under her crown, and the patterned veil which stretches between the pillars behind her.

Veils are the curtain of illusion which hide reality. In this card, the veils represents the boundaries between worlds. All mysticism and religion is an attempt to see though the veils, what lies beyond the psychical world. An occultist tries to develop his psychic and mediumship skills to penetrate the veil.

Waite writes that “the veil of the Temple is behind the High Priestess: it is embroidered with palms and pomegranates.”

The pomegranate is a universal symbol of the feminine because of its numerous seeds. It is also the scared fruit of Persephone, Queen of the Underworld, which reaffirms the High Priestess’s connection to the spirit world.

⭐Pomegrates: A similar pattern can be found on the gown of the Empress.

Green palms are symbolic of returning from a spiritual journey, and were often laid at the feet of pilgrims returning home from a religious journey.

What Is The Symbolism of The Two Pillars in The High Priestess?

The High Priestess sits between a black and white pillar. These pillars are symbolic of all the negative and positive influences in the universe. She appears serene, able to hold these forces in balance.

The letter ‘B’ means Boaz. The letter ‘J’ means Jachin. According to the Bible, Boaz and Jachin were the two pillars which stood at the porch of Solomon’s Temple, the first temple in Jerusalem.

At the top, or capital, of the pillar, we see lotus buds. They are buds, and not opened flowers. The buds are another reminder that the High Priestess is a symbol of virginity.

What Is The Meaning of The Blue Robe and Sea in This Card?

The High Priestess wears a flowing blue robe, which suggest water. Waite writes that her “vestments are flowing and gauzy” as they curve around the crescent at her feet like a tide. The garment flows like a stream of consciousness.

The implication is, being in her presence feels cleansing and healing. This is what it feels like to be in the same room as a holy person.

The Priestess has her back turned to an expanse of water. There is a connection here to the moon, as the moon’s gravitational pull generates high tides and low tides. The suggestion here is of a ‘greater force’ influencing our lot in life.

⭐A person also has their back turned to water here: Two of Swords symbolism and Two of Pentacles Symbols

The Ultimate Guide to The High Priestess Symbols 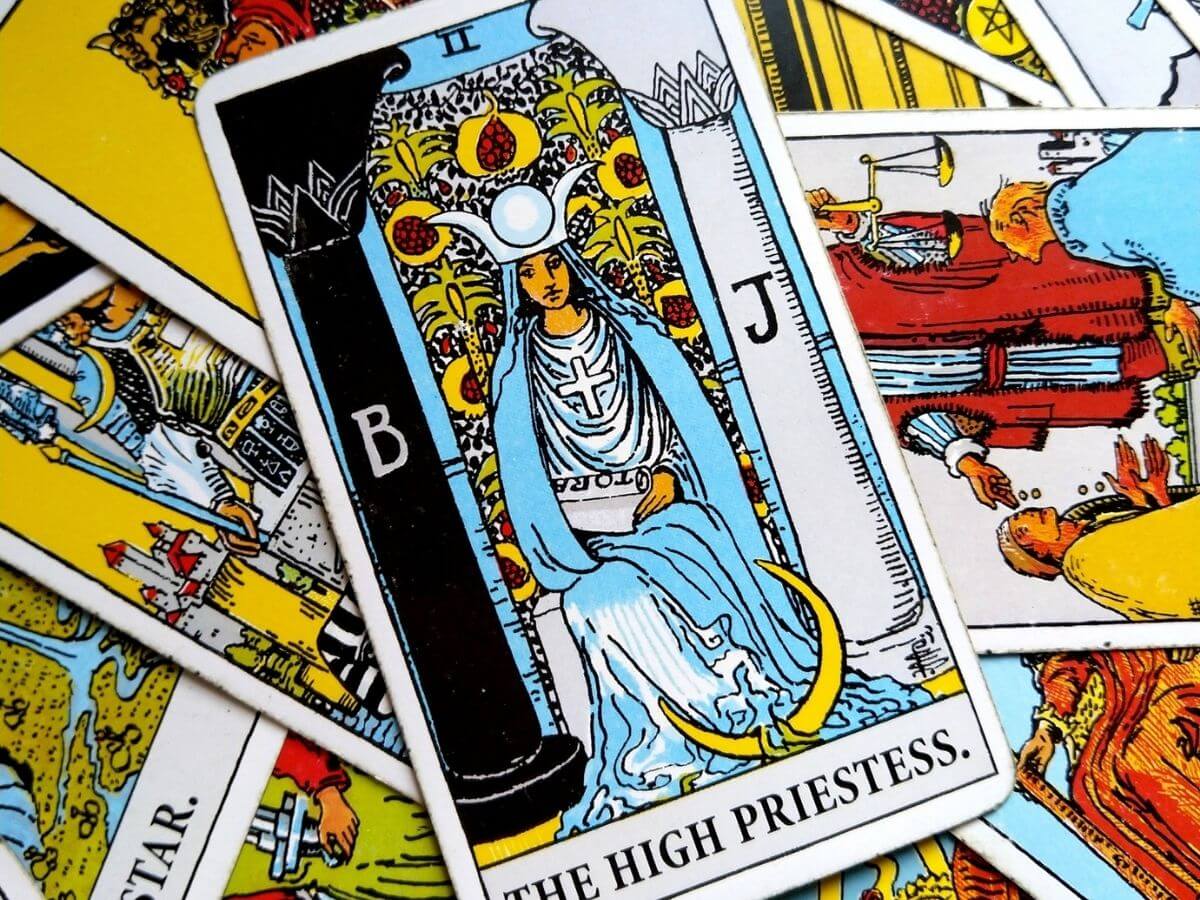