The symbolism found on this trump card is primarily drawn from astrology, alchemy, western occultism and Buddhism.

The Rider Waite version of the hermit retains much of the iconography of older Tarot decks. We see an old man, with a long white beard, hunched over a walking stick.

Waite writes, that the only “variation from the conventional models in this card is only that the lamp is not enveloped partially in the mantle of it’s bearer”.

We can see how the lantern is partially hidden in the Hermit’s coat (mantle) in the Marseilles Tarot.

Traditionally the lantern contains a candle or hourglass, but in the Rider Waite version, it has been converted into a six-pointed star.

Who is The Hermit and What Does He Symbolize?

An old man, stands at the edge of the same mountain-top seen in the Fool. Like the Fool, he is a wanderer but he is no longer young, and he no longer looks back over his shoulder. The Hermit has assimilated the experiences of the past and he does not need to scan the horizon for the future. He knows that wisdom comes from being present.

The Hermit is viewed as the traditional mystic, wise-man, shaman or oracle. He may also be considered the Most Holy Ancient One, “which ever watch, and sleep not” [Kabbalistic text]

He is a symbol of ageless wisdom, standing on the mountain of attainment. Yet, he represents those of us who seek enlightenment because he is the eternal pilgrim soul. His status is attainable to the devoted, which is why Waite points out that the Hermit says, “where I am, you may also be.”

The Hermit is assigned to the sixth letter of the Hebrew alphabet, Yod, which in turn is assigned to Virgo and the 6th House in astrology, which corresponds to health and wellness.

The Hermit’s cloak is plain and discreet. In some decks, he partly covers the lantern with his sleeve, as though to protect the Truth of the Source from unworthy eyes.

The cloak covers his head, not because he is cold, but as a mark of devotion and respect. He is in commune with God.

What is The Meaning of the Star in The Lantern?

The lantern is the Lamp of Truth, which the Hermit holds up to guide others on their path in life.

The light source within comes from a six-pointed star, possibly the Seal of Soloman.

The Seal of Solomon, also known as Ring of Solomon is a legendary ring belonging to the Israelite King Solomon. In Jewish mysticism and Western occultism, the myth is, that the ring gave Solomon the power to command the supernatural, and the ability to speak with animals.

The Seal was often depicted in the shape of a hexagram, or six-pointed star. This star is the predecessor of the Star of David, associated with Jewish people. Due to it’s rich history, the Seal of Solomon came to be considered a valued talisman in magick, occultism and alchemy.

The six points of the star hint also at Virgo, the sixth sign in the zodiacal series.

The sky gray, represents the moments before dawn or first light.

In grander terms, the darkness signifies the moment before creation. In Genesis it says, “And God said, Let there be Light.” God spoke those words when he was still in darkness.

The pure white snow represents a blank page, the time before the Big Bang and creation.

The snow also marks the isolation the Hermit endures, because his wisdom sets him apart from others.

The Hermit encourages the sitter to practice meditation. He could be doing Samatha, a meditation technique of focusing on a singular object in order to calm the mind. Samatha is part of a series of steps to a meditative consciousness and spiritual awakening.

What is The Meaning of the Hermit’s Golden Wand?

In his left hand, the Hermit holds a golden wand. This is the same wand that the Magician had upon his table. Now however, the wand has become a familiar friend and the Hermit knows he can lean upon it for support. This suggests he has achieved mastery of his magical arts.

The wand also appears to be used as a walking stick, which reminds us of the Eight of Cups. The Hermit could in fact, be the man who left everything behind to wander over the mountains, only many years later.

The Ultimate Guide to the Hermit Symbols 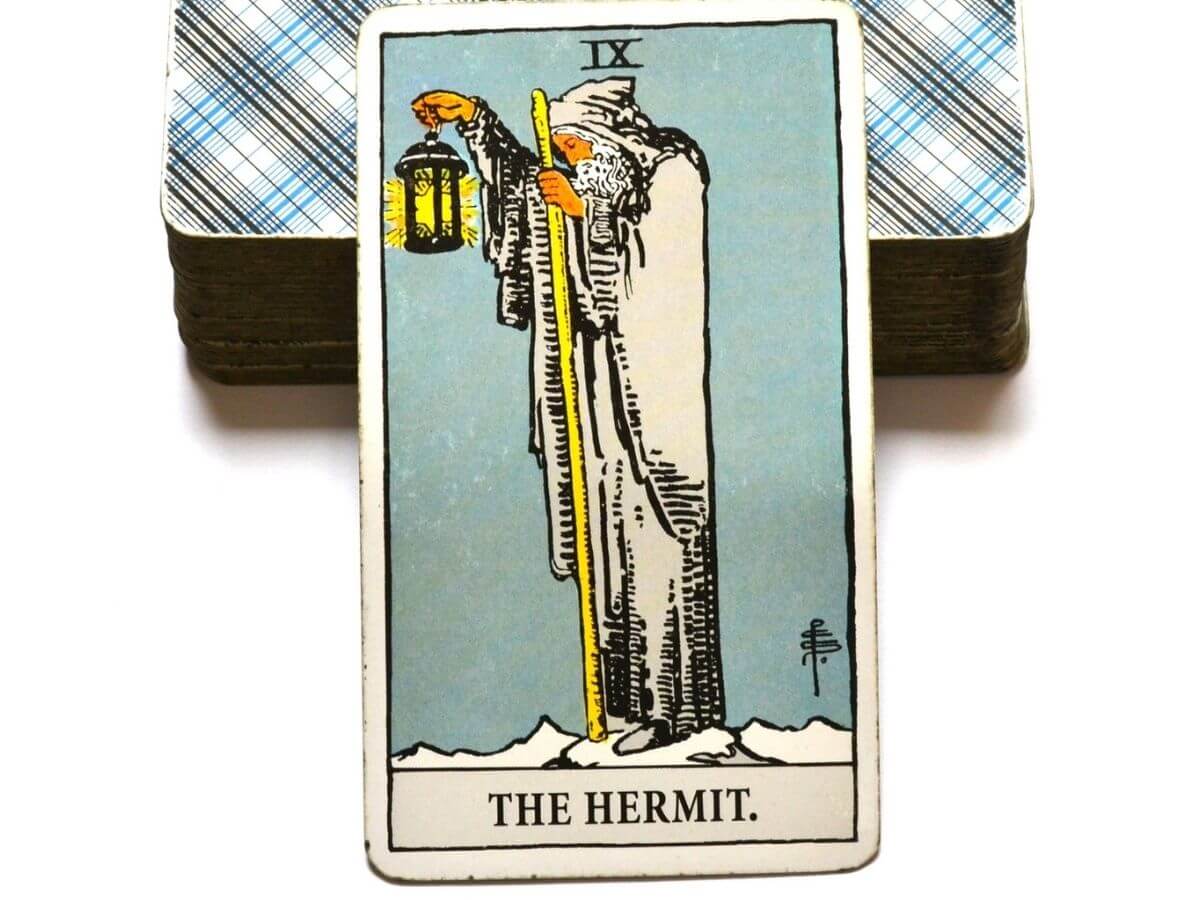