The symbolism found on this trump card is primarily drawn from alchemy, religious text, metaphysics and western occultism.

Arthur Waite describes Pamela Colman Smith as “an abnormally psychic artist … who had drifted into the Golden Dawn and loved the Ceremonies,” in his book Shadows of Life and Thought (1938). He further pointed out however, that she had to be “spoon-fed carefully over the Priestess Card, over that which is called the Fool and over that the Hanged Man.”

It is certainly true that few Tarot deck creators were so well informed about esoteric symbols as Waite. That said, he stays consistent with the iconography from older decks, such as the Visconti Sforza, in his version of the Hanged Man.

Traditionally, in older Tarot decks, a man hangs upside down. His face is calm, suggesting that this is a voluntary act. His arms are tied behind his back and one leg is bent behind the other.

Who Does The Hanged Man Represent?

A man hangs from a tree, in the style of pittura infamante, a type of Renaissance painting which depicted men of importance who had fallen out of favor, hanging for public humiliation.

The calm expression on the Hanged Man’s face in Tarot, traditionally however, suggests that he is there by his own accord. Waite writes that his “face expresses deep entrancement, not suffering.”

The key meaning of this card is sacrifice: the act of voluntarily giving up something in order to get something of greater value. The Hanged Man is the Fool – notice the same blond hair, further along in his life journey (The Fool’s Journey).

Now, the Fool realizes that even greater knowledge lies within him, rather than in the world around him.

He is on the search for spiritual enlightenment, through meditation. This is the yogi’s pursuit of Nirvana, the shaman’s vision quest, a floating state of freedom.

Waite explains, “He who can understand that the story of his higher nature is imbedded in this symbolism will receive intimations concerning a great awakening that is possible, and will know that after the sacred Mystery of Death there is a glorious Mystery of Resurrection.”

What is The Symbolism of The Tree in The Hanged Man?

The gallows is made from a cut tree. The wood of the tree has leaves, which means it is living and growing. The tree thus becomes a symbol of cosmic law: the concept that nothing really dies, energy simply transforms into something else. This connects the tree to the Resurrection.

The gallows forms a Tau cross, also known as the Cross of St Anthony, as well as crux commissa. The Tau is one of the oldest iconographic representations of the Christian cross.

According to Waite, from the position of his legs, the Hanged Man, forms a fylfot cross. The fylfot cross is a type of swastika which is associated with medieval Anglo-Saxon Christianity. From the 14th century, it was often used to decorate Eucharistic robes.

What is The Symbolism of The Crossed Legs in The Hanged Man Card?

The Hanged Man crosses his legs, forming the shape of another cross. Traditionally, the cross is connected with sacrifice – Jesus died on the cross of our sins.

The man hangs by his right foot to the tree. The right side reflects how one relates to the world and other people, and the left side relates to self and Spirit. His left foot is free, representing freedom to explore spiritual growth and understanding.

The lines drawn from the elbows of the Hanged Man to the point at the top of his head, form a reversed triangle. The triangle on top of a cross, is the alchemy symbol for Sulphur.

Sulfur, is one of the three prime materials of alchemy and it represents evaporation and dissolution. In terms of the human body, it represents the soul.

There is a halo, which Waite calls a “nimbus”, about the head of the Hanged Man. Christian iconography uses the halo, a glowing sphere around the head chakra, to signify saints, holy people and enlightenment.

Forty black lines radiate from the halo. In religious text, the number 40 is symbolic of spiritual or shamanic journeying. Moses stays on Mount Sinai for 40 days and nights (Exodus 24:18). Jesus fasted forty days and forty nights in the Judean desert. In Judaism, the prophet Elijah had to walk 40 days and 40 nights before arriving at mount Horeb.

Additionally, Kabbalah assigns the number 40 to the Hebrew letter Mem, which is given to the Hanged Man card.

The man’s hands are tied, implying that this is a time for contemplation, and not action.

What is The Symbolism of The Blue Tunic and Red Tights?

The upper garment of the Hanged Man, a blue tunic or doublet, echoes the blue of the High Priestess. Blue represents water, and Pisces, the zodiac sign assigned to this card. The tunic has pockets on both sides, fastened with ten buttons, referring to the ten Sephiroth.
⭐Blue robe also appear here: High Priestess Symbols

The man wears red tights, which echo the red of the Magician’s red robe. This indicates that there is some intention, he knows what he wishes to manifest.

The Ultimate Guide to The Hanged Man Symbols 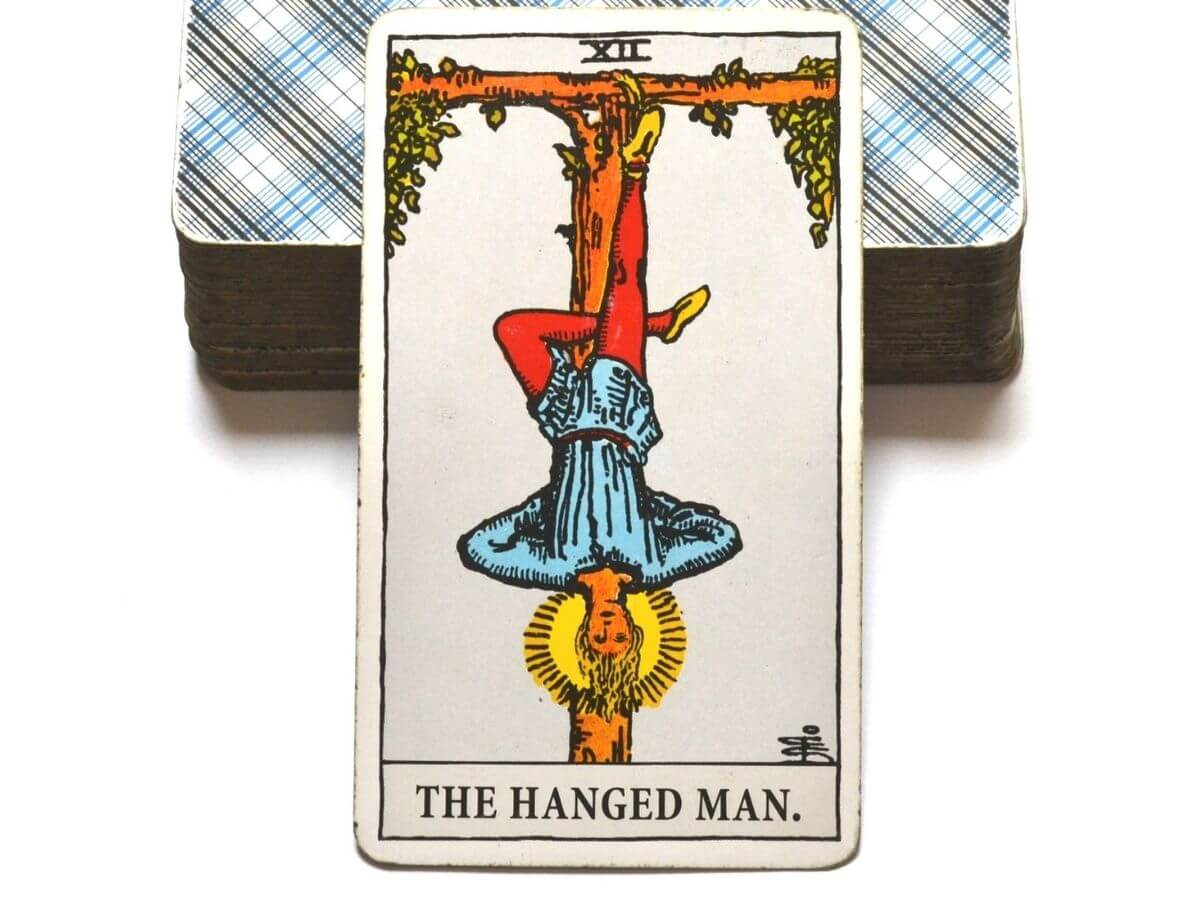