The symbolism found on this trump card is primarily drawn from mythology, astrology, kabbalah, and western occultism.

Historically, the Empress is seen seated on a throne, scepter in hand and crown on top of her head. The Rider Waite Empress follows this traditional symbolism.

Here we see The Empress from the Marseille Tarot deck, popular with the famous French cartomancers Gerard Encausse and Eliphas Levi. In a divination reading (fortune telling), this card has always been viewed as delivering a positive outcome for the sitter.

What Is The Meaning of the Crown and Twelve Stars?

The stars represent the 12 signs of the zodiac, as well as the 12 hours of day and night. Thus the Empress becomes symbolic of the seasons, growth, decay and the passage of time.

The hair of the Empress is yellow, like the Fool. This implies solar energy and radiance. Both characters, the Fool and Empress radiate sunny positive vibes, optimism and good health.

⭐Yellow hair can also be found: The Fool Symbols

What is The Meaning of The Scepter and Shield?

Arthur Edward Waite writes, “The scepter which she bears is surmounted by the globe of this world.” She is “all that is symbolized by the visible house of man.” In other words, unlike the High Priestess who glides between this world and the next, the Empress is very much connected to earth. This is why she is associated with Taurus, a practical and sensual zodiac sign.

To emphasis this point, Waite points out that the Empress is “not Regina coeli” – a Latin reference to the Virgin Mary as Queen of Heaven. Rather, he states she is still “refugium peccatorum”, The Virgin Mary as the refuge of sinners.

In other words, the Empress is more down to earth and real. She is not “the soul that has attained wings,” Waite concludes. The Empress is someone we can aspire to be, in this life.

A heart shield lies at the foot of the Empress. The shield bears the astrology glyph of Venus, ruler of Taurus. Venus was a mythological Roman Goddess associated with love, beauty and desire.

What Are The Symbols on The Gown of The Empress?

The Empress wears a white dress decorated with pomegranate fruits. The pomegranate is a universal symbol of fertility because of its numerous seeds. It is often assumed that the Empress hides a pregnant belly beneath her dress, because she is the archetypical mother. Her pregnancy can be read in the literal sense, but also metaphorical when it comes to interpreting this card in a Tarot reading. She can also represent the birth of creativity and good ideas.

⭐Pomegranates can also be found: The High Priestess symbols

The Empress wears a necklace around her neck. Pearls are associated with words of wisdom.

What Is The Symbolism of The Landscape in The Empress Card?

A ripe field of yellow wheat stretches before the Empress. For centuries, wheat has been considered a symbol of wealth, luck and prosperity because of it’s importance as a crop for feeding populations. Blooming fields of wheat crop were a sign of the earth’s fertility.

Women were closely associated with wheat, because they used it to make bread to feed their families. This is why, historically, one often finds wheat patterns stitched into women’s clothing.

This is the same yellow sky of the Magician card. Yellow represents the subconscious mind, and the power of manifestation and law of attraction. You attract what you think. Healthy thoughts, create a healthy field of wheat.

The green trees of the forest are a symbol of Nature’s bounty.

In total there are ten trees, symbolic of each sephirot or emanation in Kabbalah. Two of the trees are lighter in color which are symbolic of the two highest chakras which provide our channel to the spiritual world, and manifestation. These chakras are the third eye chakra and crown chakra.

The blue waterfall which gathers in a pool, in a subtle reference to the act of love making and the combining of male and female energies to create a new life.

The Ultimate Guide to The Empress Symbols 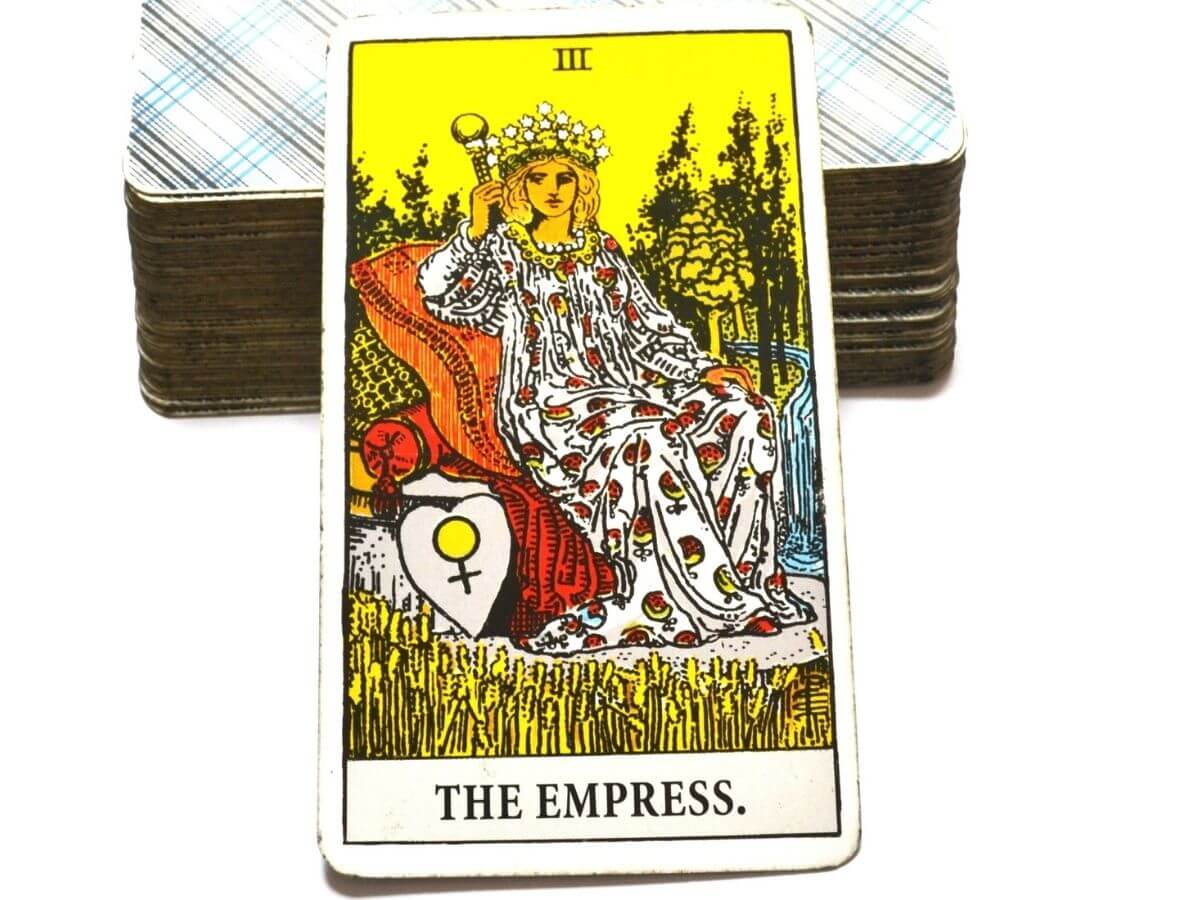