The symbolism found on this trump card is primarily drawn from the Hermetic Order of the Golden Dawn, astrology and alchemy.

Compare The Emperor to Historical Decks

Traditionally, the Emperor is considered an archetype of maturity, and male authority. He is depicted with a white beard, sits on a throne and holds a scepter tightly in his right hand.

Pamela Colman Smith remains close to tradition in her version of the Emperor in the Rider Waite Deck. She may also have been influenced by the Emperor from the 15th century Visconti-Sforza Tarot, which depicts a ruler with a long white beard (reflecting ripened wisdom) who additionally holds an orb in his left hand.

What do The Rams Heads Mean in The Emperor Card?

There are four rams’ heads carved into the stone throne; two on the armrests, and two on the back of the throne. A fifth ram can be found stitched into the Emperor’s cloak, over his left shoulder. The ram is the symbol for the zodiac sign Aries, and we are to understand that this card is symbolic of everything that Aries represents.

Aries is the first fire sign in the zodiac. It is a cardinal sign, ruled by the planet Mars. Astrologers link Aries to rulership, government and leadership.

The color scheme in this particular card, is very Martian-like. We see lots of rusty orange and red, set within a bleak mountainous backdrop which reminds one of the surface of Mars. Astrologically, Mars rules military affairs, and activities with steel and iron.

The Golden Dawn system attributes red to both Aries and Mars. Red is also the color of transformation in alchemy.

Interesting: This Tarot card is associated with pyrokinesis, the ability to control flames and fire with your mind; as well as petrification, the power to turn a living person into stone (like the stone throne the Emperor sits upon).

What is The Symbolism of The Emperor’s Armor and Crown?

The top of the crown has an infinity sign. Like the Magician, the Emperor is conscious of karma, the metaphysical and the spiritual realm. This Emperor is no shaman, he is much too grounded, but he would certainly admit to experiencing moments of sixth sense, dream telepathy or premonitions before battle.

The Emperor is clad in steel armor. This corresponds to iron and steel, which are the metals of Mars. The armor implies that he has waged battles and won.

In Tarot, the presence of armor also suggests a state of readiness. If the Emperor tossed aside his red cloak, he would be instantly prepared for battle. In this respect, he shares similarities to the King of Pentacles, the only other King in the Rider Waite deck to wear armor.

Notice that his armor is blue is color. For Golden Dawn magicians, colour was of prime importance. Colour was considered the instrument of a change in consciousness. Blue and red were considered the traditional colors of the male and female energies which come together to create new life. The Emperor wears blue, and the Empress wears a white dress with red fruit.

As the Empress is mother, so the Emperor is father, giver of life, sower of the seed. As Waite writes, “He is the virile power, to which the Empress responds.”

What is The Emperor Holding in His Hands?

Waite describes the Emperor as holding a “Crux ansata for his scepter and a globe in his left hand.” The Crux ansata is a Latin term for a cross with a loop or handle on the top. It is also known as the ankh cross. An ankh is a sacred symbol which alludes to the manifestation which occurs by combining divine opposite forces, such as male and female energies.

Traditionally, what is held in the left hand represents dominion, or what the person rules over. The globe the Emperor holds in his left-hand refers to his dominance over the natural world.

What is The Symbolism of The Background in The Emperor Card?

The orange sky is another reference to the exaltation of the Sun in Aries. According to the Golden Dawn system, yellow or gold represents the Sun, and red symbolizes Mars, the ruling planet of Aries. Combine yellow and red and we create orange.

Huge mountains loom largely, reflecting the heights of the power the Emperor has attained. The mountains become a robust defense system, indicating how secure and fortified his position has become.

A small river flows in the background, behind the throne. Water is a symbol of the feminine and harbinger of life, necessary even in this masculine environment for life to survive and propagate.

The Ultimate Guide to The Emperor Symbols 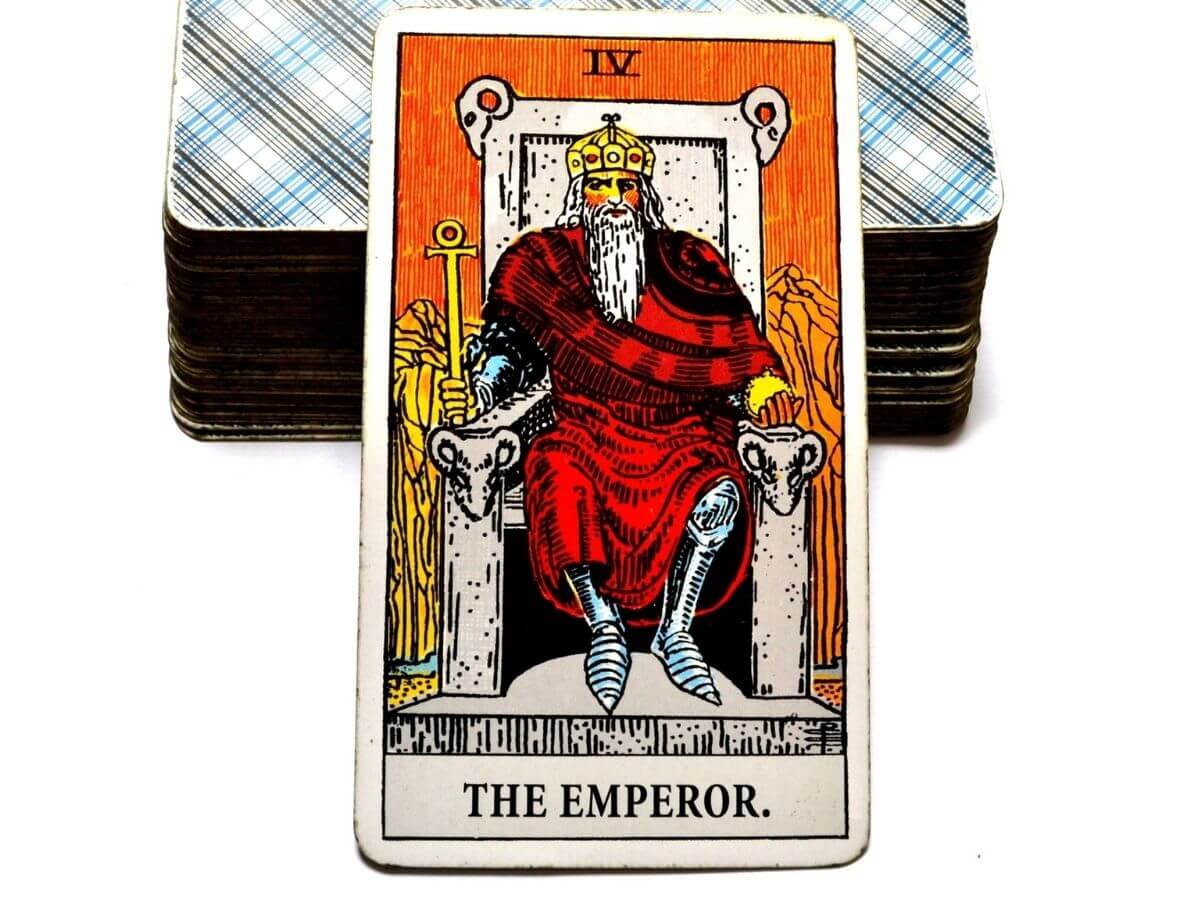