The symbolism found on this trump card is primarily drawn from occult, mythology, alchemy and astrology.

A.E. Waite drew graphical inspiration for his Devil, from Eliphas Levi’s famous illustration of “Baphomet” or the “Horned Goat of Mendes”. This illustration is found in Dogme et Rituel de la Haute Magie (1855) – a book on ritual magic which Waite had translated into English.

The Devil in both Levi’s and Waite’s illustration, squats on a pedestal, his right hand raised towards the sky and left hand lowered to the ground, imitating the Magician’s hand gesture. The creature is half human and half beast.

In older decks, such as the Tarot de Marseille, the Devil is portrayed with human facial features on his body, bat wings and horns protruding from his head. Waite draws on the iconography of this deck, by incorporating the two enslaved people in chains.

What is The Symbolism of The Horned Devil with Bat Wings in This Tarot Card?

The image of the Devil as a horned and hooved beast originates with Pan, the ancient mythological Greek god of the wild. Pan had the legs and horns of a goat, and was often seen in the company of attractive nymphs. His untamed nature personified the primitive instinct of man and he was worshipped for his virility. Then, along came Christianity and his improper persona was transformed into the Devil. The Devil is the polar opposite of the Temperance Angel.

In medieval Europe, angels like Archangel Michael, were depicted with feathered wings. Satan, the fallen angel, however was given bat wings, because bats fly at night and represent darkness. Bat wings thus represent the power of darkness.

The Devil is traditionally depicted with the horns of a goat. The goat also connects this card to the sign of Capricorn.

The Devil has been given donkey ears to represent stubbornness and obstinacy.

The Devil has reddish colored skin. This is a reference to the fires of hell.

The Devil has a navel, or bellybutton, which implies he was born. This is a subtle Tarot reference, and points to the Devil being borne of man-made fiction. He does not really exist, but rather, he is an allegory of the darkness within us all.

Waite also adds that “At the pit of the stomach there is a sign of Mercury.” – although I struggled to find this particular symbol on inspection of the card.

An inverted pentagram (one point down and two points up) is associated with evil. The placement of the inverted pentagram on the Devil’s head, signals evil thoughts. The pentagram is also a symbol of man, and it’s inversion suggests that man is not as important as he thinks he is. His place in the Cosmos, his life, is not particularly significant.

What is The Meaning of The Position of The Devil’s Hands?

The Devil raises his right hand, fingers separated in the sign of black magic. This gesture seems to mock the Hierophant, who raises his hand in benediction.

On the palm of the Devil is the astrological symbol of Saturn, the planet of limitation and therefore ignorance.

The Devil holds a torch in his left hand. The torch is inverted so that it burns wastefully, giving no light. The background is black and dark. This is in contraction to the Magician, who draws on the light of illumination, which is why his background is bright yellow.

What Do The Man and Woman in The Devil Tarot Card Symbolize?

Waite writes, the two figures, male and female, are analogous with “Adam and Eve after the Fall.”

This is the man and woman from The Lovers card – after innocence has been lost. They have been thrown out of Eden and become infected by the power of Devil, which is why they have grown horns and sprout tails.

Waite says, “The figures are tailed, to signify the animal nature, but there is human intelligence in the faces, and he who is exalted above them is not to be their master forever.”

The woman’s tail is sprouting grapes, suggesting over-consumption of wine. She has not heeded the guidance of the previous Tarot card, Temperance. The man’s tail is the red of Mars, and shaped like a scorpion, denoting a fiery temper, and unchecked sexual appetites.

Both figures have red hair which looks like a wig. In ancient Rome, one way to distinguish characters in a play was by their wig color. Black wigs represented young men and red wigs represented slaves. There may be a subtle reference here, to the man and woman’s enslavement to the Devil.

What do The Chains Represent in The Devil Card?

The chain binding the man and woman to the pedestal “represents the chain and fatality
of the material life”, according to Waite.

The chains are loose and the couple’s hands are untied, so they could easily free themselves. Which leads us to believe that these bonds are self-imposed, and the couple do not want to leave. They have fallen prey to temptation, and prefer to be bound by the physical senses, half-truths and darkness.

There is also an implication of laziness, the couple would prefer someone else to do their thinking for them. So many people are lazy in thought, preferring to switch on the TV, rather than think too much about their life or the world around them.

What is The Meaning of The Black Background?

The background is pitch black, there is total darkness. Traditionally, black is associated with evil, witchcraft and that which is hidden or occult.

The Ultimate Guide to The Devil Symbols 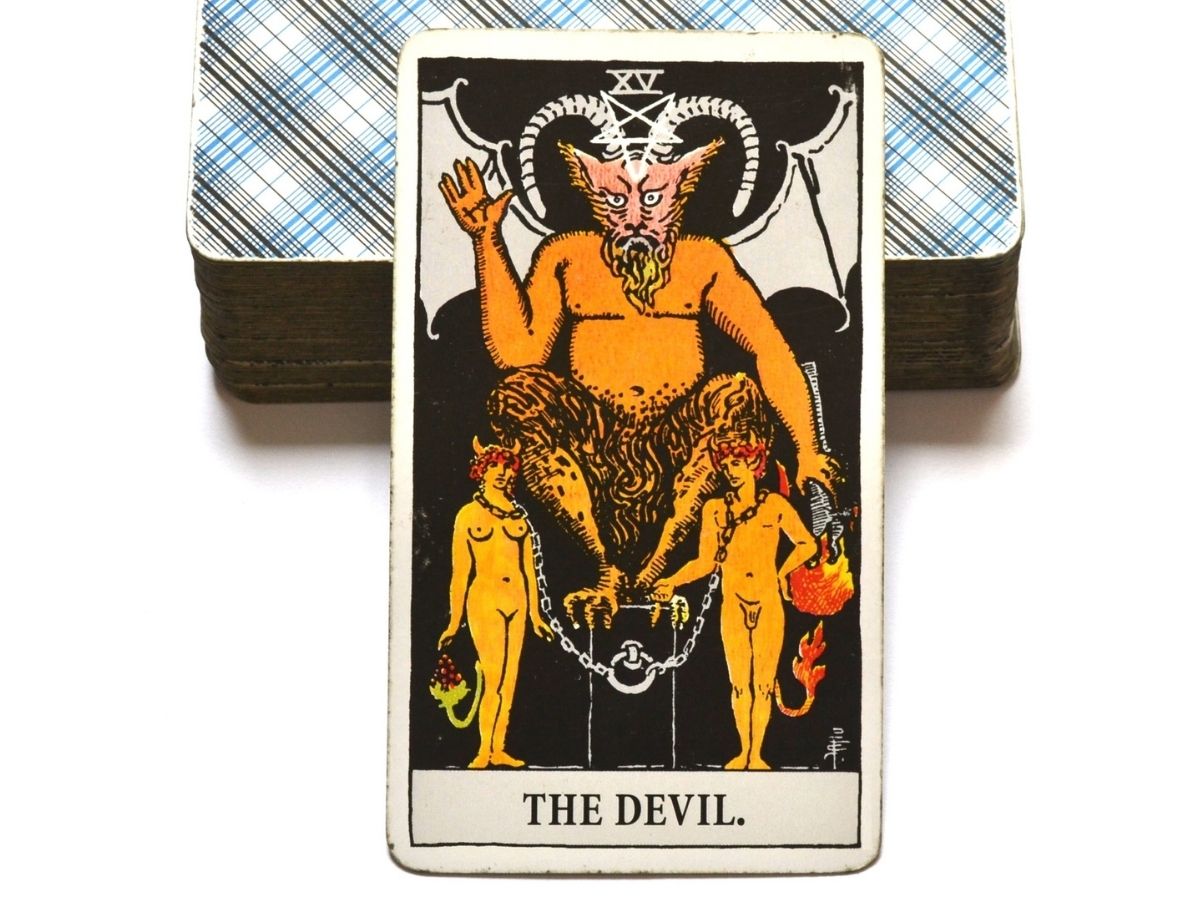