The symbolism found on this trump card is primarily drawn from mythology, astrology, religious text, metaphysics and western occultism.

Compare The Chariot to Historical Decks

In most historical iconographic depictions of the Chariot, a princely figure is drawn in a carriage by two animals, he holds a scepter in his hand and his shoulder pads depict images of Urim and Thummin. The Rider Waite version of the Chariot, sticks fairly close to this structure.

What is The Symbolism of The Charioteer’s Clothes?

This charioteer’s clothes are richly draped in esoteric symbolism.

Waite writes, “On the shoulders of the victorious hero are supposed to be the Urim and Thummim.” In the Hebrew Bible, Urim and Thummim were sacred breastplates worn by the High Priest to communicate with God. The plates are connected to divination, in particular cleromancy, a form of receiving guidance by casting lots. It was believed that the will of God would be revealed, through the plates, in the form of a yes or no answer. When asked a question, the truth would either be granted in a vision to the Priest who wore the breastplates, or one of the jewels in the breast plates would light up to signal a particular response.

⭐Interesting: Joseph Smith, the founder of the Mormons claimed to receive spiritual knowledge from two seer stones called Urim and Thummin in 1827.

On the charioteer’s shoulders, we also see two lunar crescents, signaling the Moon and its related zodiac sign of Cancer, which the Golden Dawn attributes to this card.

The charioteer wears a Crown with an eight-pointed star. This is the star of destiny. It means, he is embracing his destiny and what is ‘written in the stars’. This message is echoed in the stars in the canopy over his head.

Our hero wears a victory laurel or wreath on his head, symbolizing he has just triumphed over some obstacle.

⭐Laurels also appears in these Tarot cards: The World Symbols, Ace of Swords Symbols, Six of Wands Symbols and Seven of Cups Symbols.

The charioteer wears a belt of the Zodiac. The decorations on the belt are not clear, except for the astrological symbol for Cancer. The slanting position of the belt is a reference to the ecliptic plane, or path that the Earth takes around the Sun every year.

He wears a skirt which is divided into eight parts, ornamented with geomantic symbols. These primary symbols used in divinatory geomancy can be used to make magical talismans. The symbols are connected both to astrology and the ba gua used in Chinese I Ching.

On the chest of the charioteer is a white square amulet which is reference to the number four (4 even sides to a square). The number four is symbolic of orientation and direction, in contrast to the circle, which symbolizes limitlessness.

He holds the wand of power in his right hand, but his grip is loose. This is not a man who feels the need to ‘grip’ onto power by force. Rather, his authority and reputation begin to precede him.

What is The Meaning of The Chariot and Star Canopy?

The canopy of stars over the charioteer’s head point to celestial influences and metaphysical forces hanging over him. Destiny continues to impact the timing of his victories. However, as we have already discovered, it is clear that the charioteer is a person who is comfortable with divine timing and destiny.

The red shape on the coat of arms is called a Lingam-Yoni or Shiva linga. It is a Hindu sign for the union of positive and negative in action. Red represents action in the Rider Waite deck. The Lingam is a symbol of male and female energies working in harmony, represented in Chinese philosophy by Yin and Yang.

Just above the Lingam-Yoni is a golden globe with a pair of blue angel wings. These are the wings of inspiration, and represent ideas and dreams taking flight.

What do The Sphinxes Symbolize in The Chariot Card?

The Sphinxes symbolize the opposing forces of male and female. The white sphinx has a male head and a female body, and the black one has a female head and male body. This represents occult equilibrium. The animals have no harness, meaning that balance cannot be bought about by force, but rather freewill.

The sphinxes also represent an enigma or riddle which the charioteer must solve. Waite writes, “He has thus replied to the sphinx, and it is on this account … he is above all things triumph in the mind.”

The riddle he refers to a famous one from Greek mythology. The sphinx asked this riddle to all travellers, before letting them pass: What is the creature with one voice, but has four feet in the morning, two feet in the afternoon, and three feet at night? The answer is “man” who crawls on all fours as a baby, walks on two feet as an adult and needs a walking cane when old.

Landscape Symbolism in The Chariot Card

Castles symbolize home and success at the end of a long journey.

Behind the chariot, there are four pillars in the background. The number four refers to stability and order.

A Moat surrounds the city wall. In Tarot, moats symbolize two different states of awareness. There is this side, and that side of the water. On this side, you had a challenge, and on the other side your challenge is over.

⭐A moat also appears in:  Four of Wands Symbols

The Ultimate Guide to The Chariot Symbols 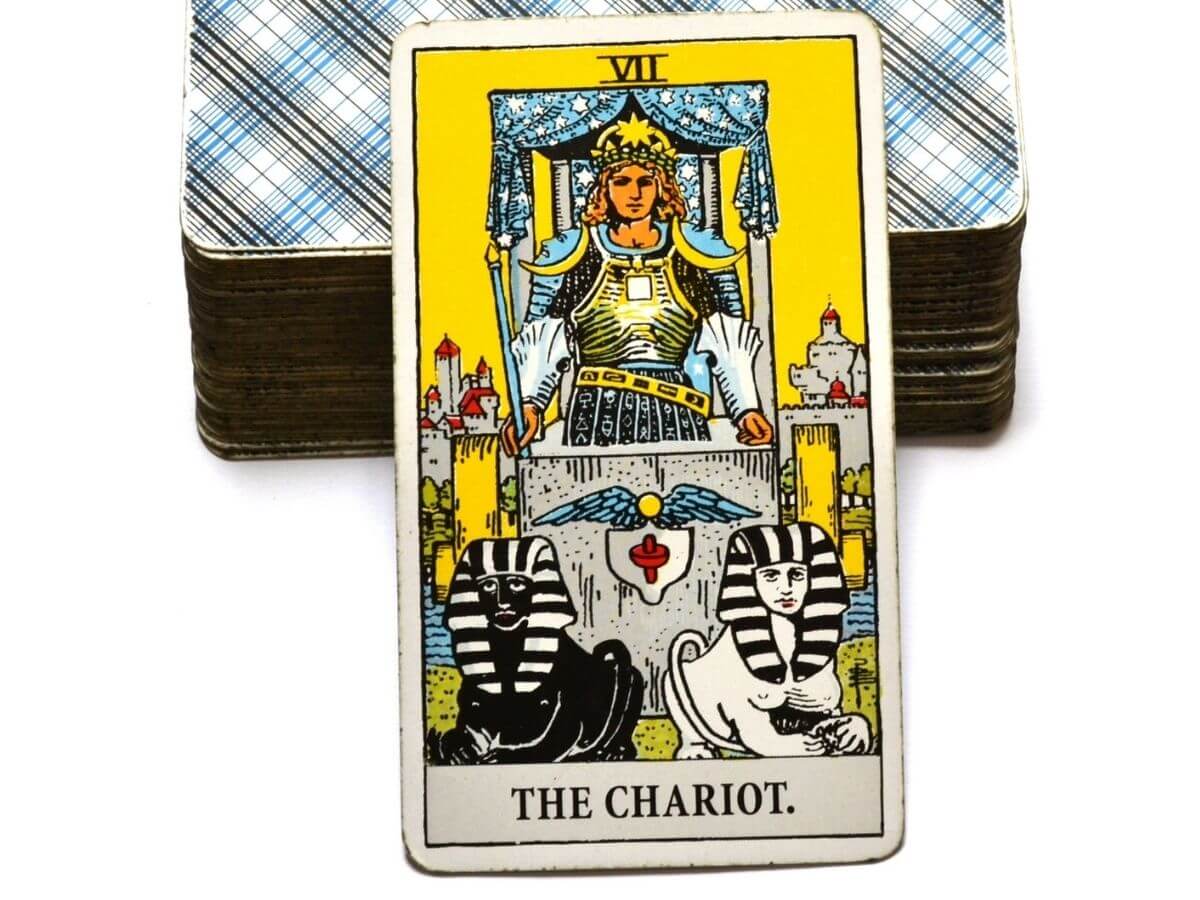