The symbolism found on this card is primarily drawn from mythology, alchemy and occultism.

“A man oppressed by the weight of the ten staves which is carrying.”

What is The Meaning of The Bent Over Man Carrying Wands?

A man staggers forward, bent and overburdened by the weight of 10 wands. The wands obstruct his view, but his grip is tight, suggesting that he is capable of holding on until he reaches his destination. The village nearby suggests that this should not be too long more.

The artist Pamela Colman Smith drew the idea of this card directly from the Ten of Swords of the 15th century Sola Busca Tarot. This deck’s symbology is closely related to alchemy as practiced during the Renaissance. Smith created her art two years after photographs of the Sola Busca deck were acquired by the British Museum, and most likely she saw the cards on display there.

In Tarot, the Ten cards are all about completion. In the Ten of Wands, the man is so focused on crossing the finish line, that he buries his head in his stack, unwilling to allow himself to be distracted. As such, the 10 of Wands becomes the ultimate card of grit, dedication and perseverance. This card represents the effort required to achieved a goal, and guides us to finish what we start.

The Tens in Tarot also represent a point of transition, of moving from one phase to the next. One suspects that the man in the 10 of Wands has not given too much thought to the future, or what he’ll do with those wands once he brings them home. Will he build something? Or will he sell the wands for firewood, perhaps?

The man will arrive home at the village exhausted, his energy expended. The symbology here, is running out of things that energy alone can achieve. The next phase will require a new input, perhaps the feelings of Cups, the practicalities of Pentacles or the thought of Swords.

In the next phase, he may very well end up applying this Zen proverb:

What Does The Castle Symbolize in The Ten of Wands?

In Tarot, castles symbolize dominion, which comes from the Latin domus, meaning home or destination. This may be a physical home where you live or grew up in.

Castles also symbolize success at the end of a long journey, such as a college course, search for a new home, or diet.

The castle with red roofs in this card is similar to the castle in the Four of Wands, just viewed from a different vantage point. This infers that the man did not rest on his laurels after the first flush of success, but kept going and achieved so much more.

What Do All The Trees Symbolize in The Ten of Wands?

Trees symbolize growth, and plans for the future in Tarot. If there are a lot of trees in a card, as in the 10 of Wands, this predicts many possibilities for the future, and much abundance.

If you notice, the wands the man is carrying are all sprouting leaves, indicating new potential. Once the man has arrived home and dropped his burden, it will be time to rest. Once he is recovered, he may decide to tap into the power of the Cups, Pentacles or Swords suites next, to nurture those leaves into trees.

This could be a person who has succeeded in business, and next takes up meditation to improve his intuition (Cups), or networking to be inspired by ideas (Swords), or study to improve his practical qualifications (Pentacles).

What Sphere Does The 10 of Wands Represent in Qabalah?

Qabalah (Kabbalah): In western occultism, the 10 of Wands depicts the tenth sphere or sefirot of the Tree of Life called Malkuth. This translates as Kingship or humility. All of the other sefirot flow into Malkuth and it is the final revelation of the Divine.

According to the Hermetic Order of the Golden Dawn, Adonai Melekh and Adonai ha-Arets are the Gods associated with Malkuth. Archangel Sandalphon resides over the sphere. The order of angels that reside in the sphere is the Ishim (Souls of Fire). In Christian angelology, these angels include Guardian Angels.

The Ultimate Guide to Ten of Wands Symbols 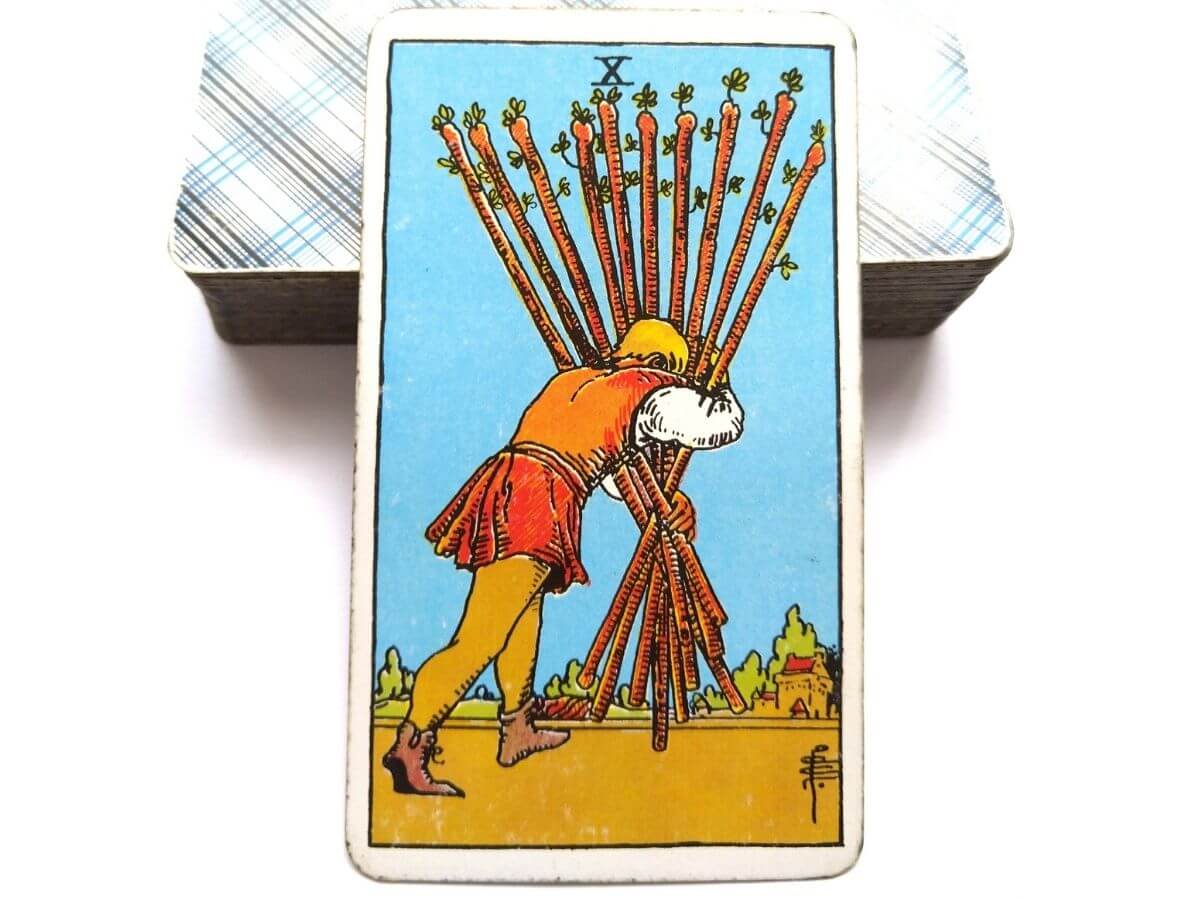