The symbolism found on Tarot this card is primarily drawn from mythology, metaphysics, Christianity, and western occultism.

“A prostrate figure, pierced by all the swords belonging to the card.”

Imagery of the 10 of Swords: Discover the symbol meanings, metaphors, legend and allegory

Why Has The Man Been Stabbed in The Ten of Swords?

A man lies on a beach face down in the sand, his red cloak pulled down around his waist. An ocean and mountain range in the background. Ten swords pierce his back. Blood streams from his head, signifying the loss of life force.

There is a sense of Shakespearean drama about this card, as though we are witnessing the final act in a play. This could be the legendary back-stabbing of the Emperor Julius Caesar by his friend Brutus and treacherous political senators.

According to the historian Gaius Suetonius, senators ripped Caesar’s red toga from his shoulder and plunged their daggers into his back, one after the other. Caeser shouted “Ista quidem vis est!” (Why, this is violence!) and collapsed with the first blow.

In his description of the 10 of Swords, A.E. Waite was very specific in his use of word “prostrate,” which means “to cast oneself down in submission or helplessness.” He wants us to know that the man gave little or no fight as he succumbed to his fate.

Waite also says the man is ‘pierced’ by swords. In Tarot, the swords suit represent the mind and intellect, and if 10 Swords have pierced your mind, then clarity is likely to result. There is nowhere left to hide from the truth, illusions have been penetrated and cut through.

The central message of this card, is to know when you are beaten, or know when it’s time to move on. There are similarities here to the Tower Tarot card, which can predict ruin of a practical nature, like the abrupt end of a job or a relationship. However, the Ten of Swords is more in the mental realm. You ‘feel’ finished, with a situation, person, habit or way of thinking. This card suggests the proverbial final straw, that broke the camel’s back.

Why Are The Swords Placed Along The Man’s Spine?

The ten swords seem to trace a line along the man’s spine. Most likely the artist, Pamela Colman-Smith, was alluding here to the ten main chakras of the human body, through which we receive energy healing and spiritual attainment.

The swords act as acupuncture needles, suggesting a systematic chakra cleansing, or renewal of mind, body and spirit is taking place. This is a metaphor for the end of one existence, and preparation for the next.

The 10 Chakras are as follows:

This chakra is outside of your body, a few inches above your head. It is associated with spiritual enlightenment, mediumship and astral travel.

This chakra is at the top of your head and is associated with self-realization and faith. It is usually where energy healing enters the body from the spiritual world.

This chakra is situated between the eyes and is associated with psychic insight, clairvoyance and premonitions.

4. Throat Chakra
Located in the lower throat area, this chakra is associated with speaking the truth.

5. Thymus Chakra
Located half way between the throat and heart chakra, this chakra is associated with forgiveness.

6. Heart Chakra
Situated in the heart area, an open heart chakra helps you to feel love and compassion.

7. Solar Plexus
This chakra is located half way between your heart and sacral chakra. It is your vital energy center, and when the solar plexus is spinning in a healthy manner, you feel energized.

8. Sacral
Situated in the belly-button area, this chakra is your emotional area, and affects your mood.

9. Base Chakra
Also known as kundalini, this chakra is at the base of your spine and controls your primal life force energy.

10. Earth Star Chakra
Located outside your body, a few inches below your feet, this is your ‘grounding’ chakra. It helps you feel connected to nature, and life force chi or prana energy.

What is The Symbolism of The Hand Gesture?

If you look closely, you will see that the man’s right hand appears to be giving the Christian sign of benediction or blessing; which is always offered with the right hand. Three fingers pointing towards heaven to symbolize the divine trinity.

Coincidentally, this slightly ‘clawed’ gesture is also a clinical sign of nerve damage in the spine or brain, a condition called hand of benediction, preachers hand or pointing finger.

The benediction gesture can also been seen in the Hierophant Tarot card, traditionally viewed as the Pope. The implied reference here, is one of forgiveness. Forgive those who have bought you to this state, as Christ bestowed forgiveness on those who wronged him. It also implies that in life and death we are blessed.

Palmistry Fact
In palmistry, the raised middle finger represents the planet Saturn and is understood to be the finger of authority.

Is The Man Dead or Still Alive in The Ten of Swords?

No, the man is still alive. We know this because the benediction position can only be made with active muscular control.

In his reversed divinatory meaning for this card, Waite suggests that “none of these [states] are permanent.”

The hand thus becomes a symbol of life, when all else signals defeat.

The Sea, Sky and Mountains as a Symbol. What is The Meaning of The Landscape?

The man seems to be lying on a sandy beach. There is a wide expanse of a sea, the water looks placid or even lifeless. Within a Tarot reading, the sea is a metaphor for ‘expansion’ and is meant to make us reflect on our life. In this case, what part of our life is over.

Black is the color of mourning and death. The dark sky contrasts to the vivid yellow of the golden dawn. Yellow is a symbol of alertness and mental energy. As the black slowly dissipates, a new dawn is emerging.

There is also likely to be a reference here to the secret society of the Hermetic Order of the Golden Dawn.

Mountains tend to represent ‘obstacles’ to overcome in Tarot. The closer the mountain, the more immediate the problem. In this card, the mountains lie on the other side of the sea, some way in the distance. They are obstacles for another day, another dawn.

What Sphere Does The Ten of Swords Represent in Qabalah?

According to Kabbalah, God (Ein Sof) made manifestations. Each manifestation is called a Sephirah (plural, Sephirot). Tens in Tarot connect to the tenth Sephirah, called Malkuth, the sphere of earthly reality.

According to the Hermetic Order of the Golden Dawn, Sandalphon is the archangel who resides over the sphere. The order of angels that reside in the sphere are the Asheem, or Souls of Fire.

The Ultimate Guide to Ten of Swords Symbols 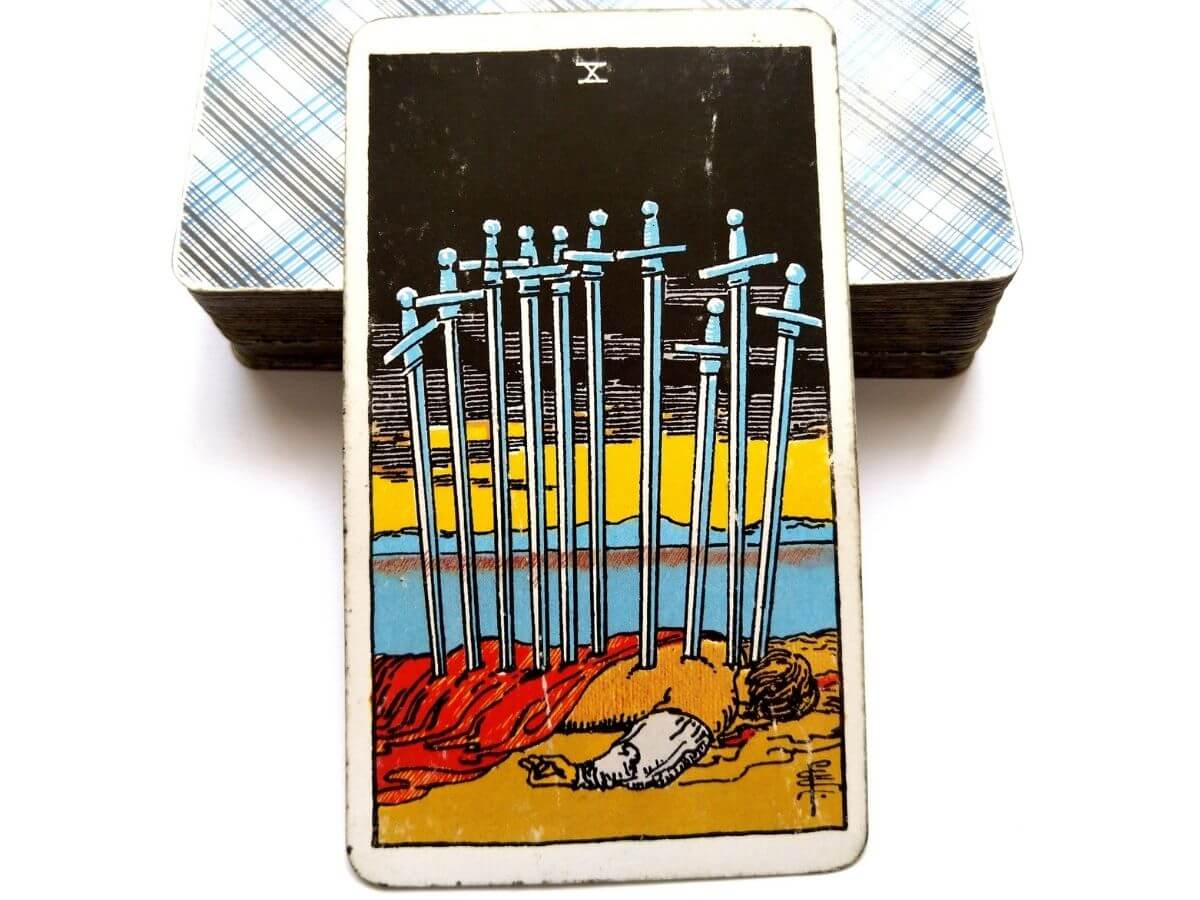