The symbolism found on this card is primarily drawn from mythology, alchemy, metaphysics and western occultism.

Who Is The Old Man in The Ten of Pentacles?

The Ten of Pentacles shows a couple gathered beneath an archway, a child and old man in a colorful robe who appears to be the grandfather watching over his relations. The old man or “ancient personage” as Waite describes him, is the dominant figure in this card. But who is he?

To understand this question, we must first understand the key meaning of the card itself, which is the culmination of all things in the material world. Thus, the old man becomes a symbol of the culmination of life, and of time and effort spent. He has achieved wealth, status and respect for the life he has built over many years, and not over weeks or months.

Is the Man Waite?

It is possible that the artist has depicted one of the co-founders of the The Hermetic Order of the Golden Dawn, either William Woodman or William Wynn Wescott, in this card. Or perhaps the figure is meant to be an older A.E. Waite. There appears to be a stylized letter W, with an A and E conflated into each other on the side of the man’s chair. There certainly seems to be similarities in the profile of the old man’s face, and Waite’s photo below.

As Waite commissioned the cards, it is of course very possible that he asked for his own likeness to be inserted in one of the cards, or the artist decided to do so herself.

If the old man is indeed Waite, or one of the Golden Dawn co-founders, this card becomes a homage to those initiates who pass through the grades of the Golden Dawn. Within the Golden Dawn, members progress through a system of grades and levels which correspond to the Sephiroth on the Qabalistic Tree of Life. At each level the student receives further access to secret teachings on magik, Qabalah, tarot, astrology, geomancy and alchemy.

The artist Pamela Colman-Smith met Waite after she joined the Isis-Urania Temple of the Golden Dawn in 1901. She never advanced beyond the first degree Zelator level, which led Waite to note in his autobiography Shadows of Life and Thought (1938) that Pamela had to be “spoon-fed carefully” over which symbols to include in the cards. The implication here, is that she wasn’t a serious student and her achievements were never likely to culminate in Ten of Pentacles status.

Ironically, however, despite Waite’s prolific writings on more serious subject matters such as the history of occult sciences, alchemy, devil-worship, black-magic and Freemasonry; the only publication which has endured the test of time, is his joint project with Pamela: The Rider Waite Tarot deck.

What is The Significance of the Ten Hanging Pentacles?

Notice the layout of the ten pentacles. They are hanging in the shape of the Qabalistic Tree of Life.

This is another reference to the advancement of learning through stages or grades. The tree represents a series of divine stages that the human soul most travel through in order to reach enlightenment.

What is The Symbolism of the Scales and Tower in The Ten of Pentacles?

Interesting symbology is carved into the stonework of the archway. This is a subtle reference to the Freemasons, who originally were stone-workers.

Just above the older man’s head, you can see a scales.

The scales link this card to Justice, and their presence suggests that this man has earned his situation in life. He did not inherit his fortune.

To the left of the old mans’ head, we see a tower carved into the archway. This tower is similar to the image in the Tower card. The tower is grainy, like an old and distant memory from the past. It represents the trials and tribulations of darker days, and the challenges he had to overcome in order to be sitting where he is today.

One does not feel that the younger couple and the child will have to go through the same pain-barriers, which is why this card is also associated with inherited wealth and social advantage.

Notice another castle depicted in the coat of arms on the archway. This castle is much grander and is pinned proudly to the wall. It represents the current status of all who reside here – wealthy and influential.

What is The Meaning of The Dogs in The Ten of Pentacles?

The old man and the young boy, both reach out to pet the two dogs.

Dogs are a symbol of loyalty, reliability and unconditional love. At the same time, they are devoted to family, both their own and ours.

Dogs are also a symbol of connection, here the old man and child, despite the disconnection of age and experience, are able to enjoy the same pleasure. This is a subtle reminder that all humanity, at a base-level have the same needs and wants.

On a metaphysical level, the dogs represent an axis mundi, or cosmic connection between God (the old man) and people (the child). Note that the old man and child are not in direct contact with each other, they are both touching the dog as a ‘medium’ of communication. This is in keeping with occult philosophy, that humans need some sort of trustworthy agent or go-between in order to communicate with Higher Powers. This may be a psychic, medium, shaman or mystic; or a tool of paranormal divination such as tarot cards or ouiji board.

What Sphere Does The Ten of Pentacles Represent in Qabalah?

According to Kabbalah, God (Ein Sof) made manifestations. Each manifestation is called a Sephirah (plural, Sephirot). Tens in Tarot connect to the tenth Sephirah, called Malkuth, the sphere of earthly reality.

According to the Hermetic Order of the Golden Dawn, Sandalphon is the archangel who resides over the sphere. The order of angels that reside in the sphere are the Asheem, or Souls of Fire.

The Ultimate Guide to Ten of Pentacles Symbols 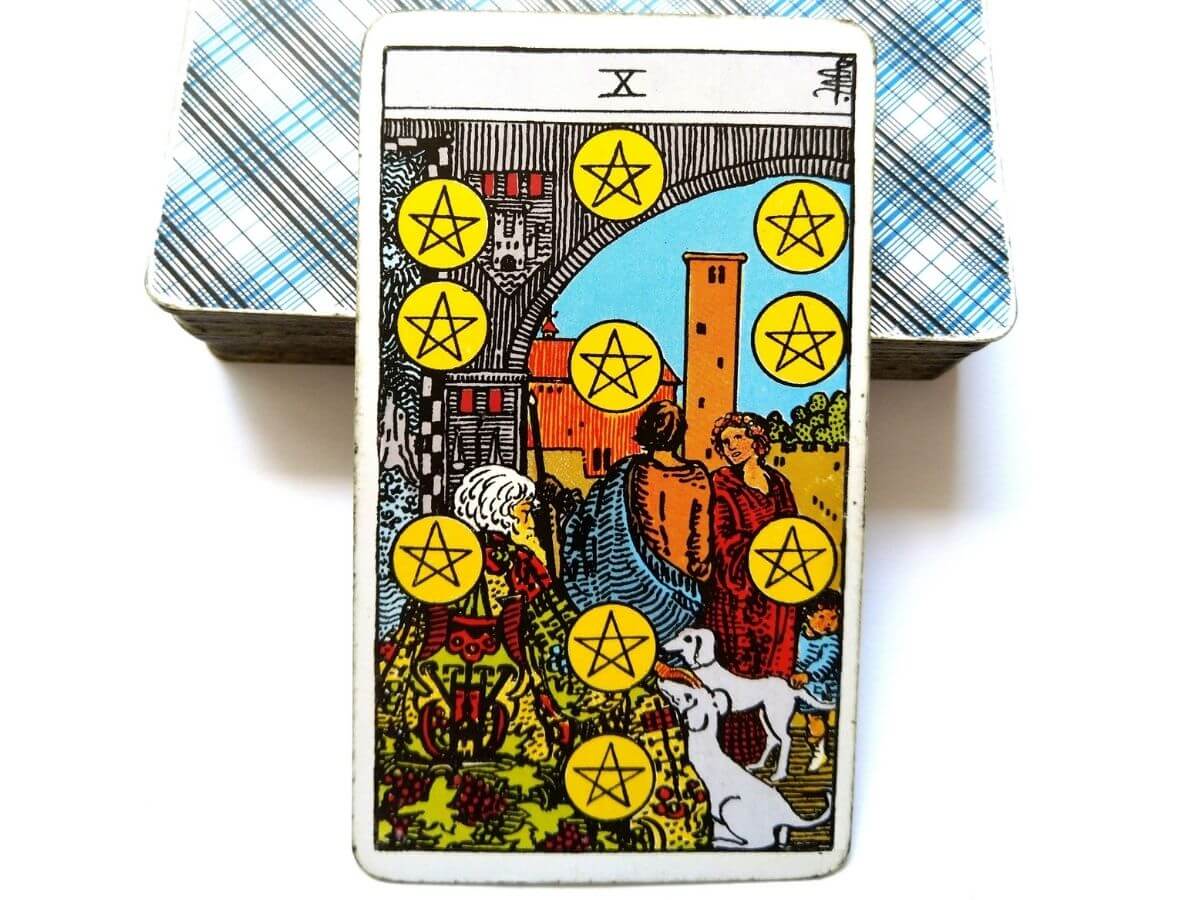