The symbolism found on this trump card is primarily drawn from mythology, alchemy, and western occultism.

The Rider Waite version of Temperance retains much of the iconography of older Tarot decks.

Historically, Temperance is represented as a winged angel, usually female, standing with one foot in water and one foot on land. She is pouring liquid from one jug to another, diluting wine with water, a standard allegory for temperance in European art.

According to Christian theology and classical philosophy, temperance was one of the four cardinal virtues required to live a virtuous life. The other virtues are: prudence, justice and fortitude.

Who is The Angel In The Temperance Card?

Arthur Waite describes the mystical androgynous figure in Temperance as a “winged angel”, who is neither “male nor female”.

Some Tarot authors claim it a Guardian Angel, while others argue it is the messenger angel Archangel Gabriel. Personally, I believe the golden disk on the angel’s forehead, identifies the figure as Archangel Michael, who ‘Like unto God’ as the Bible says, is the angel of Light, associated with the sun and element fire.

The angel has red wings, the color often attributed to Michael.

On the angel’s forehead is a round golden circle with a dot. Waite writes, it is “the sign of the sun”. The dot in the middle of the circle is the alchemist’s symbol for gold.

The angel’s head glows with a nimbus, or halo. Christian iconography uses the halo, a glowing sphere around the crown chakra, to signify saints and holy people and spiritual beings.

The angel wears a white robe. White is a symbol of Spirit, purity and wisdom. At the neck, the Hebrew characters for God, called the Tetragrammaton, is written:

The symbolism of enclosing the triangle, within the square, is to show that the angel is attempting to ignite the viewer’s spiritual life through the natural elements of alchemy.

What is The Symbolism of The Angel Mixing Water in The Cups?

Temperance is traditionally depicted as a woman pouring sacred fluid from one cup to another. The liquid seems to spring from some inexhaustible source. This source is life-force, also known as chi, prana or vital energy. We are reminded thus, that there is no need to be greedy or to try and rush things, there will always be enough to go around.

The two vessels can also be taken to represent the conscious and unconscious. When this card turns up in a Tarot reading, it means that the angelic realm is helping the sitter to reconcile these part of themselves. To help them understand the ‘bigger picture’ and why things are happening in their life, the way they are.

The blue water symbolizes the cosmic mind, also called ‘The Universe’, and all that which it is composed.

The angel rests one foot on earth and the other in the water. This symbolizes that the angel is equally at home in the conscious (earth, material world) and the subconscious (water).

What is The Symbolism of The Landscape in Temperance?

The blue pond or water pool represents the subconscious mind. It corresponds to the ninth sephirah, Yesod, in the kabbalistic Tree of Life. Yesod is the foundation upon which God has built the world, and it serves as a transmitter between the sephirot above, and the reality below. In essence, it facilitates or lubricates the movement from one condition to another. From lower conscious to higher conscious, and from the body to the mind and spirit.

A path leads away from the pool, upwards towards a pair of mountain peaks. The path represents the route for the Fool to follow. At the end, just beyond the mountains, lies mastery and attainment.

The twin mountain peaks symbolize spiritual attainment, the point beyond which, lies a new level of skill and consciousness.

Waite describes what looks like a sun at the end of the path as a “great light, through which a crown is seen vaguely.” He continues, “Hereof is some part of the Secret of Eternal Life, as it is possible to man in his incarnation.”

This path does not lead us to the after-life. However, it will reveal some cosmic truths, as much as we can understand at least, while still incarnated in our human body. To be so blessed with this knowledge, is to be crowned for our efforts.

Two irises flower at the bank of the river, repeating the symbolism of the conscious and subconscious. The iris is a symbol of the Greek goddess Iris, who according to mythology, delivered messages to and from the gods. In ancient art, she is depicted carrying a pitcher of water.

The Ultimate Guide to Temperance Symbols 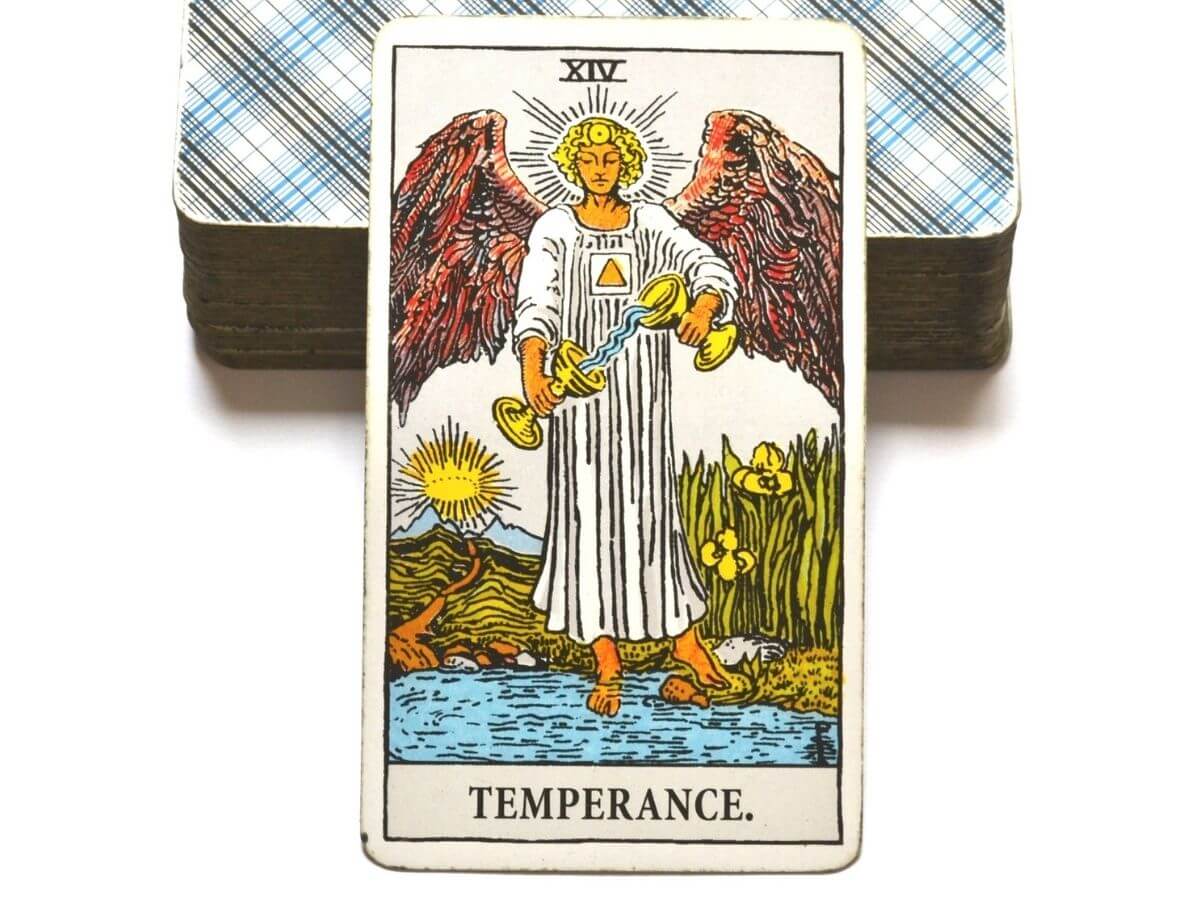