Tarot suits refer to the four categories of cards in the Minor Arcana of Tarot.

What Are The Tarot Suits and What do They Represent?

There are four suits in the Minor Arcana of Tarot. In the Rider-Waite deck, which is the most popular deck in the world, these are called the Suit of Wands, Suit of Cups, Suit of Swords and Suit of Pentacles.

Each suits contains 14 cards, Ace, one, two, three, four, five, six, seven, eight, nine, ten, Page, Knight, Queen and King. The structure of the suits is similar to ordinary playing cards, clubs, hearts, spades and diamonds; except for an additional court card in the Tarot.

There are three kinds of cards in each Tarot suit. These are:

What Are Pip Cards in Tarot?

Pip cards are simply another name for the Minor Arcana cards in a Tarot deck. You can refer to the cards in the minor arcana as pips or minor cards.

Technically, Pips are small and countable items. In this instance the ‘countable’ refers to the suit of the card and its number. The term Pips is generally used more to refer to playing cards, than Tarot cards.

How do The Suits Determine Timing in Tarot?

Each suit in Tarot is associated with timing in a Tarot reading.

Swords represent days, Wands are weeks, Cups are months and Pentacles are years. If one of these cards falls in a timing position of a spread, it can help predict when the event you ask about will take place. For example, the Two of Wands can mean up to two weeks, and the Ace of Pentacles means one year.

Some cartomancers (people who use cards for divination), also use ordinary playing cards to predict the future and seek guidance. Here is how Tarot and playing card suit meanings correspond, for example the Ace of Diamonds corresponds to the Ace of Pentacles:

Wands, also called staves, staffs and batons, are associated with the Element Fire and the zodiac signs Aries, Leo and Sagittarius.

Wands are represented in the Rider-Waite deck as cut branches with green leaves sprouting from them, indicating new life. They represent growth, creativity, virility, self-development, enterprise, passion, desire and enlightenment.

Wands are future orientated, entrepreneurial and inventive. They initiate action. They light up dark spaces and get things moving. When you get predominately wands in a reading, ask yourself, what do I desire? How can I creatively express my ideas? What options for myself or business growth are present?

Cups, also called chalices and goblets are associated with the Element Water and the zodiac signs Pisces, Cancer and Scorpio.

The Cups are seen as full or empty goblets in the Rider-Waite deck. They represent emotions, relationships, the subconscious dream and astral world, psychic and intuitive arts, illusion, fertility, fantasy, peacefulness and grace.

Cups are pleasure loving and sociable. When you get predominately cups in a reading, ask yourself with what or who do I love? What am I dreaming about? Do I want to develop my psychic awareness? How am I feeling and how am I responding to that feeling?

The Cups take us on an emotional journey – its starts with the Ace of cups predicting a new love, and continues through the dating process (Two of Cups), dancing (Three of Cups) and heartache (Five of Cups). As we get older an old love from the past can return (Six of Cups) and we eventually end up happily ever after (Ten of Cups).

Cups also tend to be the cards of karma, and karmic dues.

Swords, also called blades, are associated with the Element Air and the zodiac signs Aquarius, Gemini and Libra.

Notice in the Rider-Waite deck that the clouds and sky are often indicative of the atmosphere of the card. For example, in the five of swords, the sky is disturbed and electric, indicating turmoil.

Swords represent your mental, rational and logical functions, as well as communication and thought. They indicate struggle and conflict and a need for action, to make decisions and to separate from past attachments. A need for truth is also often required. But swords can cut both ways – they can be used for constructive or destructive purposes. They symbolize what we do to each other when we are scared or feeling threatened.

In most circumstances we can choose how we wield the sword. When you get predominately swords in a reading, ask yourself, where are my thoughts focused? What decisions am I facing? What tension or conflict needs resolving? What changes need to be made? Swords represent mind over matter – and it is important that you can use this energy to resolve difficult situations.

Pentacles, also called coins and discs and disks in older decks, are associated with the Element Earth and the zodiac signs Capricorn, Taurus and Virgo.

This suit indicates a concern with money, the result of labor, the gathering of knowledge and development of skills.

Pentacles are about how you earn your money, whether it is time to play things safe or take a gamble and how your efforts will pay off over time. They represent what stabilizes and grounds you, as well as traditions and inheritances. Since they question your self-worth and what you value, pentacles can represent money, work or your home, depending on where your sense of security lies.

The Waite deck depicts Pentacles within a capitalist framework and often shows the disparity between the have and the have-nots. When you get predominantly Pentacles in a reading, asks yourself what do I value? Where do I find my greatest sense of security? What do I feel insecure about? What goals are coming to fruition? Does the future look financially bright or do I need to reign in my spending? Pentacles are concerned with hard work and the rewards that usually come with it.

Tarot Suits in a cartomantic deck 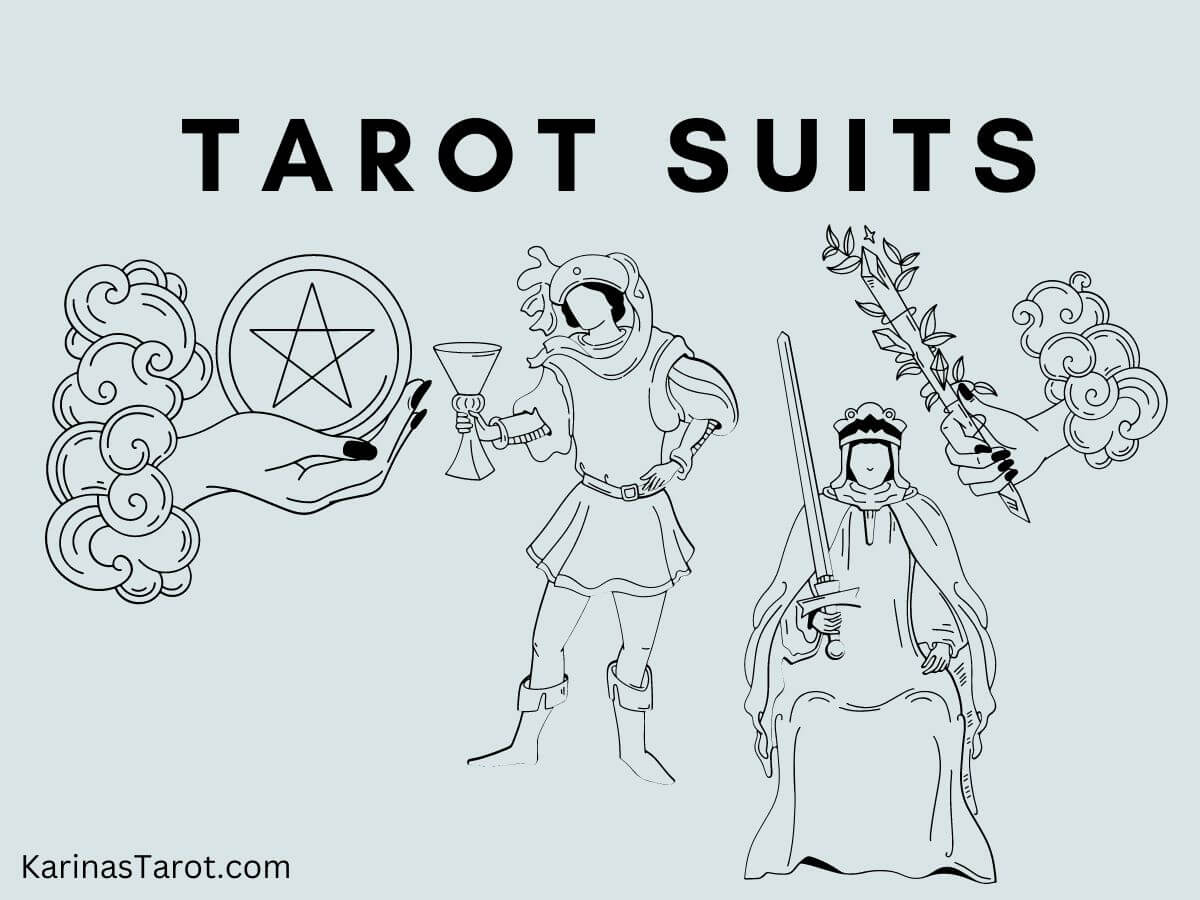