In this article Tarot Card Symbols, we will discuss the symbols depicted in the Rider Waite Tarot deck.

Glance through the Major Arcana and you will quickly discover symbols drawn from astrology, alchemy, mythology and religious text.

The more you study the Rider Waite, the more you will discover. Few Tarot deck creators were as esoterically well-informed as Arthur Waite as to the multidimensional aspects of symbols. As an influential member of the Hermetic Order of the Golden Dawn, he was versed in a wide range of occult sciences, including cartomancy, shamanism, Jewish mysticism and Kabbalah, divination and scrying and Enochian ceremonial magic.

Why Are Symbols Important in Tarot?

The symbols and imagery used in the Rider Waite deck were influenced by the 19th-century magician and occultist Eliphas Levi, as well as by the teachings of the Golden Dawn.

When you study the symbols in these Tarot cards, you are learning the inner meaning of the cards, and by that, I refer to the occult, mystical and hidden meaning, as opposed to the ordinary divination or fortune telling meaning.

As Eliphas Levi wrote, “an imprisoned person, with no other book than the Tarot, if he knew how to use it could in a few years acquire universal knowledge.”

Understanding the inner meaning, will help you connect with the universal source of knowledge, sometimes called the Akashic Records or universal conscious.

The teachings of the Tarot are, essentially teachings about Godliness, and about how we can manifest God and His power in our lives. Each symbol in a card contains advice, at some level, on how to either handle change, embrace change or drive change.

What Are The Most Popular Symbols in Tarot?

In the Rider Waite deck, you will notice that certain symbols appear more frequently, and therefore deserve special attention. Those symbols include:

Bird: Message from the spirit world, also symbol of the soul
Blood: Sacrifice
Bridge: Symbolizes a way forward, from one state to another, like an ascension process
Blindfold: Turning a blind eye

Devil: Subconscious desires, and materialism
Desert: Clarity of thought, a landscape void of distraction
Dog: Faithful companion, messengers of spirit
Dolphin: The need for playtime, take a break
Door: New opportunity, barrier through which only initiates in the Golden Dawn or Masons may unlock
Dove: Peace, holy spirit

Eye of Horus: Symbol of the watchful Egyptian lord of the skies

Garden: Cultivation of the human soul
Globe: The world is your oyster, expansion
Glove: Protection
Goat: Symbol of the astrological sign Capricorn
Grapes: Abundance and celebration

Halo: Glowing sphere around the head chakra, to signify saints, holy people and enlightenment
Hammer: In the Freemasons, the Hammer symbolizes willpower and a person’s willingness to obtain
Hexagram: 6-pointed star; combination of material and spiritual
Horse: Symbol of forward momentum

Nimbus: A halo or aura, sign of spiritual enlightenment

Ocean: Reflects emotions and how you feel at the time of a Tarot reading

Queen: Expression of the highest feminine qualities of the Tarot suit

Here is a list of all 22 cards in the Major Arcana, and their symbolism: 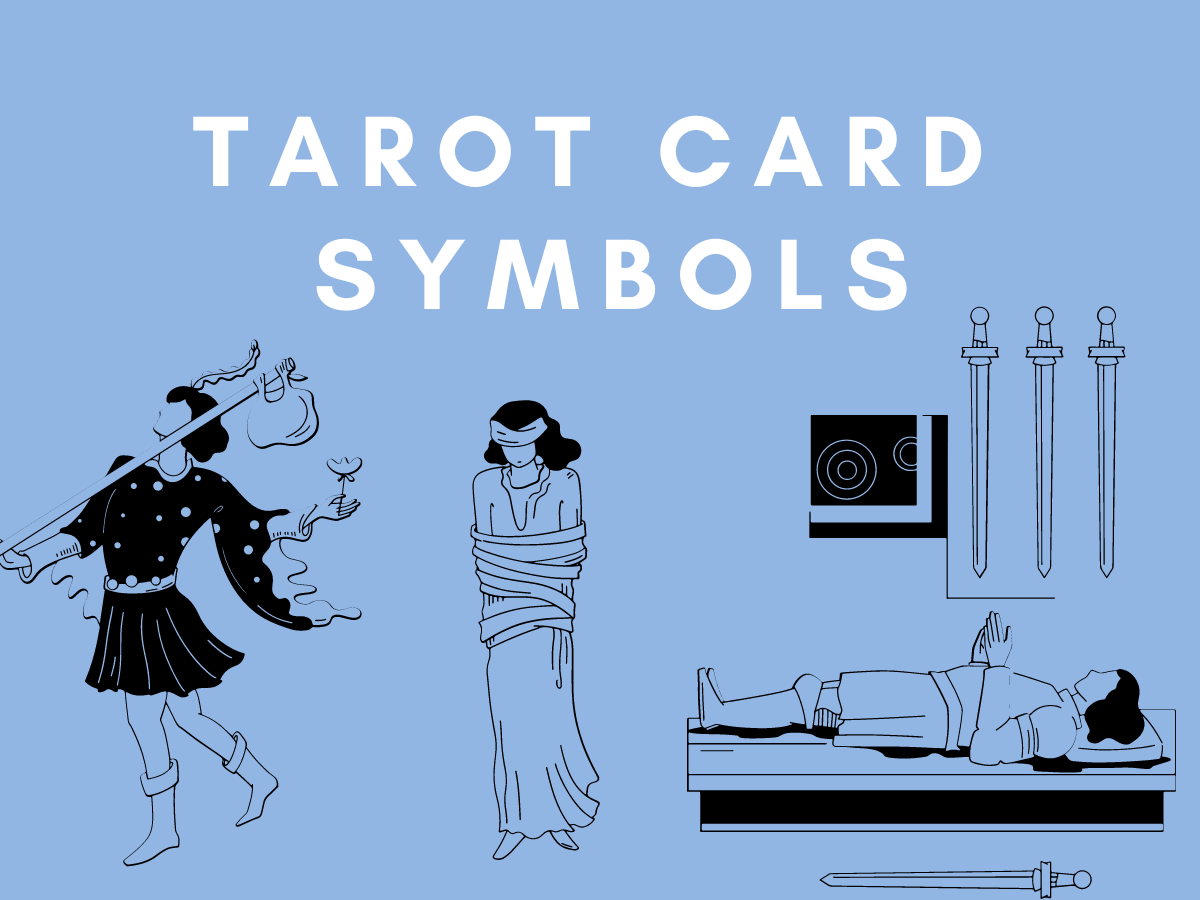