What is The Meaning of The Suit of Wands?

There are four Tarot suits in a deck of Tarot cards, of which one is the Suit of Wands. The suits form the Minor Arcana, also known as the pip cards in Tarot. Wands are associated with the classical element Fire, and represent action, energy, determination and ambition.

Wand cards show us what we want and why we want it. The energy of the Suit of Wands in divination is masculine and explosive.

Wands represent the power of manifestation, which is why they turn up in Major Arcana cards too, like the Magician, Chariot and The World. You are guided to take hold of your wand and start manifesting!

Wands can be depicted as clubs, batons, staves, fire, rods, torches and sticks. Wands are associated with Clubs, in traditional playing cards. Like the other tarot suits, the Wands Suit contains 14 cards: Ace (1), 2 through to 10, Page, Knight, Queen and King.

What Does It Mean When Your Tarot Reading Is Mostly Swords Cards?

When Wands cards dominate your Tarot reading, it means you should focus on turning possibilities into reality. When you experience lots of Wands in a Tarot spread, the Universe is calling you to step up to the plate and act. Whatever is on your mind at the time of the reading, heed the call – this may be to start a business, apply for a new job, learn something new or push ahead with a passion project.

When there are NO Wand cards in your reading, it can sometimes indicate stagnation, laziness or fear holding you back.

All cards within the Suit of Wands are associated with the element Fire. In astrology, they correspond to the Fire star signs Aries, Leo and Sagittarius.

In Kabala, the Wands Tarot Suit corresponds to Atziluth (the Archetypal World). This is the world of possibilities and attached to the idea of creation.

Two of Wands
What you have started begins to deliver results.
Two of Wands Symbols: Castle, globe, flowers, sea, forest and mountains.

Three of Wands
You are experiencing some success and can now expand your horizons further.
Three of Wands Symbols: Chalice, Caduceus of Hermes, snakes, wings, Yin and Yang.

Four of Wands
There is cause for celebration or a happy gathering of friends and family.
Four of Wands Symbols: Archway, flowers, grapevine, castle, moat, bridge and yellow sky.

Five of Wands
Fight for what you want, don’t be afraid to compete.
Five of Wands Symbols: Battle, blue sky and barren landscape.

Seven of Wands
Do not give up, and stand your ground if necessary.
Seven of Wands Symbols: Attackers, mismatched shoes, green tunic, mountain summit.

Eight of Wands
Life speed up and there is rapid progress now.
Eight of Wands Symbols: Why are there no people in this card? Plus meaning of hills, river and castle.

Ten of Wands
Feeling exhausted and overburdened by responsibilities.
Ten of Wands Symbols: Why is the man bent over? Symbolism of the trees and castle. 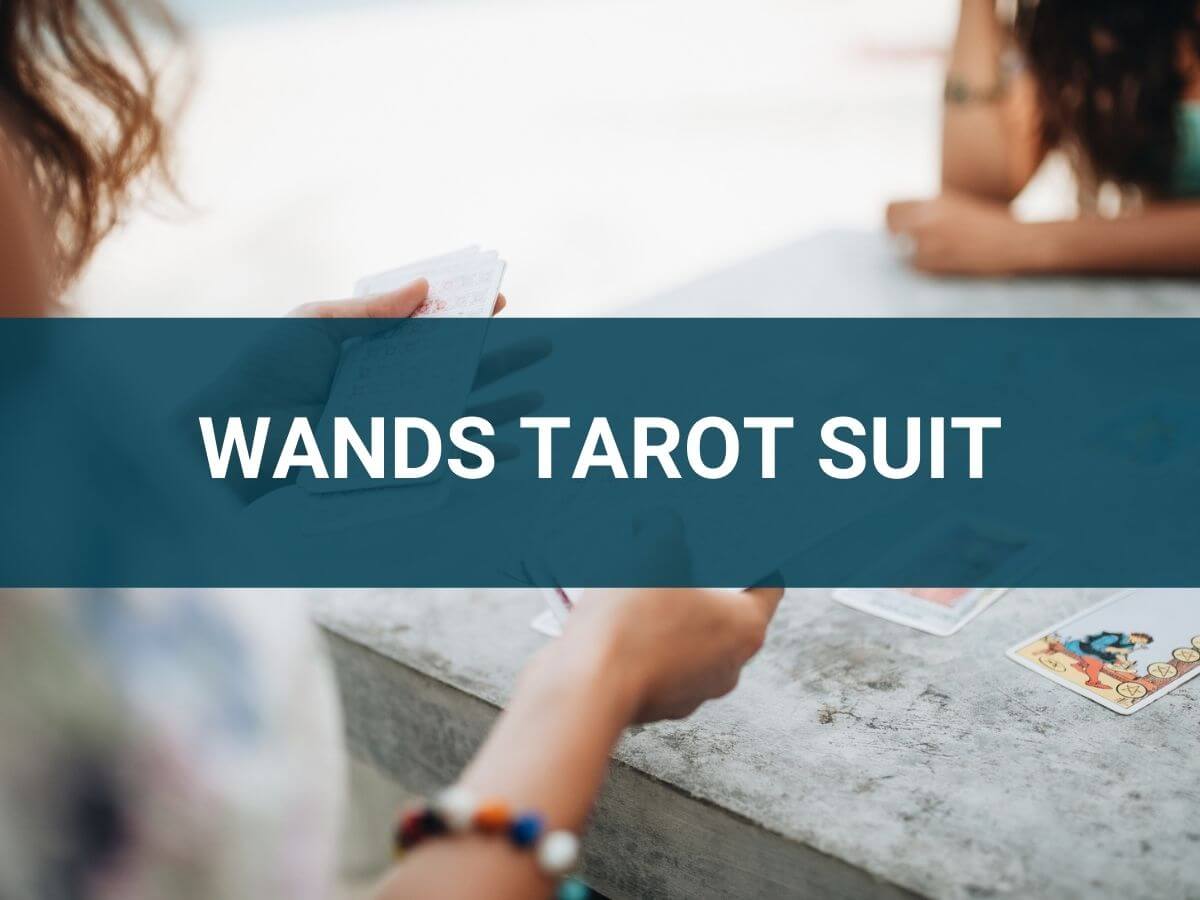