The symbolism found on this trump card is primarily drawn from mythology, astrology, metaphysics and western occultism.

We can see that the Rider Waite version of this card remains true to earlier historical iconographic depictions. Traditionally, a female in flowing garments uses gentle force to close the mouth of a lion. Notice however, in the Marseille Tarot, that the woman’s hat forms an infinity symbol. The author, A.E. Waite replaced the hat with a hovering figure eight, and amended the Magician in the same way.

Waite writes that the only way in which his “design differs from the conventional presentations is that her beneficent fortitude has already subdued the lion, which is being led by a chain of flowers.” In other words, his lion is less feisty and has already been tamed.

This small, but significant variation, shifts the meaning of the card from the struggle to find strength, to the maintenance of strength.

Mathers based his attributions on information gleamed from ancient texts, called the Cipher Manuscripts. These 60 scripts outline a series of magical rituals corresponding to the elements Earth, Air, Water and Fire. In fact, the occult material in these documents, essentially formed the basis for Western occultism in the 19th century.

Who is The Woman in The Strength Card?

A golden haired woman gently closes the mouth of a lion. Her dominion over the lion is through spiritual powers rather than brute force. She is using her psychic abilities to connect with and reassure the animal.

She could be Cyrene, handmaiden to the Moon goddess Artemis. See how her body forms the shape of a crescent moon, as she bends down towards the lion?

Greek mythology tells of Apollo the Sun god, who encounters Cyrene struggling with a fierce lion. Cyrene won her fight, and Apollo was so charmed by her courage, fortitude and beauty, that he whisked her off to paradise.

She wears a belt made with flowers, which Waite writes acts as a chain for the lion. This is no iron chain, and another reference to how little actual force is needed to tame the lion.

The belt appears to consist of roses. Red roses represent desire in a Tarot reading, but these roses have been tamed and cultivated into a garland.

The woman wears a rose wreath in her hair. The wreath has four roses, which represent the Four Worlds, or spiritual realms in Kabbalah. Notice flower buds sprouting from the wreath up towards the Light. These represent the seeds or ideas of Divine inspiration.

We are reminded that spiritual enlightenment cannot come from spiritual ideas alone, we must also be prepared to do as we preach.

The simple white dress implies purity of thought and action.

The woman’s yellow hair connects her both to the Fool and Empress. In all instances, yellow hair symbolized radiant solar energy and the Life-Breath. I refer here to the metaphysical meaning of breath: being inspired by high ideas. The breath of life is the silent flow of God and spirit through the body.

“There is a spirit in man, And the breath of the Almighty giveth them understanding”
(Job 32:8).

What is The Meaning of The Infinity Symbol in The Strength Card?

The horizontal figure 8 symbol above the woman’s head is the lemniscate or sign of infinity. It means, what goes around, comes around. We are born and reborn again. The placement of the infinity sign above the woman’s head, signifies she is consciously aware that her actions have consequences, if not in this life, then in the next.

This is the same lemniscate which occurs over the head of the Magician, inferring that some of his magic powers have been transferred to the woman.

What is The Symbolism of The Lion in The Strength Card?

The lion is the astrological symbol of Leo, the zodiac sign assigned by the Golden Dawn to this card. We even see the pattern of the curved Leo glyph inside the curl of the lion’s mane.

The red lion is a symbol of the primitive forces in nature, including within ourselves. Red is associated with sexual prowess and muscular power. Interestingly, the Golden Dawn attributed the Hebrew letter Teth to this card. Teth means serpent, which connects to sensual kundalini energy, which is believed by some, to lie curled at the base chakra waiting for release.

In Christianity iconography, the lion has been used as a symbol to represent Christ, sometimes referred to as the Lion of Judah.

What Is The Symbolism of The Background?

The ground is green, but liquifying in parts into blue. We are not quite standing on solid ground here, it could be Heaven or Earth. Deep curvy black lines create a fluid-effect. Such black lines are a typical sign of the occult.

The blue mountain is a symbol of cosmic or universal memory. It can also be understood to be the Akashic Records, a place where one can astral travel to, in order to research past lives and other states of being.

The Ultimate Guide to Strength Symbols 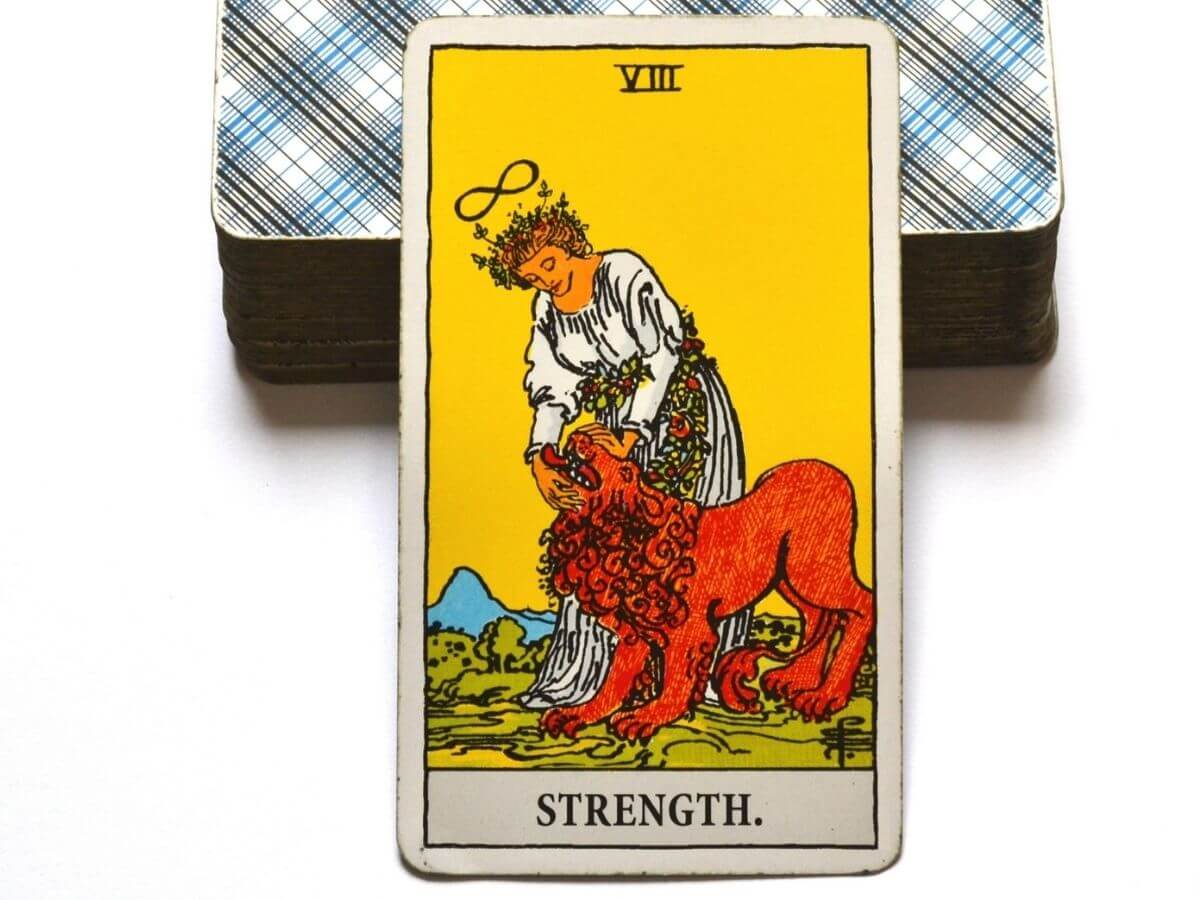