The symbolism found on this card is primarily drawn from mythology, metaphysics and astrology.

“A laurelled horseman bears one staff adorned with a laurel crown; footmen with staves are at his side.”

What Does The Horseman Symbolize in The Six of Wands?

A horseman adorned with a laurel crown and holding a staff, rides through the town. After the messiness of the Five of Wands, the scattered energy is now organized and a leader has emerged. We are witnessing a triumphant victory parade.

The use of colorful pageantry here is significant. We feel that the victor wants to ‘show off’ his success or is finally comfortable displaying his true colors. This a graduation or validation, the culmination of past efforts, before resuming his journey. The victory here is a minor arcana version of the Chariot Tarot card, but lacks the permanence or spiritual attainment of the major arcana. The conquest or victory of the Six of Wands brings temporary praise and self-esteem, but at this very moment, that’s enough to feel totally amazing!

Some view this card as a resting point, taking a moment to stop and taste the benefits of success. However, it can also be seen as reaching a high point in your career or life, a point which feels ecstatic but which is very hard to sustain.

What is The Meaning of The Horse in The Six of Wands?

In Tarot, horses are a symbol of forward momentum, of the querant’s desire for ‘movement’. The arrival of a Knight or horseman is symbolic of transformation.

The message here is that you achieve your goals when you believe in yourself.

Horses are also regarded as a spiritual sign and encourage you to access other dimensions through shamanic journeying or meditation. You are encouraged now to deepen your spiritual practice.

⭐Horses appear in: The Chariot Symbols, Death Symbols, Sun Symbols and all Knights.

What is The Symbolism of the Gauntlet Gloves?

The horseman is wearing gauntlet gloves, which were worn traditionally to protect the hand and wrists of a combatant. Perhaps the artist Pamela Colman Smith intended the glove to represent a ‘thicker skin’, meaning our rider has become tougher for facing adversity.

The glove may also be a reference to ‘throwing down the gauntlet’. In times gone by, a Knight would issue a challenge to someone by throwing down their glove. The symbolism here, is that our horseman is ever ready for a new challenge.

What is The Symbolic Meaning of The Laurel Wreaths?

A laurel is a plant that was traditionally used to weave wreaths into a crown, which were given to the victors at sporting events in Ancient Greece and Rome. Today, the laurel is synonymous with achievement, and a laureate is someone who receives honor or recognition for achievement in the arts or science.

The victory laurel in the Six of Wands symbolizes the querant has just achieved something. This could be anything from getting the job you want to passing exams, or losing weight.

It may also signify fame and public recognition. The rulers of Greece and Rome wore a laurel on their head to signify their rank, status and importance. If you see a portrait of Julius Caesar, chances are he is wearing a laurel.

Meaning of the Ribbon

Important: The victory wreath tied to the staff our rider is holding, is fastened loosely with a red ribbon. Ribbons draw our attention to how fragile the binding is, and thus signal how fragile or fleeting this victory may be.

What Sphere Does The Six of Wands Represent in Qabalah?

Qabalah (Kabbalah): In western occultism, the 6 of Wands depicts the sixth sphere or sefirot of the Tree of Life called Tipareth or Tiferet.

The Ultimate Guide to Six of Wands Symbols 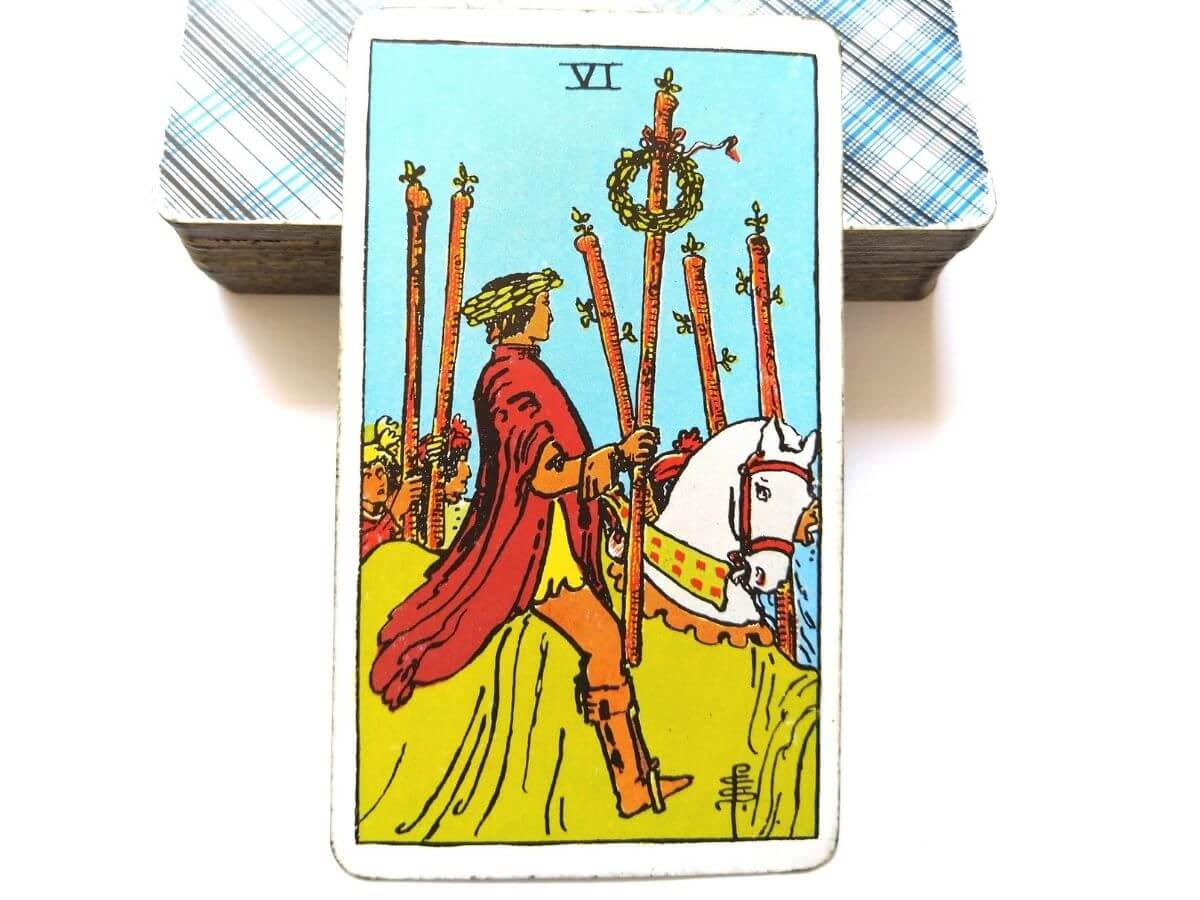