The symbolism found on this card is primarily drawn from metaphysics, Christianity, philosophy and western occultism.

Symbolism of The Merchant in The Six of Pentacles

A merchant stands with scales in hand, giving alms to two kneeling beggars. He wears a red robe, a symbol of power and prestige. This could be the merchant from the 3 of Wands who has now progressed, that he is able to share his wealth.

He holds a scale in his left hand, over the head of one of the beggars. This is the same scales we see in the Justice Tarot card, indicating the act of a measured response, or conditional generosity. He is not giving all that he can afford, he is doing enough to help the beggars, help themselves.

Four coins fall from the merchant’s hand. The number four in numerology, and Tarot represents stability. He is offering enough to ‘stabilize’ the situation.

As he drops the coins, the merchant’s hand makes the sign of benediction, a sign which is always offered with the right hand. The benediction gesture can also been seen in the Hierophant Tarot card and in the Ten of Swords. The implication here, is of blessings from Heaven.

The castle in the background, we assume, is the merchants home. The message is, that occasionally we must escape the comfortable life, in order to understand the lives of those who are less fortunate.

Symbolism of The Beggars in The Six of Pentacles

The beggar wears a yellow cloak, and extends out both hands, a display of great need and gratitude. In some cultures, such as Korea, it is traditional to receive gifts with both hands as a mark of respect.

Notice how the beggar’s face is set in religious ecstasy? A sort of trance-like state characterized by spiritual awareness. The bandage on his head, draws our attention to his crown chakra. This energy center is located at the top of the head and is associated with self-realization and faith. It is usually where energy healing and enlightenment enters the body from the spiritual world.

The second beggar in the blue cloak only extends out one hand, implying less need. The merchant holds the scales over his head, symbolizing he is more wary of giving him alms. Notice the red ticket or slip of paper peeping out from the pocket in the beggar’s cloak. It appears to be the same size as a theater ticket from the 1900’s. One feels that the man could suddenly cast off his cloak, to reveal that he is not a beggar at all, but perhaps an actor. Or maybe he is just a freeloader, the sort of person who makes a claim when they don’t really need it.

Everything is not as it seems, with this Tarot card. Even the donor has the “guise” of a merchant, according to Waite. Is the donor hiding something from the beggars?

This is a good time to use your sixth sense and intuition to understand the true nature of the people you are dealing with.

What Sphere Does The Six of Pentacles Represent in Qabalah?

According to Kabbalah, God (Ein Sof) made manifestations. Each manifestation is called a Sephirah (plural, Sephirot). Sixes in Tarot connect to the sixth Sephirah, called Tiphareth, translated as beauty.

The Ultimate Guide to Six of Pentacles Symbols 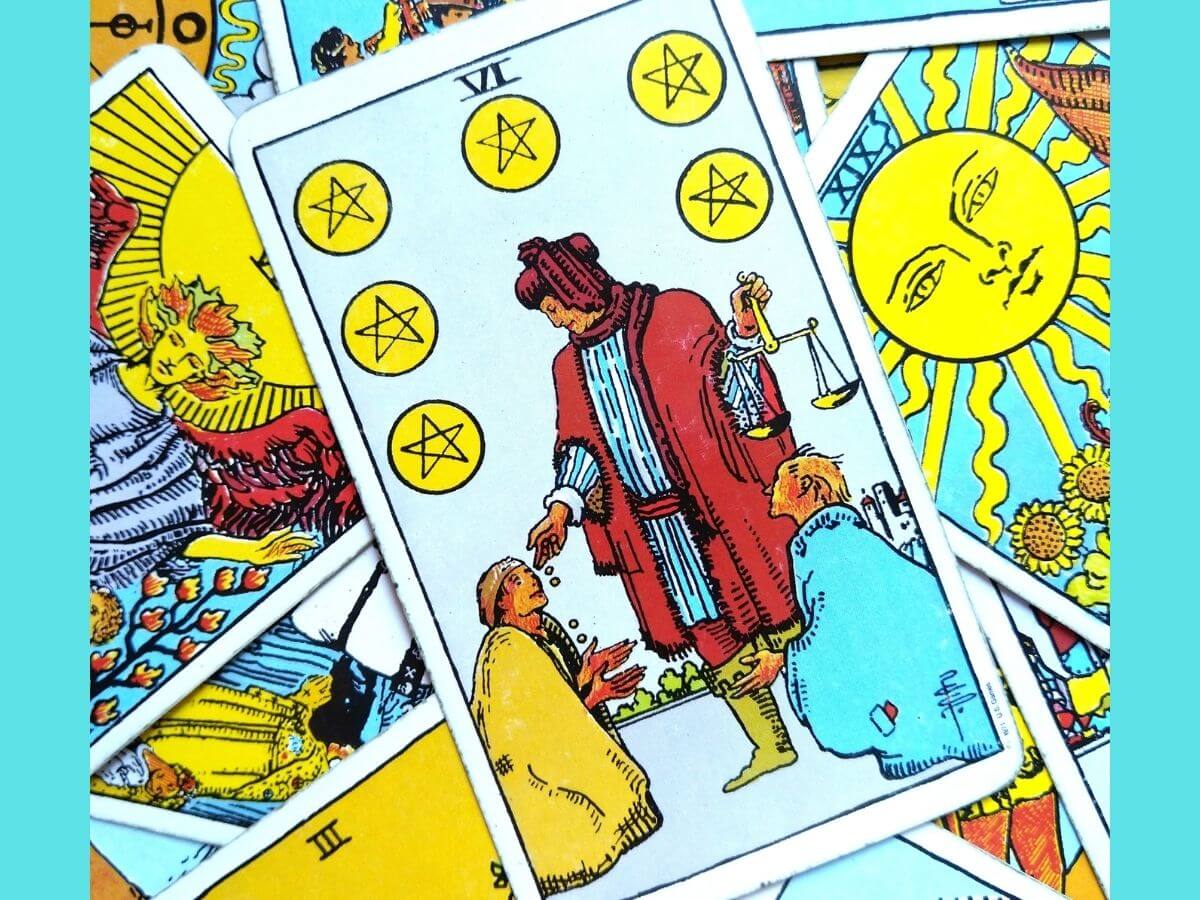