The symbolism found on this card is primarily drawn from mythology, metaphysics, western occultism and the history of swordsmanship.

“A man in the act of carrying away five swords rapidly; the two others of the card remain stuck in the ground. A camp is close at hand.”

Is He a Thief or a Hero in The Seven of Swords?

A man has entered a crusader encampment by stealth and is making off with five enemy swords. A group of guards (bottom left of card) are unaware of his actions.

The artist Pamela Colman-Smith drew inspiration for this card from the 15th century Sola-Busca Tarot.

The big question here: is the thief a ‘goody’ or ‘baddy’ in this Tarot card?

This conclusion is left up to the reader, whether you want him to get away with the theft or not, will depend on where your loyalties lie. He could be the hero or the thief depending on your perspective or question. If this card turns up in a spread in a Tarot reading, you must always make a fresh judgement at the time. In one reading he could be the thief, and in the next, the hero.

Sometimes the Seven of Wands indicates deception or trickery, and other times it indicates clever thinking and circumventing rules and authority. After all, would anyone think it immoral to steal guns from the Nazis?

What is The Meaning of The Red Fez Hat?

The man wears a red fez hat. The fez, also called tarboosh, is a felt, usually red, cylindrical shaped headdress which originated in Persia. The name ‘fez’ refers to the Moroccan city of Fez, where the crimson berries used to dye the hats came from.

In 1870, a new fraternity of Masons in New York called the Shriners International was formed. Two years later, they adopted the fez as a symbol of their brotherhood and membership. Much like the white apron worn by Masons as a symbol of their brotherhood. The founding members were a fun loving group, focused more on amusement than ritual. Billy Florence, an actor and founding member, was much amused by an Arabian-themed party he had attended in France, which gave him the idea to adopt the fez as the symbol of the new fraternity.

Perhaps the artist Pamela Colman Smith was alluding to the light-hearted nature of the Shriners in the Seven of Swords. One wonders too, if she was making a commentary on their silly nature, boys being boys. The setting of this card certainly feels like a theater comedy.

⭐A red hat also appears here: 2 of Wands, 9 of Cups, but these hats are of a different style.

Why Does He Leave Two Swords Behind?

The man steals five swords, leaving two behind him. Waite mentions that two other swords ‘remain stuck in the ground’.

Is there a meaning here? Why leave some of the stash behind?

Clearly, the figure has taken a decision to steal what he can, and not risk all. There is logic, planning and moderation here. He is not greedy. Again, whether you see this as sneaky or clever behavior, will depend on your viewpoint and the question you ask before drawing the cards.

Why is The Symbolism of The Sky Yellow in The Seven of Swords?

Given the seemingly underhand nature of this card, it seems strange that the artist chose to use yellow as the color of the sky, given that yellow is traditionally associated with optimism and positivism. Yellow is connected to the solar plexus chakra, our center of hope and inspiration. It corresponds to the element Air and is often used in Tarot to represent intellect and the spiritual mind.

The only other card in the swords suit with a hint of yellow sky is the Ten of Swords. One is left wondering why Smith used the color so dominantly in the Seven of Swords.

Yellow is also symbolic of cowardice, it is the Judas color.

Perhaps again we are being asked to choose a perspective or viewpoint. Does the yellow reflect clever thinking or cowardly behavior? The artist is going out of her way, not to make our minds up for us.

Why Does The Man Hold The Swords at The Sharp End?

The figure holds the five swords at the blade end, without cutting himself.

In the German school of swordsmanship, Mordhau, holding an inverted sword is a technique of surprise which allows one to strike the enemy with the pommel (grip) or crossguard (the metal bars) of the sword. The technique is called the murder-stroke or murder-blow. The murder-stroke can be used to surprise the enemy in close quarters. It is possible to enact this, without cutting yourself. It is the letting go that can be dangerous, which is perhaps our figure in this card, chose to leave the extra swords behind.

By holding the swords at the sharp end, our figure is clearly a clever, if not sneaky chap.

What Sphere Does The Seven of Swords Represent in Qabalah?

According to Kabbalah, God (Ein Sof) made manifestations. Each manifestation is called a Sephirah (plural, Sephirot). Sevens in Tarot connect to the seventh Sephirah called Netzach. Netzach translates roughly as ‘eternity’ and in the context of Kabbalah refers to ‘victory’ or ‘endurance’.

According to the Hermetic Order of the Golden Dawn, Haniel is the archangel who resides over the sphere. The order of angels that reside in the sphere are the Elohim.

The Ultimate Guide to Seven of Swords Symbols 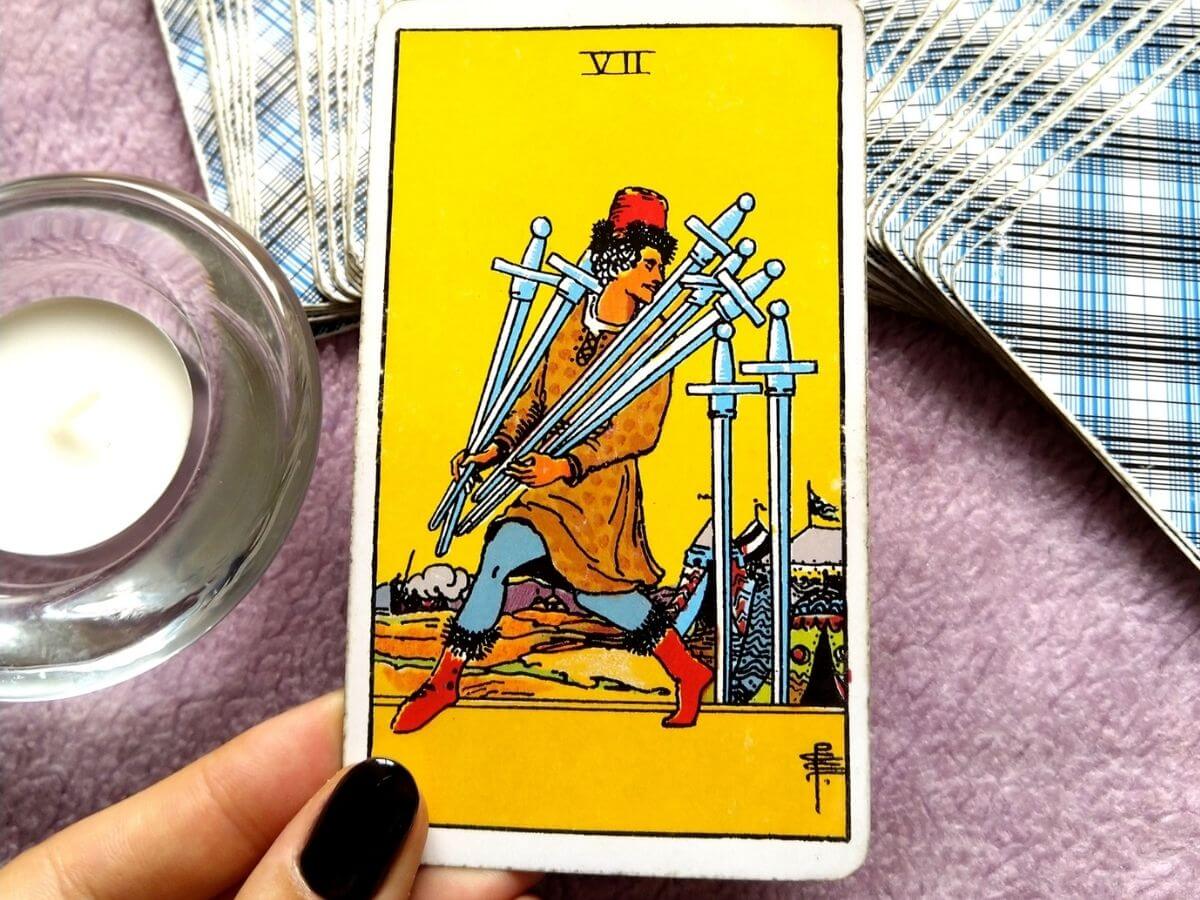