The divinatory symbolism found on this card is primarily drawn from the Tarocchi of Mantegna, mythology and western occultism.

What Does The Seven of Pentacles Symbolize?

A young man takes a break from tending his crops. He leans on his hoe and daydreams that the fruit on the bush in front of him has turned into money. Seven large coins appear, but it isn’t harvest time yet and there still remains much work to be done.

Pamela Colman-Smith took her inspiration for this card, from the Mantegna Tarocchi, also known as the Baldini Cards. The Tarocchi is a set of Italian cards from the 15th century. It was once believed that the famous engraver Andrea Mantegna created them, and then later the Florentine engraver Baccio Baldini. The name of the true artist, however, has been lost in time. The Tarocchi was not used as Tarot cards for fortune-telling, but most likely as pictorial educational tools for wealthy children.

In the Misero, we see a beggar resting on his hoe. The pose is very similar to Smith’s young man in the Seven of Pentacles.

Arthur Waite (author) and Smith (artist) seem slightly at odds with each other in the meaning of the Seven of Pentacles.

Waite says the 7 of Pentacles is “exceedingly contradictory”, being about “quarrels” on the one hand, and “innocence” on the other. He offers no explanation for these interpretations.

While the Seven of Pentacles is clearly about taking a break in work, Waite leaves open the question whether the break is positive, negative or neutral.

Smith however, seems to have decided that the break is positive. Her figure in the 7 of Pentacles appears calm, thoughtful and reflective. The only hint of potential drama here is the gray sky. Consider that a gray sky can suddenly break out into sunshine or rain.

What is The Meaning of The Gardening Hoe?

The man in the Seven of Pentacles leans on a gardening hoe. A hoe is an ancient and versatile hand tool used to remove weeds, clear soil and harvest root crops. The hoe is symbolic of ‘clearing the path ahead’ and bringing your efforts to harvest.

Within a Tarot reading, the appearance of a hoe – or any other tool – suggests that the reader can make life easier for themselves, if they use all of the resources (tools) at their disposal.

What is The Meaning of The Grapevine in The Seven of Pentacles?

Seven pentacles are attached a “clump of greenery”, according to Waite. However, Smith appears to have drawn the greenery as grapevines.

Grapes represent fruitful bounty in Tarot, and signify that this is a good time to pause and acknowledge your abundance and good fortune.

The nature of a grapevine is to grow and spread, and so a vine can also represent increasing luck and abundance in the future.

Jesus said in the Bible (John 15): “I am the TRUE vine, and My Father is the keeper of the vineyard. He cuts off every branch in Me that bears no fruit, and every branch that does bear fruit, He prunes to make it even more fruitful.”

In a modern context, this could be taken to mean, that those who wander too far from their spiritual path will experience less bounty in life. We are guided to regularly take a moment to reflect on our blessings, as the man in this card seems to be doing. He could be waiting for an epiphany or revelation of God.

We are reminded meditation and mindfulness helps us remain on the path of spiritual enlightenment.

What Sphere Does The Seven of Pentacles Represent in Qabalah?

According to Kabbalah, God (Ein Sof) made manifestations. Each manifestation is called a Sephirah (plural, Sephirot). Sevens in Tarot connect to the seventh Sephirah called Netzach. Netzach translates roughly as ‘eternity’ and in the context of Kabbalah refers to ‘victory’ or ‘endurance’.

According to the Hermetic Order of the Golden Dawn, Haniel is the archangel who resides over the sphere. The order of angels that reside in the sphere are the Elohim.

The Ultimate Guide to Seven of Pentacles Symbols 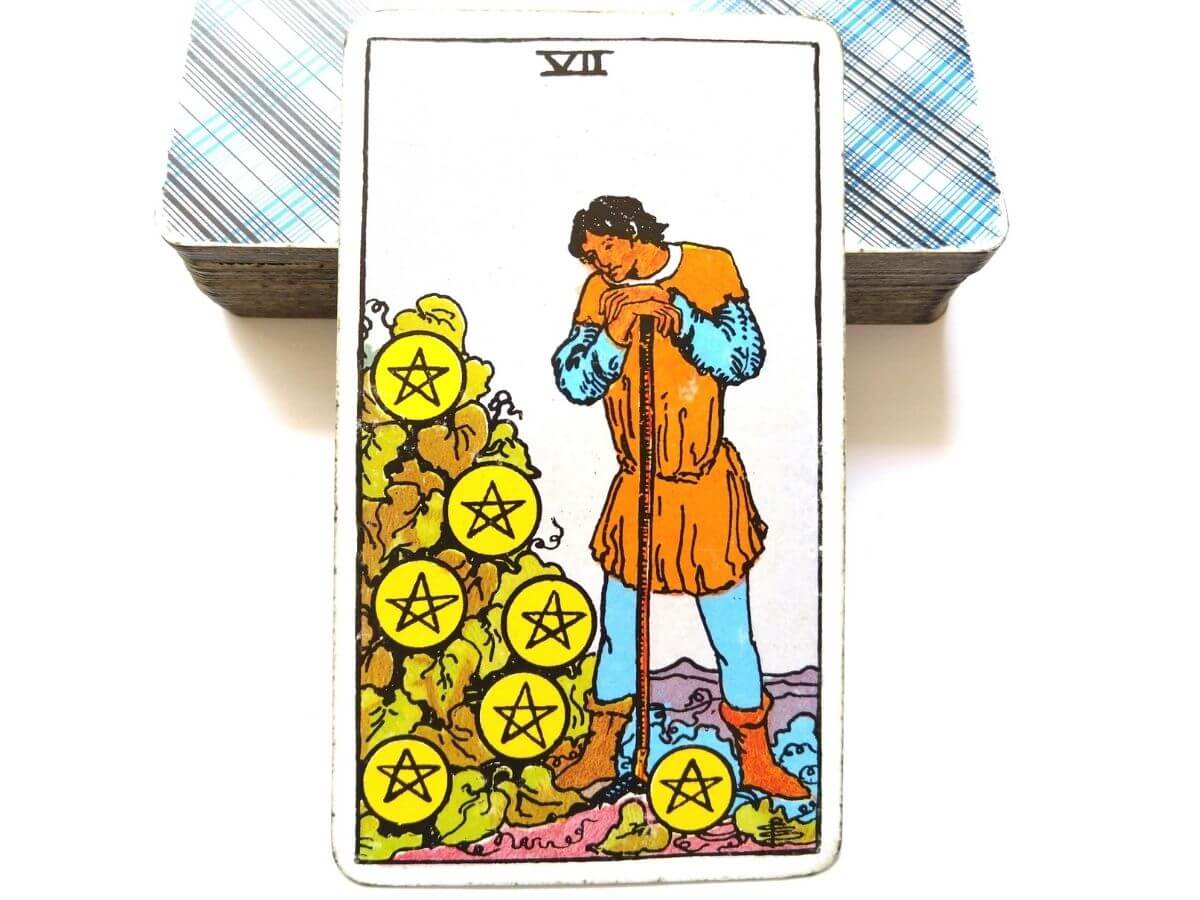