The symbolism found on this card is primarily drawn from mythology, alchemy and religious text.

“Strange chalices of vision, but the images are more especially those of the fantastic spirit”

What is Inside The Seven Cups in This Card?

Arthur Edward Waite describes these cups as strange chalices of vision. They are all up in a cloud which reflects their imaginary nature, the symbols inside those cups are not yet real, but still within the realm of imagination. Whether they are the result of wishful thinking, or thoughts of intention and manifestation, depends on who is reading the cards.

The seven cups display icons of varying forms of pleasure. The symbolic question you are asked, is: will you choose wisely? Or will you be like the kid in a candy store who wants it all and his failure to choose ends up with him leaving with nothing. We are reminded that the secret of manifestation is knowing what you want, and focusing all your intention on that one outcome.

To truly appreciate this card, you should read what each cup symbolizes, and make a decision on which ‘pleasure’ you most want to turn into reality with your intention.

What Does The Human Head or Mask Represent?

The human head in the Seven of Cups Tarot card may represent a potential romantic partner, if you are seeking your soulmate or twinflame.

The head may also be the face of an oracle who gives answers to all your questions. She could be the Oracle of Delphi, Pythia, the high priestess who was said to practice the art of divination.

It was believed in Delphi, that God lived within a laurel plant and He could provide predictions of the future through the rustling of the leaves. If you notice one of the other cups contains a victory laurel, which is an interesting connection.

What is The Significance of The Victory Laurel?

A laurel is a plant that was traditionally used to weave wreaths into a crown, which were given to the victors at sporting events in Ancient Greece and Rome. Today, the laurel is synonymous with achievement, and a laureate is someone who receives honor or recognition for achievement in the arts or science.

The victory laurel in the Seven of Cups symbolizes achievement. This could be anything from getting the job you want to passing your exams, or overcoming a significant obstacle that was holding you back.

It may also signify fame and public recognition. The rulers of Greece and Rome wore a laurel on their head to signify their rank, status and importance. If you see a portrait of Julius Caesar, chances are he is wearing a laurel.

This cup asks you: Do you want achievement, fame or recognition?

What is The Meaning of the Ghost or Veiled Figure?

The glowing figure hidden beneath the white sheet could be a ghost. The figure is shrouded in a veil of mysticism and suggests a paranormal nature. This cup asks, do you want to develop psychic, mediumship, healing gift, or knowledge of some other spiritual nature? In my experience, people who choose this cup are those who possess a gift (even if yet unacknowledged). The soul knows what the soul wants.

The ghost is the most dominant icon in the Seven of Cups, it is hard to miss the red glowing figure. Perhaps Arthur Edward Waite was secretly showing us his choice. Waite was a scholarly mystic who wrote extensively on the occult and esoteric subjects. He was a key figure in the Hermetic Order of the Golden Dawn and a some time member of the Knights Templar.

What Does The Snake Symbolize?

The meaning of the snake in the 7 of Cups is traditionally associated with transformation and major personal change. The change the snake delivers is so dramatic and intense, it feels like the old you is dying and a new you is emerging.

If you want to detox your life and experience a rebirth of body, mind and spirit – then this is the cup you will be drawn to.

Waite also placed a snake around the waist of the magician in the Magician Tarot card, which may offer insight into his intention. The Magician draws magic power from the heavens, and says As Above, So Below.

⭐The snake also appears in these Tarot cards: The Lovers Symbols, Wheel of Fortune Symbols

What is The Meaning of The Castle in The Seven of Cups?

The castle traditionally represents home and safety. It represents arriving at your destination after a long and arduous journey.

Maybe you have been studying for years and are praying now to pass your exams. Maybe you battled with health issues, weight problems or anxiety.

If you are attracted to the cup with a castle, it symbolizes you are focused on arriving at your destination, and your efforts are likely to be rewarded.

What Do The Jewels Mean?

The jewelry symbolizes wealth, money and financial security. Is this your main wish right now? the card asks.

What Does The Dragon Represent in The Seven of Cups?

The dragon is one of the most difficult symbols to interpret in the 7 of Cups. In Christianity, the dragon was a symbol of evil and the Devil, and heralds death and calamity. Obviously no-one, in their right mind, is going to choose that cup!

I assume, for that reason, the author had a different meaning in mind. In mythological stories, for example, dragons shoot flames of fire in the sky, and are associated with passion and power. Perhaps you want to discover your life purpose and true passion? If so, this is the cup for you.

The dragon is also associated with the study and practice of ancient mystical arts.

What do The Grey Clouds Signify in This Tarot Card?

Clouds have a variety of meanings in Tarot, depending on their color and type. The clouds in the 7 of Cups are dark and swirling, which suggests confusion and the need to make a choice.

The Ultimate Guide to Seven of Cups Symbols 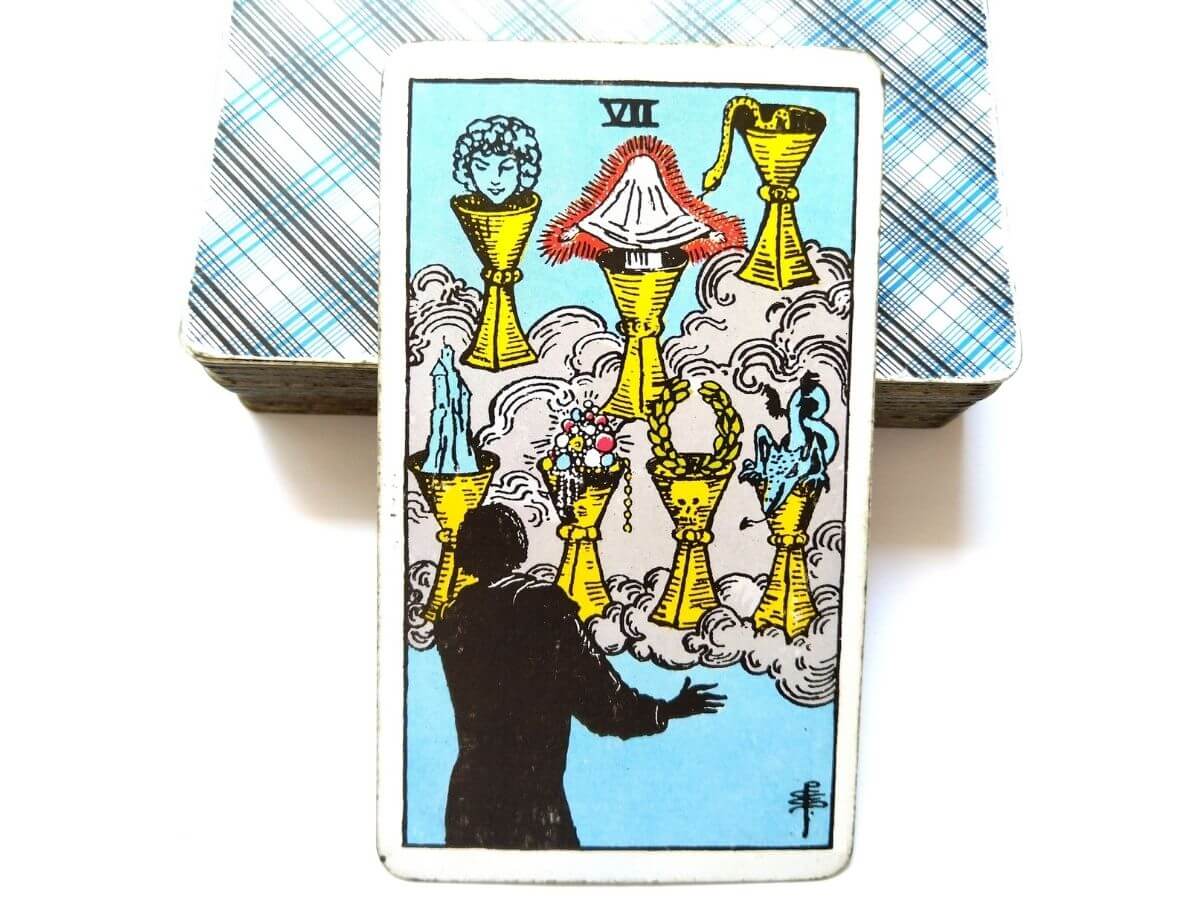