The Rider-Waite deck is the most popular Tarot deck in existence. It is estimated that more than 100 million copies of the deck have sold since its publication in 1909 by the Rider Company in London.

The Rider-Waite cards are based on the occult knowledge of Arthur Edward Waite, and was illustrated by Pamela Colman Smith, both members of the Hermetic Order of the Golden Dawn.

The Rider Waite Tarot deck, is also known as the Waite-Smith, Rider-Waite-Smith, and Rider Tarot Deck.

How Many Rider-Waite Tarot Cards Are There?

There are 78 cards in total in the Rider-Waite deck.

What Cards Are in The Rider-Waite Deck?

Major Arcana: There are 22 major arcana cards in the deck which represent the major stages in life’s journey. If a major card turns up in your spread, the events it predicts are fated to happen.
Minor Arcana: There are 56 minor cards, also called pips. These cards represent the day to day influences that affect your life.
Tarot Suits: The Minor cards are divided into four suits, Cups suit, Pentacles suits, Wands suit and Swords suit. Each suit represents a Tarot element, water, earth, fire and air.
Court Cards: Each suit has a set of royal or court cards – King, Queen, Knight and Page. These either represent personality traits or people in your life.

List of Tarot card meanings: Complete list with meanings and images of all 78 cards in the Rider-Waite deck.

Tarot card symbols: Complete list of symbolism in all 78 cards, explained in detail.

Why is The Rider-Waite Deck so Popular?

The Rider-Waite deck broke with tradition of previous Tarot decks, such as the Marseille Tarot and the Visconti-Sforza, by using pictures in the Minor Arcana cards. Rather than just showing a group of swords, cups, coins and wands, the artist Pamela Colman Smith worked human beings, flowers and animals into the mix and created a rich tapestry of occult symbolism that set the gold-standard for modern Tarot decks.

According to Waite, his cards were the first modern deck to be accompanied by pictures in the minor arcana. The 15th century Sola Busca Tarot, did have some figures in the pips – but there is no complete deck in existence to review. Pamela more than likely, even copied some of her images directly from the Sola Busca which were on display in the British Museum at the time she was illustrating her deck. (Read more on the history of Tarot cards).

Traditionally, the Major cards have always been easier to understand because they have been depicted with imagery. For example, Death represented by the Grim Reaper. The minors on the other hand required more learning by heart. The reader had to memorize the meaning of two cups, as opposed to three cups or four. Breaking with this tradition, and by inserting relevant images into the minor cards, the Rider-Waite deck made Tarot more accessible to the average person. This is why it is also considered one of the best decks for beginners, and why it continually receives the best reviews by readers.

History of The Rider-Waite Deck

In the mid-nineteenth century, Tarot was gaining appeal in Victorian England where occultism and spiritualism were rapidly spreading among middle class families. Movements like the Hermetic Order of the Golden Dawn and Rosicrucian Society incorporated Tarot into their teachings, and encouraged the use of cartomancy (divination using Tarot cards). Cartomancy, or card reading, was also spreading because of improvements in printing and transportation which facilitated the distribution of Tarot decks.

In early 1909, Aleister Crowley, an influential member of the Order of the Golden Dawn wrote a book called the Thoth Tarot, designed for the purpose of divination and illustrated by the British artist Frieda Harris.

As soon as Crowley’s publication appeared, Waite who was locked in academic rivalry with Crowley, engaged the artist Pamela Colman Smith, another member of the Golden Dawn, to design a new deck.

Design Of The Deck

Pamela was given six months to produce 80 designs in time for the printing press. There are 78 cards in the deck and no one is sure what the other two designs were but perhaps they were a title card and an advertisement card. She later claimed it was “A big job for very little cash.” Ironically, it was also the job that ended up giving her lasting fame.

It is probable that Waite described the design that he desired for each Major Arcana card, complete with the symbolism it should contain and the significance of each symbol.

In his 1938 autobiography, Shadows of Life and Thought, Waite wrote “My province was to see that the designs – especially those of the important Trumps Major – kept that in the hiddenness which belonged to certain Greater Mysteries, in the Paths of which I was travelling.” He went on to say that “I saw to it therefore that Pamela Colman Smith should not be picking up casually any floating images from my own or another mind. She had to be spoon-fed carefully over the Priestess Card, over that which is called the Fool and over the Hanged Man.”

How much Pamela had to be spoon-fed, is debated by Tarot scholars. But what is clear is that he put much more emphasis on the majors, which meant Pamela must have had more freedom with the minors.

Although the original art for the deck no longer exists, we can see from the printed copies that Smith drew the designs in black ink and colored them with watercolors in her usual manner. Art produced in this manner cannot be edited. If Waite desired changes once a design was complete, Smith would have had to recreate the entire piece, and considering the short time in which the work was completed that cannot have happened often.

One can see the difference in artistic style between the two arcana’s. The majors are packed with symbolism, dictated by Waite, and are highly elegant and symbolic. However, the figures are more static than those in the pip cards, in the mode of Gothic woodcut decks. In comparison, the figures in the minor cards are more mobile, as though caught on camera in motion, moving from one place to the next.

Discover: What is the best Tarot deck for beginners?

What Did The Rider-Waite Deck do Differently?

Waite believed that the Tarot originated as a mystical text of a secret tradition; with hints of the Egyptian Book of the Dead. He believed it had been misinterpreted by occultists before him. He wanted to give birth to a new Tarot deck that would rectify its symbolism and would stand as a valued work of art. His deck would include symbolism from Egyptian magic, Kabbalah, Christian mysticism, Enochian magic, hermeticism, Celtic revival, alchemy and freemasonry.

Few deck creators were so well versed in occult symbolism as Waite. Pamela on the other hand, had only been through two of the initiations in the Golden Dawn (Neophyte and Zelator), and according to Waite, appeared to enjoy the ceremonies more than the study.

The deck toned down on the Christian imagery associated with older Tarot decks. The Pope card became the Hierophant and the Papess for example became the High Priestess. The Minor Arcana are all illustrated, earlier decks tended to stick to simpler designs. For example the three of pentacles in older cards was represented with a picture of three coins, the four with four coins and so on.

In an article in 1908 for The Craftsman magazine, Pamela explained how to interpret her paintings, and the instructions could equally apply to interpreting her cards:
“Note the dress, the type of face; see if you can trace the character in the face; note the pose … First watch the simple forms of joy, of fear, of sorrow; look at the position taken by the whole body.”

The People Who Influenced The Imagery

While Waite was the key advisor to Pamela on the cards symbolism, she also turned to W.B. Yeats. The Irish poet was a high ranking member of the Golden Dawn, and was particularly interested in Tarot cards.

Pamela drew inspiration from the world of theatre and the stage when designing her cards. In many instances, such as the 5 of Swords and 2 of Swords, a solid line is drawn across the lower part of the card, giving the illusion of a stage.

Pamela also took the opportunity to include portraits of her friends in her paintings. We see a young Ellen Terry, a famous actress at the time and mother-figure to Pamela, in the face of the Queen of Wands. An older Terry, also appears as the lady in the 9 of Pentacles. Terry’s daughter the suffragette Edith Craig, appears in many disguises, as the androgynous Magician and as the King of Pentacles.

Since it’s publication first in 1909, the Rider-Waite deck has gone through several editions and modifications.

If you would like to buy the original deck created by Pamela, then buy ‘The Pamela Colman Smith Commemorative Tarot Set’. Or, a close alternative is ‘The Original Rider Waite’.

The Rider Tarot deck was published by William Rider & Son of London. The first print was limited. The back of the original cards feature a pattern of white roses and lilies on a blue background. The deck was packaged in a red two-piece box.

A larger printing run was carried out, featuring better quality card. This edition is referred to as the ‘A’ deck. It was published several times from 1910 to 1920.

Various editions of the Rider deck were published between 1920 and 1939. All of the Rider editions, up to 1939, were accompanied by a small guide book written by A.E. Waite called the Pictorial Key to the Tarot.

Tarot and divination declined in popularity during this time, and the revival of Tarot only came about in the late 1960s with the advent of the New Age ‘hippy’ revolution.

US Games Systems (USGS) re-published The Rider Tarot deck and packaged it in a bright yellow colored box. The back has a blue and white checked design.

The Universal Waite Tarot is published (USGS): The original cards were redrawn and recolored by artist Mary Hanson-Roberts. It is known for its warm colors and enhanced facial features of characters. The back is navy blue with gold stars.

The Original Rider Waite Tarot (USGS). This is a replica of the very first edition, with the roses and lilies design on the back of the card.

The Radiant Rider-Waite Tarot (USGS): Recolored version by Virginijus Poshkus. Many faces have been redrawn to show stronger emotions. The back of the card is violet with gold stars.

The Pamela Colman Smith Commemorative Tarot Set (USGS): An exact reproduction of Pamela’s original deck with muted colors. The back of the card has the Rosicrucian white rose from Death’s banner, and Pamela’s signature against a blue-gray background. 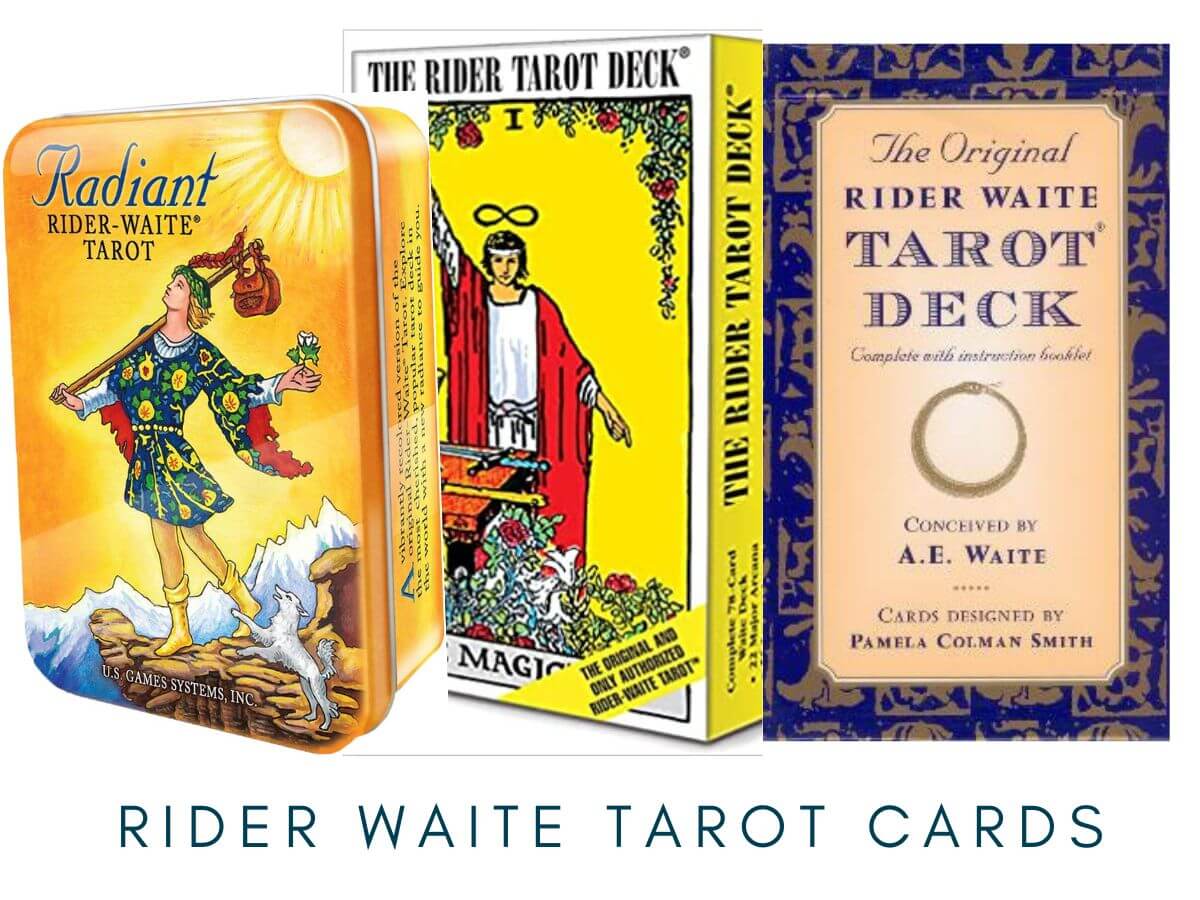