The symbolism found on this card is primarily drawn from mythology, astrology, poetry, metaphysics and western occultism.

“Her right hand raises the weapon vertically and the hilt rests on an arm of her royal chair; the left hand is extended, the arm raised; her countenance is severe but chastened; it suggests familiarity with sorrow. It does not represent mercy, and her sword notwithstanding, she is scarcely a symbol of power.”

Who Is The Queen of Swords In The Rider Waite?

A fair and solemn Queen invites the reader to approach her with her left hand, while holding an upraised sword in her right.

It is believed that Pamela Colman Smith, depicted her friend, the actress Ellen Terry (1847-1928) in her portrait of the Queen of Swords. Terry was a leading Shakespearean actress in Britain at the turn of the 20th century. There is certainly an aura of stage drama about this card.

Smith has taken her imagery inspiration for this Tarot card from the Tarot of Marseille deck, which has origins dating back to the 1700s.

Notice the relationship here, in both decks, the Queen raises her left hand to the reader, and holds a raised sword in her right hand.

The Queen of Swords has traits of Lady Justice, dispensing judgement. Or we could be witnessing a knighting ceremony, and she is calling you forward to claim your reward. She is ready to transmit some of her power to you, or bestow blessings through her, from God and higher powers.

This is one of those cards in the Rider Waite deck, where the author and artist seem at odds with one another. Arthur Waite writes of the Queen, “she is scarcely a symbol of power.” However, Smith has presented us with a woman who is clearly in charge, and who is both intimidating and encouraging.

In mythology, the Queen of Swords could be a symbol of Athena, the Olympian goddess of wisdom and war or Minerva, the Roman goddess of war.

Why She Holds a Sword in Her Right Hand

The hand is one of those body parts, most frequently used historically in art to depict a symbol. The right hand, typically the dominant hand for most people, holds the sword and is aggressive, while the left hand holds the warrior’s shield and represents passivity.

Here the Queen holds her sword as a symbol of her power, and she beckons more softly with her passive hand.

What Are The Symbols on The Queen of Sword’s Throne?

The Queen sits on a solid throne of stone. Etched into the throne are butterflies, an angel and a waxing and waning moon.

Butterflies, because they fly, are a symbol of the astrological element Air and the Swords suit. Air represents the realm of the mind, and so we are reminded that this Queen has an active mind, and is able to think for herself.

The butterfly is also a metaphor for reincarnation, and wisdom gained through many lifetimes.

Members of the Golden Dawn, such as the poet William B. Yeats, were well versed on the subject of death and rebirth and believed in the wheel of incarnation. He was an appointed advisor to Smith on the mystic symbolism to be incorporated into the Rider Waite deck. He wrote:

“And wisdom is a butterfly
And not a gloomy bird of prey.”

Yeats integrated many ideas he encountered – Neoplatonic philosophy, Zen Buddhism, Noh drama, Irish folklore, Eliphas Levi and so on – into his belief system in symbolism.

According to the Hermetic Order of the Golden Dawn’s interpretation of the Kabbalah, Cherubim rank ninth in the angel hierarchy.

However, in Medieval Christian theology, the cherubim are the second highest rank in the angelic hierarchy, following the seraphim.

Smith was a devout convert to Catholicism, and it is possible that she chose the Christian hierarchy on this occasion. She may be saying that the Queen is second in command, to the King. We note, Smith also included cherubim on the throne of the Queen of Cups.

We see a waxing (growing) and waning (declining) moon carved into the throne. This reinforces the theme of reincarnation, death and rebirth.

It also reinforces the Shakespearean drama of this card. We are reminded of Sonnet 15 by Shakespeare, a parable of time versus decay.

When I consider every thing that grows
Holds in perfection but a little moment,
That this huge stage presenteth nought but shows
Whereon the stars in secret influence comment;

Symbol of The Crown of Yellow Butterflies, Red Veil and Cloak of Clouds

The Queen of Swords is wearing a diadem crown, a type of ornamental headband worn by monarchs as a badge of royalty. The crown is a symbol of divine recognition, because royalty could only be conferred by God.

The ornaments on the crown are shaped as golden butterflies. The butterflies, a symbol of Air, represent thoughts taking flight. A single bird flies high in the sky, a messenger of the spiritual realm. As the Queen raises her vibration, she becomes more in tune with the spiritual world, and can ‘hear’ their guidance.

What is the symbolism of the veil? The Queen wears a red veil beneath her crown. In Tarot, the veil represents secrets, everything that is known but unspoken.

Red is associated with passion. This Queen does not approve of public displays of emotion and is very selective to whom she reveals her inner thoughts and feelings. This is why she has been accused of being the ice queen. The red veil tells us, however, that there is more to her than meets the eye.

The Queen wears a blue cloak embroidered with grey clouds. The sky-effect helps her merge into the background like a chameleon. We are meant to believe, that this Queen can adapt to her environment, she does not hold fixed views.

The clouds are also a symbol of the Air.

What is The Meaning of The Storm Clouds?

Storm clouds gather in the lower part of the card, and the movement of the trees indicate high winds. Notice however, that the storm seems to be contained to the lower half of the card. The sky above is blue and the single bird could be the dove returning to Noah’s ark, once the flood had passed.

While the storm gathers around the Queen on the earthly plane, she does not appear worried. Quite the opposite in fact, she is undeterred from delivering her message to the reader. This is because her thoughts are ‘elevated’ beyond the earthly plane, and we are thus led to believe that she has access to grander visions. She is above the daily grind.

The Ultimate Guide to Queen of Swords Symbols 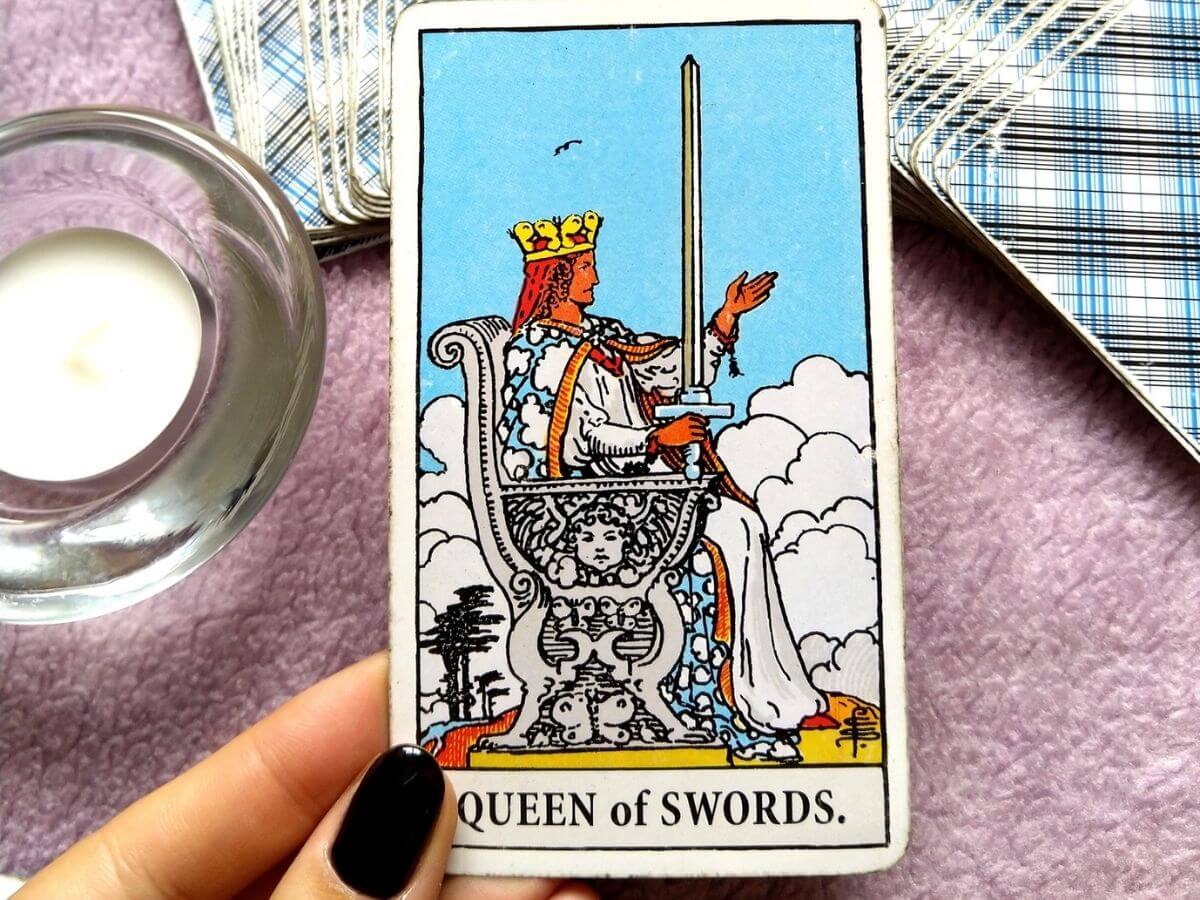