The symbolism found on this card is primarily drawn from mythology, astrology, occultism and Christianity.

Design Inspiration For The Queen of Pentacles

The artist Pamela Colman-Smith, in creating the Queen of Pentacles, was likely inspired by the Queen of Coins from the 15th century Sola Busca Tarot deck.

Smith created the art for the Rider Waite deck two years after the acquisition of photographs of the Sola Busca deck by the British Museum, and likely saw the cards on display there.

What Does The Pentacle Symbolize in The Queen of Pentacles?

A “dark woman” as A.E. Waite writes, “contemplates her symbol and may see worlds within.” Her symbol is the shiny pentacle, which the author suggests, is acting as a crystal ball. The Queen is possibly using her ball as a means of divination, for foretelling the future.

Seated amidst an oasis of abundant plant and animal life, this Queen represents the cardinal Earth sign and all which that implies. She encourages the reader to practice Earth Magic in witchcraft; that is, rituals and spells which encompass sacred sites, animal spirit guides, crystals and herbs. The bounty of Mother Earth.

As the Queen of Pentacles holds her precious pentacle, she encourages you to hold magical elements of the Earth in your hands for the purpose of manifestation.

What is The Meaning of The Carvings on The Throne?

The throne has carvings of cherubs, flora and rams.

An angel carved into the top of the throne, protectively watches over the Queen and all those who occupy the seat after her. If you want to achieve the status of this Queen, you will need to rely on divine guidance and protection.

The Hebrew Bible describes cherubim as the throne bearers of God.

The cherubim are the celestial attendants of God and are ranked in Christianity among the higher orders of angels.

The head of a ram is carved into the armrest of the throne. The ram symbol connects the Queen of Pentacles to the traits of Capricorn. This is the astrological sign she rules over, and it is represented by the glyph of a Goat.

In a Tarot reading, the presence of a ram can mean that it is time to take action and achieve or complete your goals.

The flowers and fruits carved into the throne are a symbol of fertility and abundance. This is a reminder that the Universe is eternally abundant, a Garden of Eden, when you are in the right frame of mind.

⭐Thrones appear in all the King and Queen cards in Tarot, as well as: The Empress, The Emperor, High Priestess, Hierophant and Justice

What is The Symbolism of The Crown in The Queen of Pentacles?

In Tarot, the crown can be a symbol of ultimate achievement, a sign of victory and expertise in an area.

The Queen wears a green veil beneath the crown, echoing the abundance and her connection to nature. The veil has a long history through the ages. Elite women wore the veil in ancient Greece and Mesopotamia as a sign of status and respectability.

What is The Meaning of The Rabbit in The Queen of Pentacles?

A rabbit, or possibly a hare, runs into view, bottom right of the card.

The rabbit is a sign of spiritualism in Tarot. It signifies that the querent is becoming more curious about the spirit world, and less limited by the material world. Under the influence of the rabbit, you may experience a spiritual gift emerging, such as clairvoyance or clairaudience.

The rabbit also hints that a great opportunity is about to come your way, and you will need to act quickly.

Lastly, the rabbit is connected with fertility and babies. It can often signify an unexpected pregnancy.

⭐Rabbit also appear here: This is the only card in the Rider Waite deck which depicts a rabbit.

What is The Symbolism of The Garland of Roses?

A garland of roses frames the picture in this card.

Red roses are associated with romance within a Tarot reading. They represent a love interest, affection and relationship. This card can signify a loving relationship which is blossoming, or alternatively, the rabbit may hint at a new relationship arriving soon.

The Ultimate Guide to Queen of Pentacles Symbols 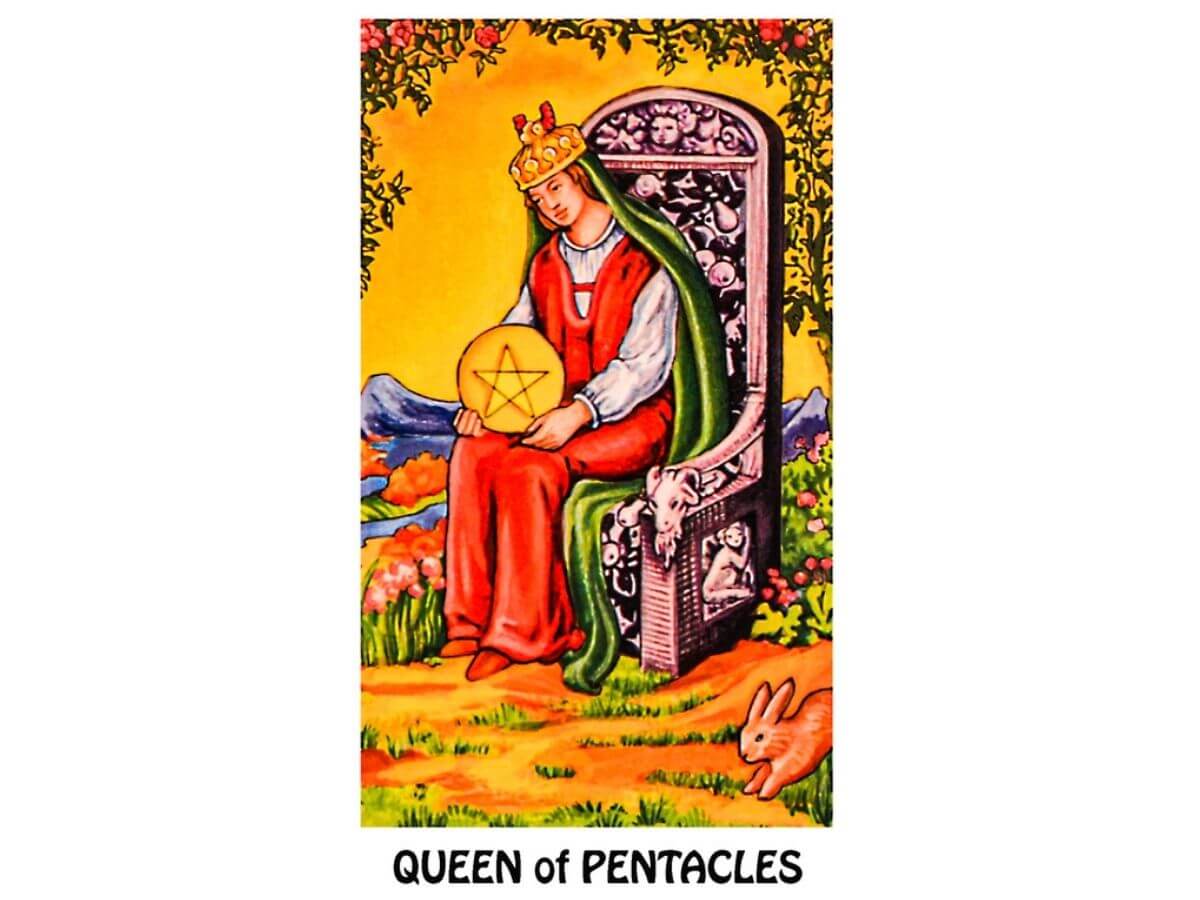