The symbolism found on this card is primarily drawn from mythology, alchemy, Greek philosophy, modern occultism and Egyptology.

“In a scene similar to the former, a young man stands in the act of proclamation. He is unknown but faithful, and his tidings are strange.”

Why Is The Wand Sprouting So Many Leaves?

A young Page holds a wand which has five sprouting leaves. This wand appears more fruitful than any other wand in the Wands suit, which typically only have two or three growths.

Each sprout is symbolic of growth or change, activities which occupy the querent’s mind. As the Page’s role is to deliver news, it seems by the abundance of growth, that he has plenty of exciting news to impart.

Why Is The Page of Wands Looking Up To The Sky?

The Page is looking upwards towards the sky.

The sky is symbolic of freedom and travel. When one says ‘the sky is the limit’, it means we should not limit our manifestations and dreams. The sky is blue and cloudless in the Page of Wands, signifying optimism and no real obstacles in the way.

The sky also represents transcendence, eternity and infinity. It is the residence of the gods and symbolic of omnipotence. The Page’s upward gaze is a reminder to acknowledge the metaphysical, hidden spiritual realm, and to say ‘thank you’ to the angels or Universe when you receive good news.

Finally, it is worth noting that the Page of Wands is the only main character in the Rider Waite Tarot deck who appears to pause and gaze obviously upwards. The mysticism associated with this card has been overlooked by many authors, and as such, it is a pure representation of the pursuit of conscious awareness. As Pages are also associated with study, this card can connect with spiritual pursuits such as psychic training, mediumship, energy healing and shamanism.

What Do The Hat and Red Feather Symbolize?

The Page wears a hat, which is similar to the type of hat worn by explorers in the early 1900’s, when the artist Pamela Colman Smith created this design. This may be another reference to the sky being the limit, and the idea of exploring and seeing the world.

Hats are also symbolic of keeping yourself ‘grounded’ in reality. Hats act as a barrier, preventing thoughts from flying too high and becoming airy fairy. This is a reminder, that while the spiritual realm can inspire us, we must still take action in a grounded manner to turn our dreams into a reality here on Earth. For example, while it may be nice to dream of travel or live the lap-top lifestyle, what will you actually do about it?

The Page has a red feather in his hat. A similar red feather also appears in the Major Arcana cards The Fool, Death and The Sun.

The feather could be an ostrich feather, the symbol of the Egyptian Goddess Maat or Ma’at. Maat represents the moral principles by which we should live our life, that is, acting with honor and truth in all our dealings with other people.

Some believe it may be a phoenix feather. The phoenix is a symbol fire, and the Wands correspond to the astrological element Fire. This mythical bird is symbolic of hope, renewal and resurrection. While more believe it could be an eagle’s feather, which is symbolic of shamanic visions, foresight and manifestation.

Personally, I feel the Page is wearing an ostrich feather, symbolizing Maat, which is more in keeping with the Egyptian theme of this particular card.

Red in Tarot is symbolic of motivation, vitality and passion, implying that this Page has an active mind. Red is also a symbol of luck and lucky times ahead. See also angelology symbolism, what it means when you find a red feather.

What is The Meaning of The Three Pyramids in The Page of Wands?

In the background, we see three mountains which resemble the famous Pyramids at Giza, placed suitably in the middle of a desert.

The Egyptian theme is particularly prominent in this card, from the desert setting, pyramids, explorer’s hat and Maat feather. No doubt, this is because modern Egyptology was hugely popular at the turn of the 20th century, when A.E. Waite commissioned the Rider Waite deck. At the time, the Golden Dawn, Freemasons and Ancient Mystical Order Rosae Crucis were using Egyptological studies to shape their identities and consolidate their occult and esoteric ideologies.

Pyramid’s are said to be imbued with mythical powers which is why occultists sometimes meditate inside pyramid structures to obtain extrasensory powers.

Pyramidologists (those involved in pseudoscientific speculations regarding pyramids) claim that the Great Pyramid of Giza was encoded with predictions for the future, from World War 1 to Armageddon and the end of days.

As such, the presence of pyramids in the Page of Wands is a direct reference to parapsychology, including premonitions and prophecy. It may also be a reference to the New Age symbolism of Mind, Body, Spirit.

At a simple level, the pyramids also support the idea of exploring and seeing more of the world. In an era before mass tourism, when these cards were created, Egypt would have been considered an exotic location indeed.

What is The Symbolism of The Lizards or Salamanders?

The Page’s tunic is decorated with lizards, or more specifically salamanders. In ancient alchemy, Salamanders were used to symbolize Fire, a tradition of which was later adopted by modern occultists.

Elemental Fire is commonly associated with the qualities of assertiveness, energy and passion. Fire is a prime method of conversion, everything touched by fire is changed, often beyond recognition. This is why Fire is respected not only in alchemy, but also witchcraft.

The Wands suit is powerfully linked to the element Fire, and thus Salamanders are the ideal symbol for this Page’s tunic.

It is also worth making another symbolic connection here: according to Plato, Fire is associated with a tetrahedron, or triangular pyramid.

The Ultimate Guide to Page of Wands Symbols 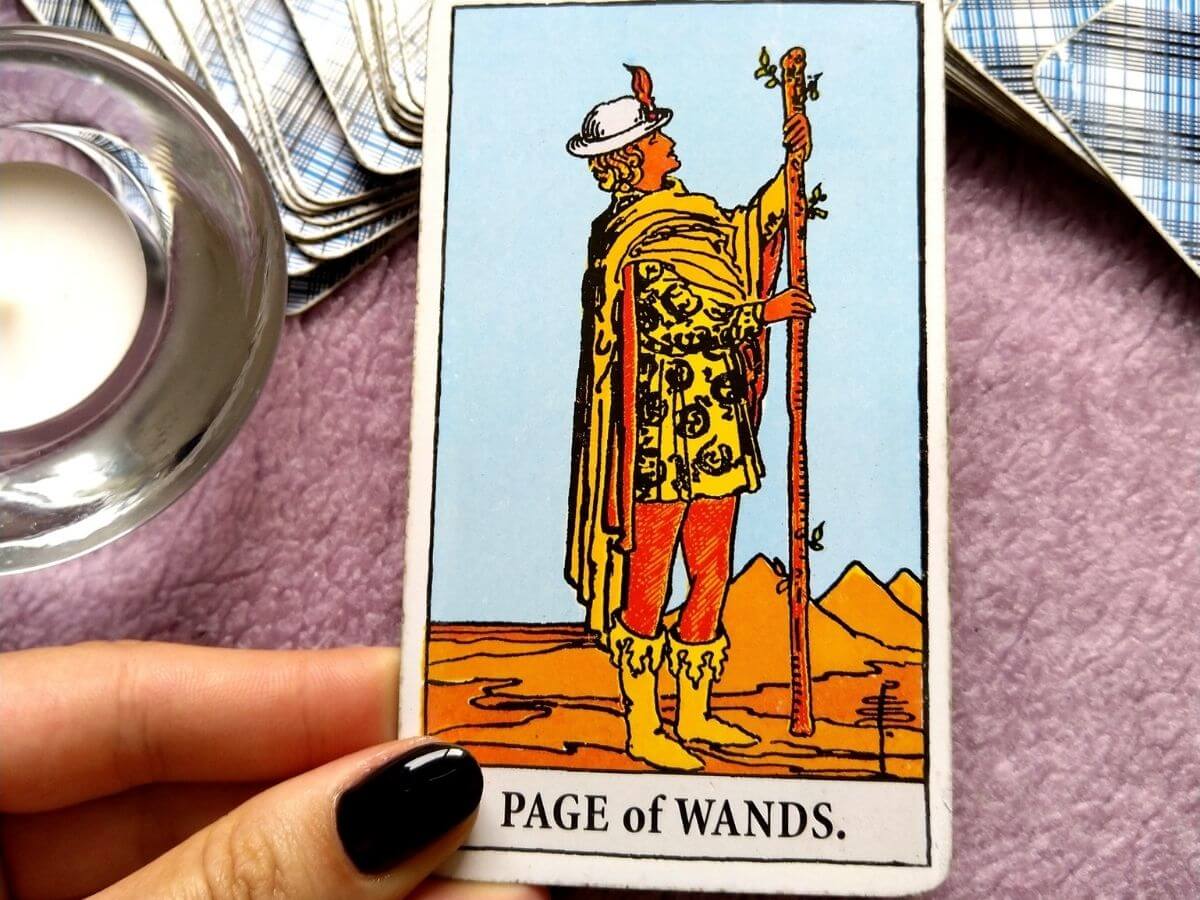