The symbolism found on this card is primarily drawn from mythology, alchemy, astrology, kabbalah, numerology and western occultism.

“One seated on her couch in lamentation, with the swords over her. She is as one who knows no sorrow which is like unto hers. It is a card of utter desolation.”

Imagery of the 9 of Swords: Discover symbol meanings, metaphors, legends and allegories

What Do The Hanging Swords Symbolize in The Nine of Swords?

A dreaming woman sits bolt-upright in bed, as if awakening from a nightmare in a cold sweat. She clasps both hands to her face, according to the author Arthur Waite, in ‘utter desolation.’

Nine swords loom ominously above her on the wall, forming as sort of aura. They could be a metaphor for the stairway to Heaven that Jacob dreamed about, as recounted in the Bible.

In Tarot, the swords suit represent the element Air and matters on the mind. The hanging swords thus become issues which are on your mind, ‘hangups’ or doubts. Similarily, thoughts which fester in your sleep and keep you awake at night. Dreams are often our unresolved problems kept on standby.

The woman in this Tarot card may not even be aware of the exact nature of her worries. She could simply feel a general state of anxiety, shame, doubt or be suffering a crisis of faith or confidence. These are her demons, take your pick. Swords are the scariest cards in the Tarot deck because they are a symbol of internal dialogue. Interesting how often we speak to ourselves in ways that we would never speak to another.

It is worth noting that the tips of the swords face eastwards. Indeed east is symbolic of new beginnings, because that is where the sun rises. In the Bible, the Garden of Eden was placed in the East and its entrance faced east. Metaphorically, east represents a spiritual awakening and ascension.

In numerology the number nine is associated with endings, which make space for new beginnings. It is a time we are forced to deal with difficult matters. Strangely, issues synchronistically come to a head, forcing us to move, or lurch forward, as the case may be.

In the late 18th century, nightmare paintings were all the rage. Such paintings usually depicted ladies tormented by the demons of the night. Ghosts, witches, sorcery and shape-shifting monsters would have been familiar imagery to the artist Pamela Colman-Smith as she approached the job of designing the Nine of Swords.

Why is The Woman Holding Her Hands Over Her Eyes?

The woman in the 9 of Swords, holds her hands over her eyes, a natural reaction perhaps to waking from a nightmare. The black background leaves us in no doubt that this scene occurs in the dead of the night.

However, there is symbolism in her temporary blindness, much like the figures in the 2 of Swords and 8 of Swords wear a blindfold. She is completely in the realm of her own mind, a dream-state or the astral plane. She may be attempting to cling on to the visuals or message from her dream.

Have you ever experienced that thud to your chest, which forces you to wake from a dream? If this has happened to you, you are likely to have remembered the dream you came from in vivid detail. It is as though someone wanted you to remember and take the message into your waking state. This is classic dream telepathy, the communication with another person, spirit, angel or guide in the dream state. Typically, this sort of psychic occurrence is most common around 3.30 am in the morning, known as the witching hour.

What Is The Witching Hour?
In folklore, the witching hour, also called devil’s hour, is a time of night between 3 am and 4 am that is associated with supernatural events. Ghosts, spirits, demons and witches are thought to appear and be at their most powerful during this hour.

What Are The Symbols Embroidered In The Bedspread?

A heavy quilt covers the legs of the woman. Interestingly, weighted blankets are known to offer a type of deep pressure therapy. The weight helps to ease several conditions including ADHA, autism, anxiety and sleep troubles.

The quilt is embroidered with the red rose of Rosicrucianism, a spiritual movement which embraced alchemy, Kabbalah, Hermeticism and Christian mysticism. The Golden Dawn styled themselves on Rosicrucian tradition.

Multiple zodiac and planetary glyphs can also be seen on the spread, including the symbols of Mars, the Moon, Saturn, and Taurus, Cancer, Pisces and Gemini; among others. These symbols may be a reference to the passage of time, as the planets and sun signs move through your personal astrological chart.

The Nine of Swords Tarot card is particularly associated with Mars in Gemini, an especially powerful astrological transit. It can trigger restlessness, excess mental energy and internal chatter.

The glyphs may also be a reference to the mighty fall of astrology divination.

While it may seem hard to imagine now, there was a time when powerful people like kings, queens and popes would turn to an astrologer for real-world guidance.

The base of the bed is carved with the images of two figures, each with two trees beside them. The trees possibly represent pillars on the Tree of Life in Kabbalah. The man on the right holds a sword above his head about to strike, while his opponent falls back, unable to defend himself.

At a basic level, this carving could represent being bullied, or feeling overwhelmed by another person’s personality. It may also represent your state of mind, and indicate that you feel vulnerable or ‘down at heel’ at this time.

The squares of the quilt are colored in yellow and blue. In the Rider Waite deck, yellow is linked to the element Air and the swords suit, and blue is connected to Water and cups. This combination of color indicates that what is on the readers ‘mind’ is something of an ’emotional’ nature, and most likely linked to a relationship or situation with another person.

What Sphere Does The Nine of Swords Represent in Qabalah?

According to Kabbalah, God made manifestations. Each manifestation is called a Sephirah (plural, Sephirot). Nines in Tarot connect to the ninth Sephirah, called Yesod.

According to the Hermetic Order of the Golden Dawn, Archangel Gabriel resides over the sphere. The choir of angels that reside in Yesod are the Cherubim.

The Ultimate Guide to Nine of Swords Symbols 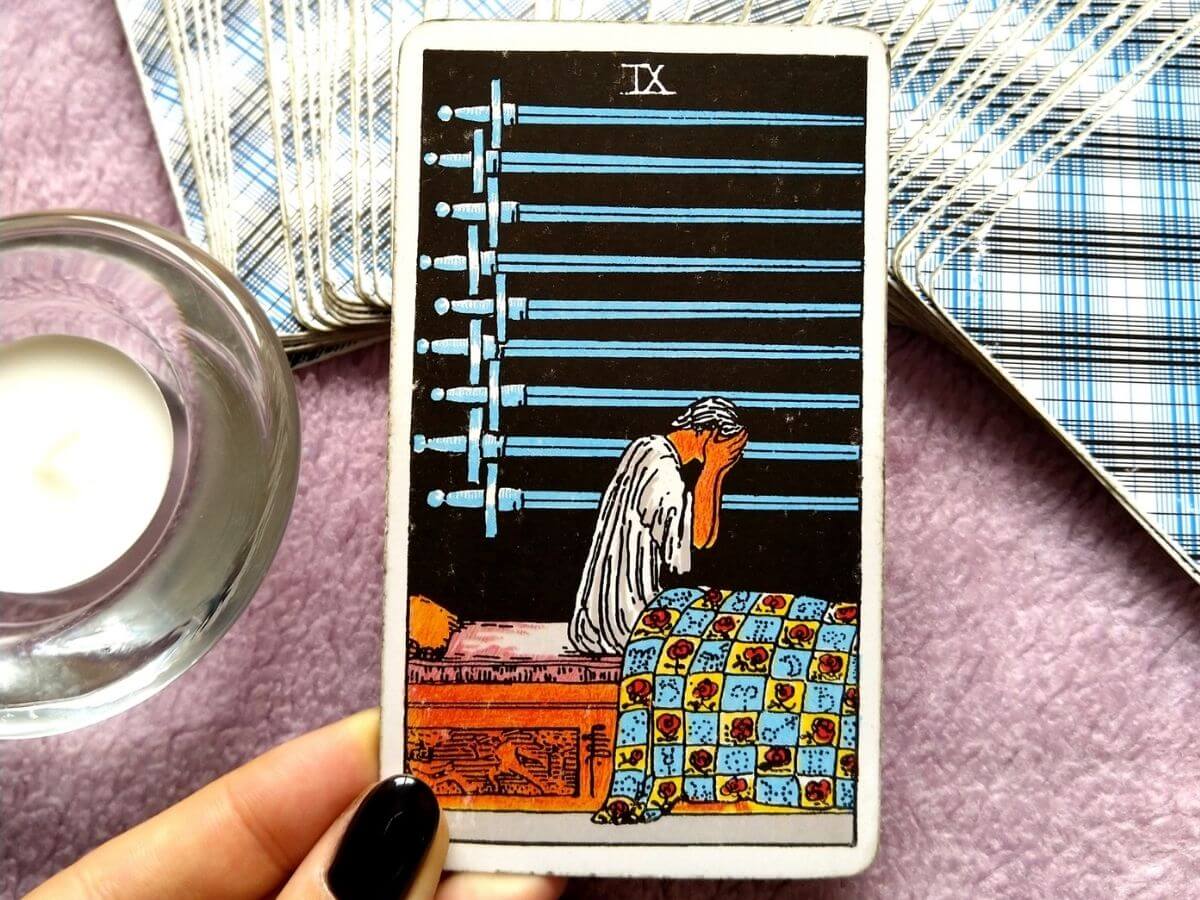