The symbolism found on this card is primarily drawn from mythology, astrology, metaphysics and Christianity.

Who is The Woman in The Nine of Pentacles?

An elegantly dressed, middle-aged woman stands in her garden surrounded by vineyards. Her manor house lies beyond. She is clearly in a position to take care of her own financial needs.

The artist Pamela Colman-Smith drew inspiration from her theatrical friends when drawing characters the Rider Waite deck. In the Queen of Wands she drew the younger face of her friend Dame Ellen Terry (1847-1928), a very famous actress in her time, and a woman that Colman-Smith loved like a mother.

Here, in the 9 of Pentacles, we see the face of an older and wealthier Ellen. Notice the distinctive jawline is captured in the card. The house in the background could be Ellen’s medieval manor house in Kent, England.

Waite describes the house as a “manorial house” which is possibly “her own possessions”. There is an underlying feminist theme in this card. Here we see a woman, who is obviously financially successful and in charge of her domain.

Ellen and Pamela, were also both supporters of the suffrage movement and women’s rights. Remember, women only received the right to vote, in England, in 1918.

Notice the floral pattern on the gown of the woman in this card, the flowers appear to take on the shape of the symbol of Venus – a circle with a cross descending from it. Venus has long been considered a sign denoting women, and female power. This Venus sign also appears in the Empress Tarot card, and signifies fertility and creativity.

What is The Meaning of The Bird or Falcon In This Card?

Waite mentions that the woman has “a bird” on her wrist. The artist has chosen to depict the bird as a hooded falcon.

The theme of feminism is reinforced here, by the similarity in the pose between the woman in the 9 of Pentacles and Colman-Smith’s famous poster, “A Bird in the Hand”.

We are reminded that a woman must always keep her guard up. The hooded falcon also becomes a symbol of restrained explosive power. What could a woman achieve if she had equal rights?

On a more metaphysical level, the hooded falcon guides the reader to remain vigilant, even when sitting comfortably. Outside of this Garden of Eden, there still remains a competitive world. This is why the woman wears a yellow glove, a symbol of awareness of the threat and a sign of self-protection.

The falcon, in combination with the manor home, also hint at inherited wealth and lineage. Ellen Terry herself came from a family of actors, and began performing as a child.

What Does The Snail Symbolize in The Nine of Pentacles?

Firstly, the snail is another coded warning in this card not to become too complacent. The lowly snail in the foreground, if left unattended, could eat his way through the luscious pentacles hanging on the bush.

Secondly, we are reminded that the shell of a snail forms a spiral pattern, reflecting the Golden Spiral or Fibonacci spiral. These precise geometric patterns, support the theory that a Higher Power had a hand in the design of the Universe. They are also a symbol of infinity, because there is no end to the spiral.

There is a real sense of mysticism about spirals – if you gaze long enough, you could fall into a trance and achieve some sort of divine truth and insights or conscious awareness.

What Do Grapevines Symbolize in the 9 of Pentacles?

The woman stands in front of a wall of grapevines. Nine luscious bunches of grapes hang from the vines, implying ripeness and harvest.

Arthur Waite mentions the grape motif in his explanation of this card. Grapes have long been a Christian symbol of sacrifice and redemption. The implication is, hard work eventually pays off.

Two trees frame the woman, one of either side of her. They remind us of the two pillars in the High Priestess, the Hierophant and Justice cards. The trees are a symbol of duality (male and female, ying and yang), as well as balance and harmony “in all things”, as Waite writes.

What Sphere Does The 9 of Pentacles Represent in Qabalah?

According to Kabbalah, God made manifestations. Each manifestation is called a Sephirah (plural, Sephirot). Nines in Tarot connect to the ninth Sephirah, called Yesod.

According to the Hermetic Order of the Golden Dawn, Archangel Gabriel resides over the sphere. The choir of angels that reside in Yesod are the Cherubim.

The Ultimate Guide to Nine of Pentacles Symbols 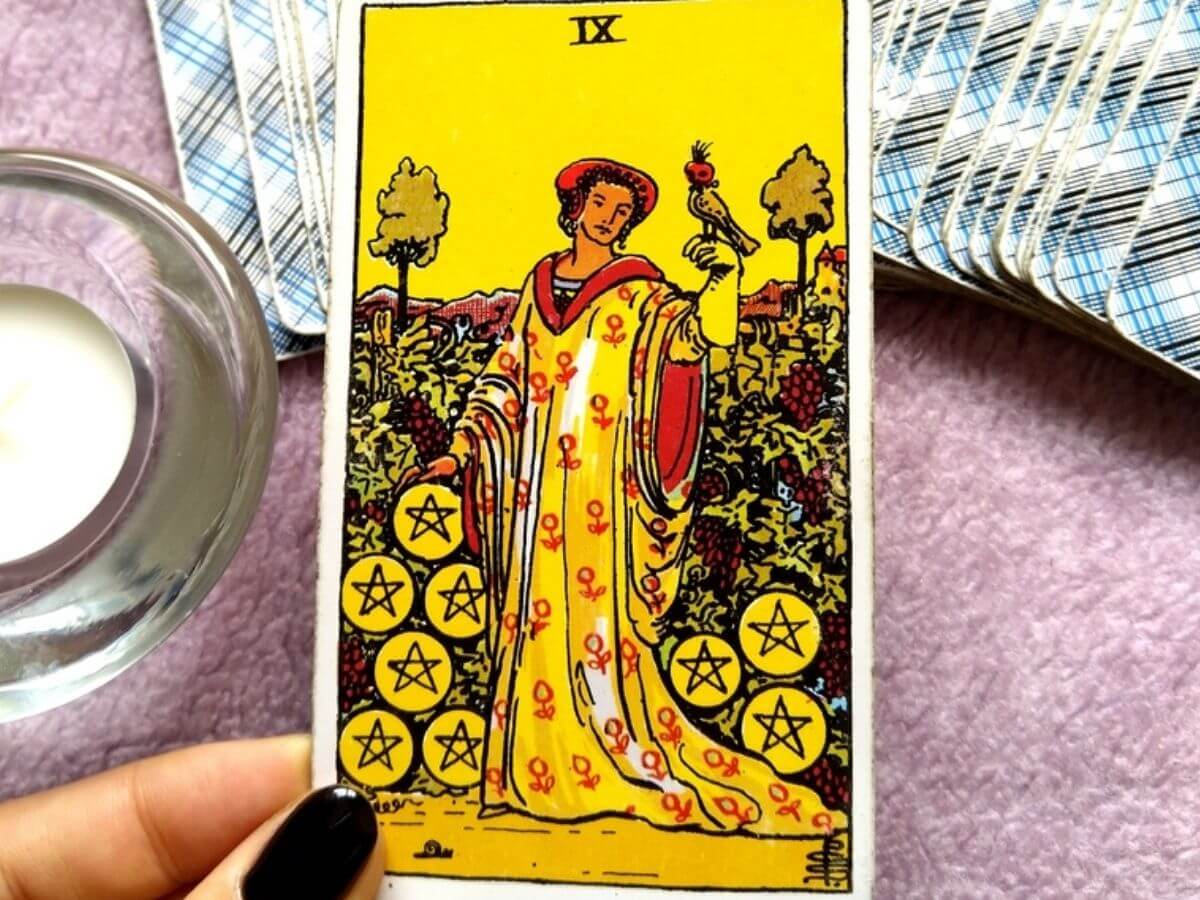