“A goodly personage has feasted to his heart’s content, and abundant refreshment of wine is on the arched counter behing him, seeming to indicate that the future is also assured. The picture offers the material side only, but there are other aspects.”

What Does The Man at the Center of This Card Symbolize?

A portly gentleman sits in front of nine cups displayed on a shelf behind him. His posture and expression convey self-satisfaction. This card is directly related to the Hermit card of the Major Arcana, which also depicts a person in solitude. In this instance, the 9 of Cups represents emotional happiness which is enjoyed alone. You are the only one who can really appreciate this moment or sense of achievement.

The main difference between this card and the 10 of Cups is that the ten card represents happiness which is shared with others, like family or the community.

The gentleman is wearing a red hat. Red in Tarot is symbolic of motivation implying this man has an active mind. In Asia, red is also considered a lucky color, which ties with the 9 of Cups being considered by fortune tellers as one of the luckiest cards in the Tarot deck.

There is a sense of mentalism about this man, as though he is jovially urging you to read his mind. Rub my tummy, he could be saying, I am the genie who has a fortunate prediction or prophecy to share with you.

Does The Bench Have Any Significance In The 9 of Cups?

Yes, in Tarot benches can represent wealth and advancement. The bench provides a physical support, helping you carry out a task for longer. In the 8 of Pentacles, an apprentice works hard while sitting at his bench and in the 3 of Pentacles he stands on a bench to attain higher places.

The bench is also a place you can sit and contemplate your success. In the 9 of Cups, the bench does not look too comfortable, so it is not a place that anyone is likely to linger too long. This is probably just a time-out of self-congratulation.

What is Behind The Blue Curtain in This Card?

The man is obviously happy to allow his nine cups to be seen, as they are displayed like trophies on the mantlepiece. These cups represent his material possessions.

However, he seems to be hiding everything else behind him, both with his body language and the blue curtain. What lurks beneath the curtain? Blue represents the element Water, and the subconscious mind. It could be emotions or memories he has dealt with or simply boxed away.  Whatever it is, he is politely indicating that it’s none of our business.

As I mentioned previously, this man could also be a genie. Perhaps he has just manifested your wish, and is about to pull back the curtain and reveal your delightful surprise!

What Does The Color Yellow Signify in Tarot?

Yellow color symbolism in Tarot: Yellow is the main color used by the artist in the Nine of Cups. As with all Rider Waite cards which are dominated by yellow, the central message is ‘sunny’ optimism.

In Tarot, yellow is specifically associated with the sun and the element Air. The Sun was worshiped in many ancient cultures for its positive energy, and hence the connection to optimism. The element Air is said to promote clarity of thought.

In such a way, yellow is the perfect color to represent the spiritual mind connecting with higher spheres and drawing down some magic.

⭐Yellow is also a key symbol in these Major Arcana: The Fool Symbols, The Strength Symbols, The Magician Symbols

What Sphere Does The 9 of Cups Represent in Qabalah?

In Qabalah (Kabbalah), the Nine of Cups depicts Yesod in Briah. Yesod is the ninth sphere of the Tree of Life, and it represents the foundation upon which God has built the world. Archangel Gabriel watches over this sphere and the Cherubim angelic choir who occupy it.

The Ultimate Guide to Nine of Cups Symbols 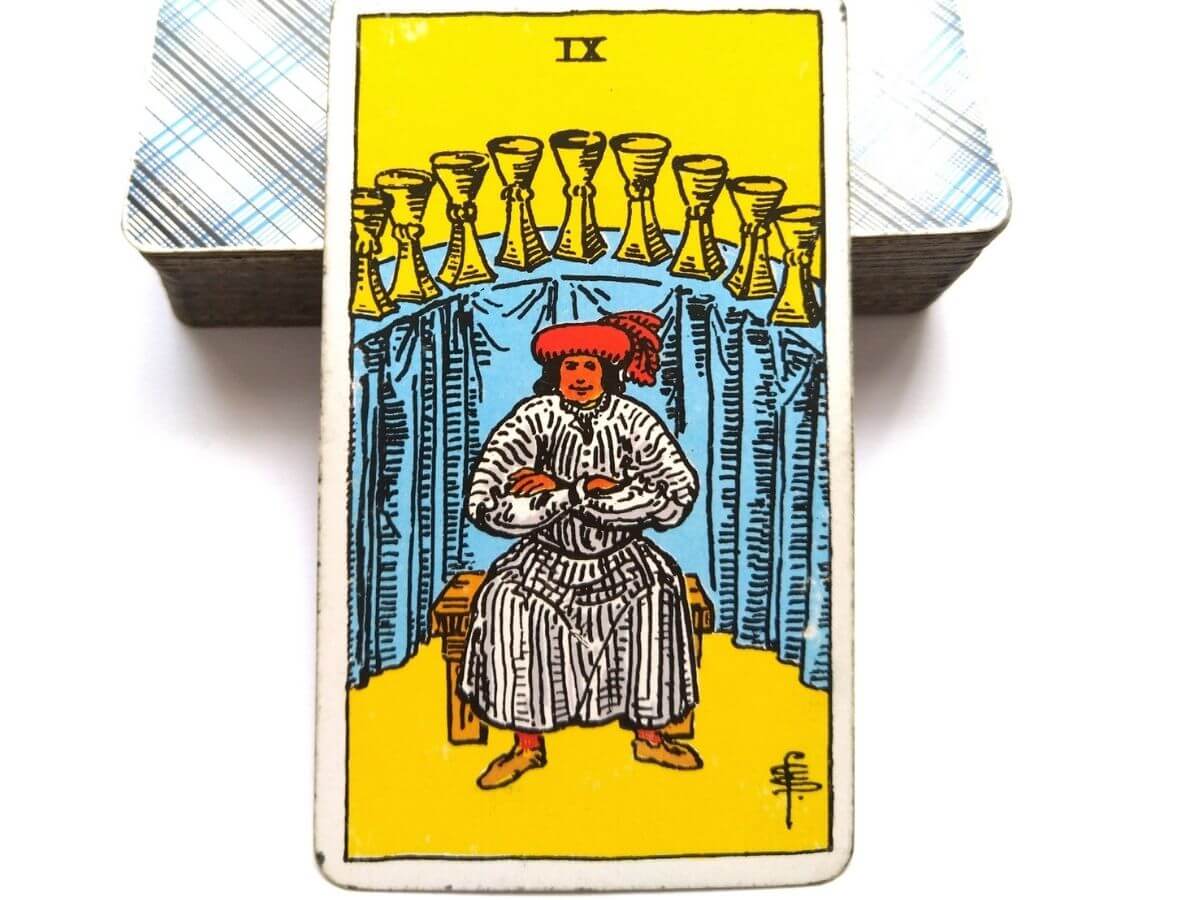