The symbolism found on this card is primarily drawn from mythology, alchemy, poetry, philosophy, metaphysics and western occultism.

“He is riding in full course, as if scattering his enemies. In the design he is really a prototypical hero of romantic chivalry. He might almost be Galahad, whose sword is swift and sure because he is clean of heart.”

Imagery of the King of Swords: Discover the symbol meanings, metaphors, allegories and legend.

Who is The Knight of Swords?

A Knight is depicted in armor, visor up, mounted on a white horse, charging into the wind with sword drawn.

Is This Knight Sir Galahad?

This Knight is a man on a mission. As the author A.E. Waite writes, our Knight is “pure of heart” and “might almost be Galahad”, the legendary Knight of King Arthur’s Round Table. Waite is probably referencing here the famous allegory poem by Alfred Tennyson:

My good blade carves the casques of men,
My tough lance thrusteth sure,
My strength is as the strength of ten
Because my heart is pure.

The Knight of Swords on his white horse and red flapping cape, certainly resembles popular iconic romantic imagery of Sir Galahad from the late 19th century.

While the Knight wears a full body suit of armor for protection, he rushes into action with his visor up. This is because those of ‘pure heart’ need no protection. God is on their side. Virtuosity and godliness is further enforced by the symbolic presence of a white horse, and the fact that our Knight is holding his sword in his right hand. Some occult and ceremonial magic groups equate the left-hand with black magic; and the right hand with white magic.

The Knight of Swords appears to be on an important mission of state. This is no Knight of Cups, seeking love, despite Waite’s description of him as a “hero of romantic chivalry”. This Knight is moved by a higher purpose, honor, bravery and a mission of importance, such as the search for the Holy Grail. He is moved by the romantic ‘idea’ of a mission. Swords represent the element Air, and matters of the mental mind.

If the Knight of Swords worked for a corporation, he would be the guy motivated by the company’s mission statement, rather than the exact nature of his salary.

In 1909, when Arthur Edward Waite commissioned artist Pamela Colman-Smith to illustrate his Pictorial Key to the Tarot (1910), she drew inspiration from the Sola Busca deck which was on exhibition at the British Museum at the time. Popular with cartomancers for the purpose of divination since the 15th century, this enigmatic deck is steeped in mysticism and history.

The Sola Busca Knight of Swords looks very similar to Smith’s version, perhaps moments before he charges ahead.

What is The Meaning of The Animal Symbolism in The Knight of Swords?

If you look closely, you can see birds printed on the bridle of the horse; and yellow butterflies and red falcons or eagles on the cloth around the horse’s neck. All of these creatures fly, and thus are symbolic of Air.

The birds we find in the Knight card, are the same birds that we find in all the royal cards of the Swords suit. Birds are messengers of Higher Powers, a metaphor for spiritual contact.

Birds scattered in the sky are symbolic of spiritual messages, waiting to be heard.

The birds on the horse’s bridle have been carefully chosen by the Knight, to symbolize his intent. He believes he is on a mission which serves a greater purpose.

The butterfly is a symbol of reincarnation. Members of the Golden Dawn, such as the poet William B. Yeats, were well versed on the subject of death and rebirth and believed the wheel of incarnations to last about 26,000 years, after which the soul attains freedom. Yeats, appointed an advisor to Smith on the mystic symbolism to be incorporated into Waite’s new deck, wrote:

“In a few years perhaps we may have much empirical evidence, the only evidence that moves the masses of men to-day, that man has lived many times. “
William B. Yeats 1934. Wheels and Butterflies

For angelic meanings connected with the Knight of Swords symbols, see: Spiritual meaning of butterflies

The red bird is most likely a peregrine falcon, one of the swiftest birds of prey in the world. They were used by Western European nobility for hunting and are associated with princes in particular.

Falcons are a metaphor for ambition, as they can soar to great heights; and are associated with psychic awareness due to their razor sharp eyesight.

Why Is There A Heart on The Horse’s Bridle?

If you notice, there is a heart on the bridle of the horse, just below the animal’s right ear. This is a strange icon to add to the card, and would be more suitable for the Knight of Cups, the classic lover.

Perhaps the artist wants us to know that the Knight of Swords is chivalrous, and not unfeeling in his ambitious gallop to the top. He is still excitable and prone to wearing his heart on his sleeve. One day, he will transform into the King of Swords, a man who is more cynical and wiser, and less prone to displays of emotional.

What is The Meaning of The Single Glove and Red Feather Plume?

The Knight is wearing one red gauntlet glove. These gloves were worn traditionally to protect the hand and wrists of a combatant. Smith probably intended the glove to represent a ‘thicker skin’, meaning our rider has become tougher for facing adversity.

The glove may also be a reference to ‘throwing down the gauntlet’. In times gone by, a Knight would issue a challenge to someone by throwing down their glove. Perhaps the Knight of Swords has thrown down a glove, and now is going about the business of competing.

This Knight has a red plume feather on his head. These plumes, also known as panaches, were common in 16th century tournament wear. The feathers indicated the color of the family name, status and wealth. Red feathers were most common, and symbolized the color of war and warrior.

One feels the Knight of Swords wants to appear as the successful hero, as much as be the hero. He is the guy who is only interested in the unicorn business idea, that makes him a billionaire rather than some ordinary millionaire. The more grandiose the idea, the better. Ah, the vanities and aspirations of youth!

See also, what it means when you find a red feather.

What is The Symbolism of The Windswept Trees and Stormy Sky?

Two windswept trees appear in the background. These may be the same trees we saw in the Page of Swords, but now we are much closer. The proximity is a sign of progression, we have moved beyond the state of waiting for news or ideas, to the point of acting on the ideas. Knights in Tarot always represent movement.

The Knight of Swords has received his instructions and is now charging off to find the battle. One senses, he fears that he will miss the action, classic FOMO – Fear Of Missing Out. He is the guy who gets a tip to invest in certain stocks, and hopes he is not too late to the party.

Sometimes speed is necessary, we need to act on an idea quickly if we are to capitalize on it.

The speeding clouds in this Tarot card are reminiscent of those found in the Five of Swords. The clouds are ragged, like a sword has ripped through them. It seems however, that the storm is passing, signifying the battle is coming to an end. He must rush if he hopes to gain any glory.

The Ultimate Guide to Knight of Swords Symbols 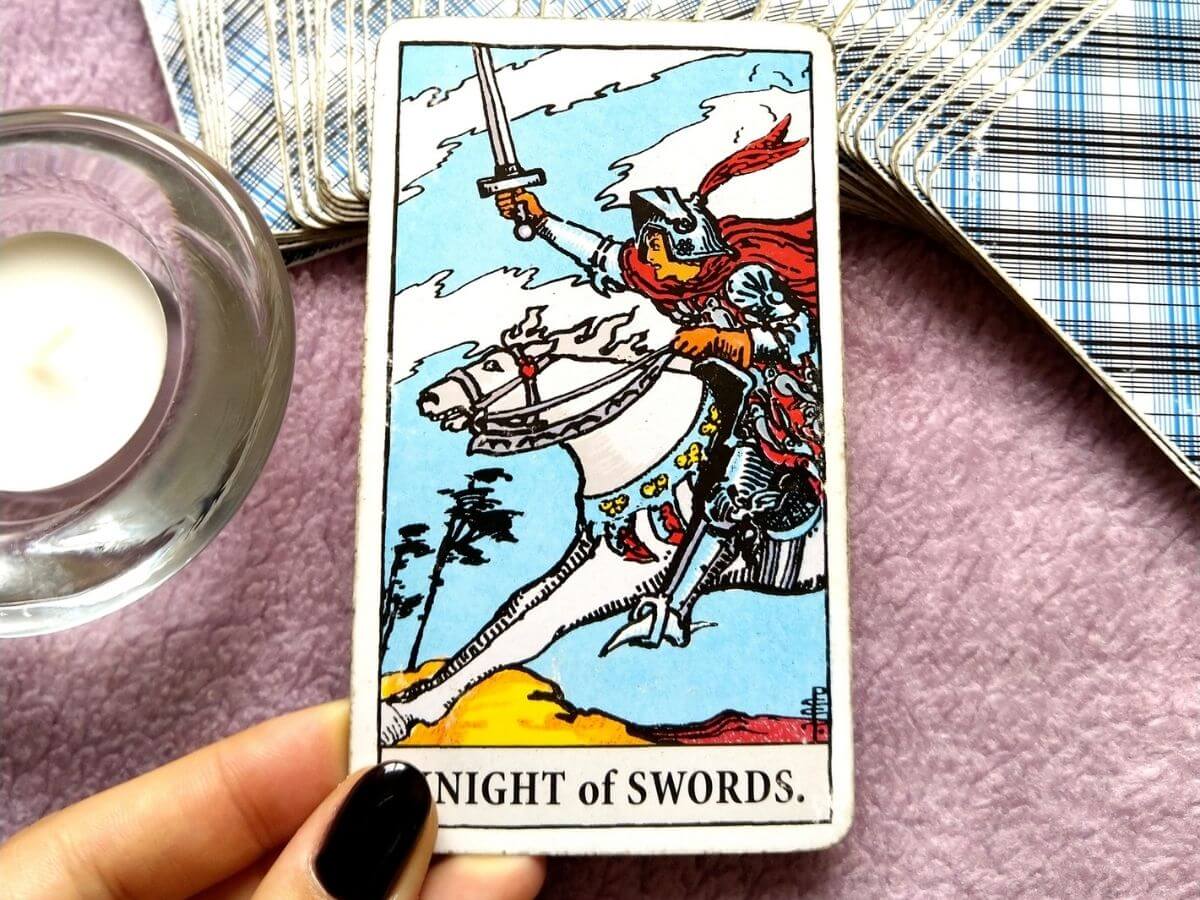