The symbolism found on this card is primarily drawn from astrology, western occultism and dream interpretation.

What Does The Horse Symbolize in The Knight of Pentacles?

The Knight sits on a massive, patient workhorse surveying his agricultural land. The horse is a Clydersdale which was traditionally used for farming and carriage pulling. This plodding creature reflects the slow and steady strength of the Knight.

In dream interpretation, a black horse signifies endurance and strength. Dreaming of black horses is the Universe’s way of telling you to persevere with your goals. You have the strength and stamina to make your dreams come true.

What is The Meaning of The Landscape in The Knight of Pentacles?

The Knight surveys the landscape in front of him. There is a large plowed field ready for planting, and beyond that two trees and a small mountain range. This is the largest field depicted in the Rider Waite deck, which signifies that there is great potential here for growth. Whatever you decide to plant and nurture could, over a period of time, turn into something quite spectacular.

In this card, the mountains are some distance away. This indicates that initial problems have been dealt with, and the Knight can expect plain sailing for a while. The yellow sky indicates fine weather, and the green grass suggests there is enough rainfall for whatever crops he plans to grow.

⭐Mountains appear in at least 25 cards in the Rider Waite deck. Here are a few more examples: Temperance, The Hermit and Eight of Cups

Two solitary trees appear in the distance. Trees are a symbol of life and prosperity in Tarot. These trees may be the fruit of his labor to date, and now he has bigger ambitions – an entire forest of trees perhaps?

⭐Trees appear in 23 cards, including: The Empress, The Lovers, The Hanged Man, The Star, The Tower

What is The Significance of The Knight’s Clothing?

The Knight delicately holds a shiny pentacle in one gloved hand. This pentacle could be a rare seed, an investment which he hopes will bear more fruit in the future.

He knows that it may take time to get there but he’s determined to work slowly and steadily towards that goal… With him I think of the phrase ‘Slow and steady wins the race’… Like the tortoise and the hare; he may not be the most dashing or the flashiest person around but he’ll get there in the end and it will be worth the wait.

Armor is a form of defense and in a Tarot reading, the appearance of armor signals that the querent is feeling vulnerable. One should look at how much armor the Knight is wearing, in order to assess the level of vulnerability.

The Knight of Pentacles and Knight of Wands wear gloves on both hands, while the Knight of Swords has one gloved hand. Interestingly, the Knight of Cups, considered the most open or naive of court cards, wears no gloves at all.

The Knight and his horse have matching green plumes on their heads.

Plumes, also known as panaches, were common in 16th century tournament wear. The feathers indicated the color of the family name, status and wealth.

The green color of the plumes in this particular card, is symbolic of nature, growth and manifestation.

The Ultimate Guide to Knight of Pentacles Symbols 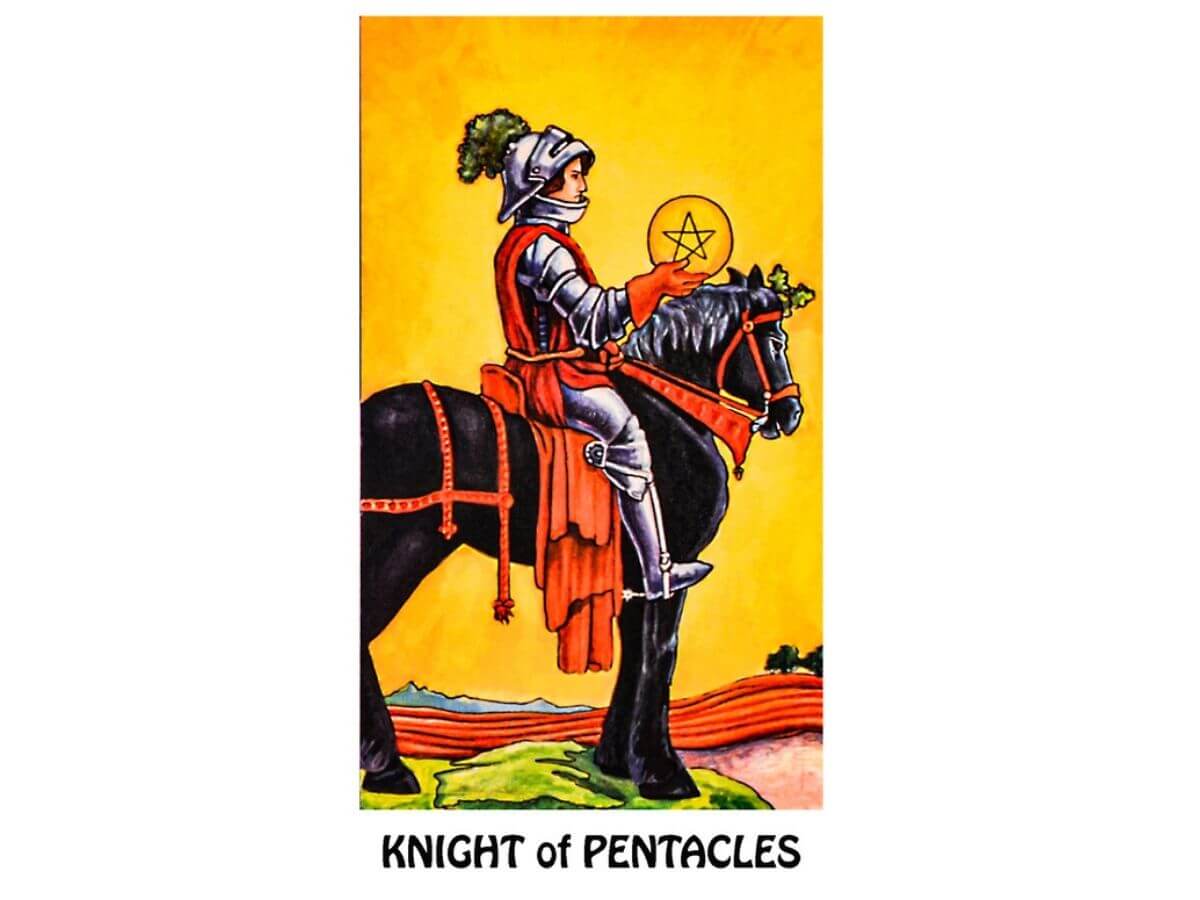