The symbolism found on this card is primarily drawn from mythology, alchemy, astrology, religious text and color theory.

“The King uplifts a flowering wand, and wears, like his three correspondences in the remaining suits, what is called a cap of maintenance beneath his crown. He connects with the symbol of the lion, which is emblazoned on the back of his throne.”

Imagery of the King of Wands: Discover the symbol meanings, metaphors, allegories and legend.

What Does The King of Wands Agitated Posture Symbolize?

This Lion is Not Tamed

The King of Wands sits on his throne and his demeanor is somewhat agitated. He is frowning and clenches his left fist slightly; his forward leaning postures implies he could leap from his throne at any moment.

He is unlikely, however, to over-react to a situation, because in order to become or remain King, he must have developed some degree of self-control and forethought along the way. No doubt he was, and perhaps still is, a fierce and fiery warrior on the battlefield; which reminds us that people’s base nature rarely changes.

There is a fire in this King’s belly, but it burns more tamely these days, yet it is still there and the flames can always be fanned. The ornamental lion attached to the chain around his neck, signifies ‘taming the lion’. But can you ever really tame a lion?

Note: The King of Wands is the ultimate personification of elemental Fire. His red hair and gown are the color of flames. Salamanders encroach the scene, an alchemist symbol for fire. He is surrounded by lions, symbolic of the Fire sign Leo. Even his crown is decorated with tongues of fire.

The King exposes both feet. This indicates that his feet are firmly on the ground and he can balance emotions and action. He wears a pair of green boots, and according to color theory, green is associated with nature. While esoteric theories of color are various, chromatherapists believe that green helps to relax a stressed person. The ruffled collar around the King’s shoulders appears to be a similar shade of green.

Why is The King of Wands Facing to His Right?

Notice that we only see the King in profile as he faces to his right. Since ancient times in iconography, Kings have been depicted facing right and holding objects in their right hand. In some instances, subordinates and defeated enemies were oriented to their left and frequently used their left hand to hold objects.

It is possible that the artist took the idea of right symbolism from the King of Wands in the 15th century Sola Busca deck. Smith created her art two years after photographs of the Sola Busca Tarot were acquired by the British Museum, and most likely she saw the cards on display there.

What is The Symbolism of The King’s Crown?

The King of Wands is wearing a diadem crown, a type of ornamental headband worn by monarchs as a badge of royalty. The crown is a symbol of divine recognition, because royalty could only be conferred by God. Equally, the doctrine implies that any attempt to depose or murder a king is a sacrilegious act and runs contrary to the will of God.

The crown appears to be decorated with tongues of fire. This could represent the tongues of fire which descended over the head of the Disciples in Pentecost, representing the endowment of the Holy Spirit.

“They saw tongues like flames of fire that separated and rested on each one of them.”

In a Tarot reading, the crown becomes a symbol of living your divine life purpose. You are achieving what you set out to do when you incarnated on this Earth; and are thus receiving blessings from the angels above.

What do The Lions on The Throne Symbolize?

The throne represents the seat of authority. As with the Queen of Wands, we do not see the top of the throne in this Tarot card. It appears to stretch upwards towards the Heavens, another sign of blessings and approval from God.

Two black lions are etched into the back of the throne, they appear much fiercer than the dancing lions on the Queen of Wands throne. Perhaps this references again the idea that this King has not really tamed his inner lion, and he could pounce at any moment, should he choose. I say ‘choose’ because he is not as hot-headed as he was in his youth.

According to Egyptologist Conni Lord, “The lion was a symbol of royal authority”, and the image of the lion was used in everyday items like beds and chairs, most probably for a magical meaning to do with protection.

Within a Tarot reading, the lion indicates that the querent has the necessary courage and emotional strength to overcome any difficulties that they are facing right now.

Why Are There Salamanders and What do They Symbolize?

The King of Wands has salamanders, a type of lizard, emblazoned on his yellow cloak and on his throne. The salamander was a favorite symbol of alchemists and was used to represent the element Fire. A large body of mythology, symbolism and legend has developed around this creature over the centuries, the chief characteristic being that it can live and thrive in fire.

Notice that the salamander’s tails are shown with their tails in their mouth. This closed circle represents maturity and completion.

Compare this to the salamanders in the Knight of Wands cloak, their tails do not touch the mouth, indicating actions not yet complete.

Compare also to the salamanders on the cloak of the Page of Wands, which appear haphazardly in every direction, indicating plans in an early stage and lack of experience.

What is The Meaning of The Salamander Near The King?

The Queen of Wands has her black cat, which acts as a witch’s familiar, or companion. Perhaps the salamander is the King’s equivalent, a magical protector and good luck charm?

The King is a warrior, he has no need for a real lion by his side, it would somehow diminish his personal authority. A magical fire creature, however, well that’s a different matter.

Symbolism of The Colors Yellow and Red in This Tarot Card

The King of Wand’s gown is red, and his throne is yellow. The Queen of Wands is the exact opposite, her gown is yellow and her throne is red.

The throne symbolizes the seat of power of a monarchy. Perhaps as a woman, the Queen of Wands requires a red throne to signal strength and the power of an army, in case people underestimate her due to her gender. The King’s throne is yellow, and yellow is associated with communication. This is his way of saying, ‘My reign is not brutal, I can be diplomatic too.’

The clothes we wear on the other hand are very personal, and represent our true personality. The Queen wears a yellow gown to reflect her more inspirational nature, and the King wears a red gown to reflect his more aggressive nature.

The Ultimate Guide to King of Wands Symbols 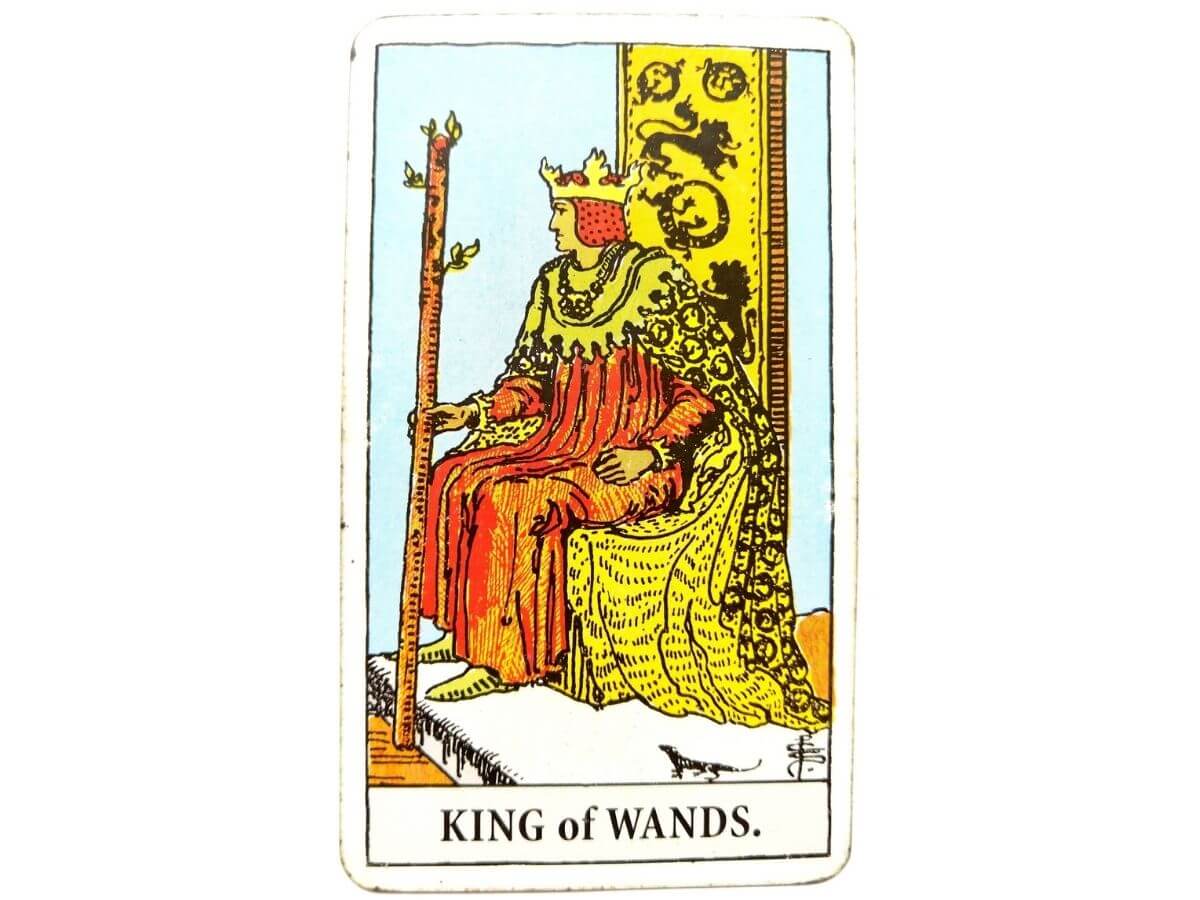