The symbolism found on this card is primarily drawn from mythology, aeromancy, astrology and western occultism.

“He sits in judgement, holding the unsheathed sign of his suit. He recalls, of course, the conventional Symbol of Justice in the Trumps Major, and he may represent this virtue, but he is rather the power of life and death, in virtue of his office.”

Symbolism and Imagery in The King of Swords

A king sits on his throne, leaning slightly forward, holding a sword in his right hand. Notice his left hand rests on his leg, he neither invites or repeals those who approach.

As Arthur Waite writes, the King of Swords recalls the “conventional Symbol of Justice” or Justice card in the Major Arcana. This is the moment the King passes a serious judgement. Moreover, there will be no debate, he has the office and wisdom of experience to know what is right.

The artist Pamela Colman Smith has taken imagery for the King of Swords directly from the Tarot of Marseille deck, which dates back to the 1700s.

Why Does The King of Swords Hold The Sword in His Right Hand?

The hand has been used historically in art to depict a symbol or meaning. The right hand, typically the dominant hand for most people, holds the sword and is aggressive, while the left hand holds the warrior’s shield and represents passivity.

Here the King holds his swords in his ‘aggressive’ hand to signify the power behind his words. His left hand rests passively on his leg, as though to say he has no axe to grind here, he is impartial in his judgement.

What is The Meaning of The Ring on The King’s Finger?

What is the symbol of a ring in Tarot?

The King wears a ring on the middle finger of his left hand. This is the marriage finger and shows that he is a man of commitment and responsibility.

The King is married perhaps, but alternatively it may mean that he is married to his Kingdom. The ring was placed on his hand during his coronation ceremony.

In a Tarot reading, the ring can signify someone is married to their job or work. It can also indicate a widower or divorced man still has feelings for his prior love.

⭐This King also wears a ring: King of Cups Symbols

What Symbols Are Engraved Into The Throne?

The King sits on a throne of stone. Etched into the throne are butterflies, a waxing and waning moon; and dancing nymphs in clouds.

The throne is so tall, it reaches beyond the scope of the card. Compare to the smaller throne of the Queen of Swords. The ‘reaching beyond’ is a sign of Divine authority, being ‘at one’ with God and the Universe.

Large butterflies fly upwards, a symbol of immortality, reincarnation, transcendence or inspiration. Compare this to the Queen of Sword’s throne. Butterflies are also etched into her throne, lower down. Thus indicating that they have further to climb.

Butterflies, as they fly, are also a symbol of the element Air, and the Suit of Swords.

A moon which is waxing (growing) and waning (declining) is carved into the throne. Notice it directly above the Kings head. We also see this lunar reference in the Marseilles version of the King, he wears the moon on the shoulders of his armor.

The moon connects with the basic rhythms of life and the universe, the passage of time and cyclical process of death and rebirth. It is also symbolic of fate and destiny.

Who are the naked nymphs dancing in the clouds, on the throne? Neither Waite or Smith reference this imagery. We assume they are mythological nymphs, beautiful young women known for their seductive powers (not to be confused with fairies). Notice how the maidens seem to be whispering in the King’s ear? They represent the temptations of the flesh and ego, thoughts that seduce us into abandoning our principles and responsibilities.

This may also be an homage, to the painting Hylas and the Nymphs, by John William Waterhouse which was exhibited at the Royal Academy in 1897. Waterhouse was a dedicated member the Hermetic Order of the Golden Dawn and involved in occultism and metaphysics.

What Does The Crown Symbolize in The King of Swords?

The King wears a golden diadem crown, a type of ornamental headband worn by monarchs as a badge of royalty. The crown is a symbol of divine recognition, as royalty could only be conferred by God.

A cherub angel, wings expanded in flight, is etched across the front of the crown.

ln Christian angelology, cherubim are the second highest order of angels in the celestial hierarchy. Originally they were charged with protecting the Garden of Eden, perhaps another reference here to temptation and the original sin of Adam and Eve?

More likely, is that the angel in flight is a symbol of a well-established connection between Heaven and Earth. The relationship is ‘flying’. Compare to the cherub in the Queen of Cups, where the direction of the wings suggest an angel about to take flight.

The king wears a hooded veil or garment under his crown. In Tarot, the veil represents secrets, everything that is known but unspoken.

As with the Queen of Swords, the veil is red. Red is associated with passion. This King does not approve of public displays of emotion, he does not wear his heart on his sleeve. The red veil tells us, however, that there is more to him than meets the eye.

Symbolism of Trees, Birds and Clouds in The King of Swords

Two birds approach in the sky. Birds represent the element Air and are symbolic of telepathy and messages from the spiritual realm.

In the other court cards of the Swords suit, the trees are blowing wildly in the wind. The trees are calm now, suggesting that the storm has passed and there is clarity.

Nimbus clouds hang low in the sky, dissipating after the storm to reveal a clear blue sky.

When a psychic reads Tarot cards, clouds become an occult reference to aeromancy, the method of divination which involves reading signs, and omens in the sky. This includes reading clouds, thunder, rain and the flight of birds. Cloud divination specifically is called nephomancy and involves observing the moment of clouds over a period of time.

The Ultimate Guide to King of Swords Symbols 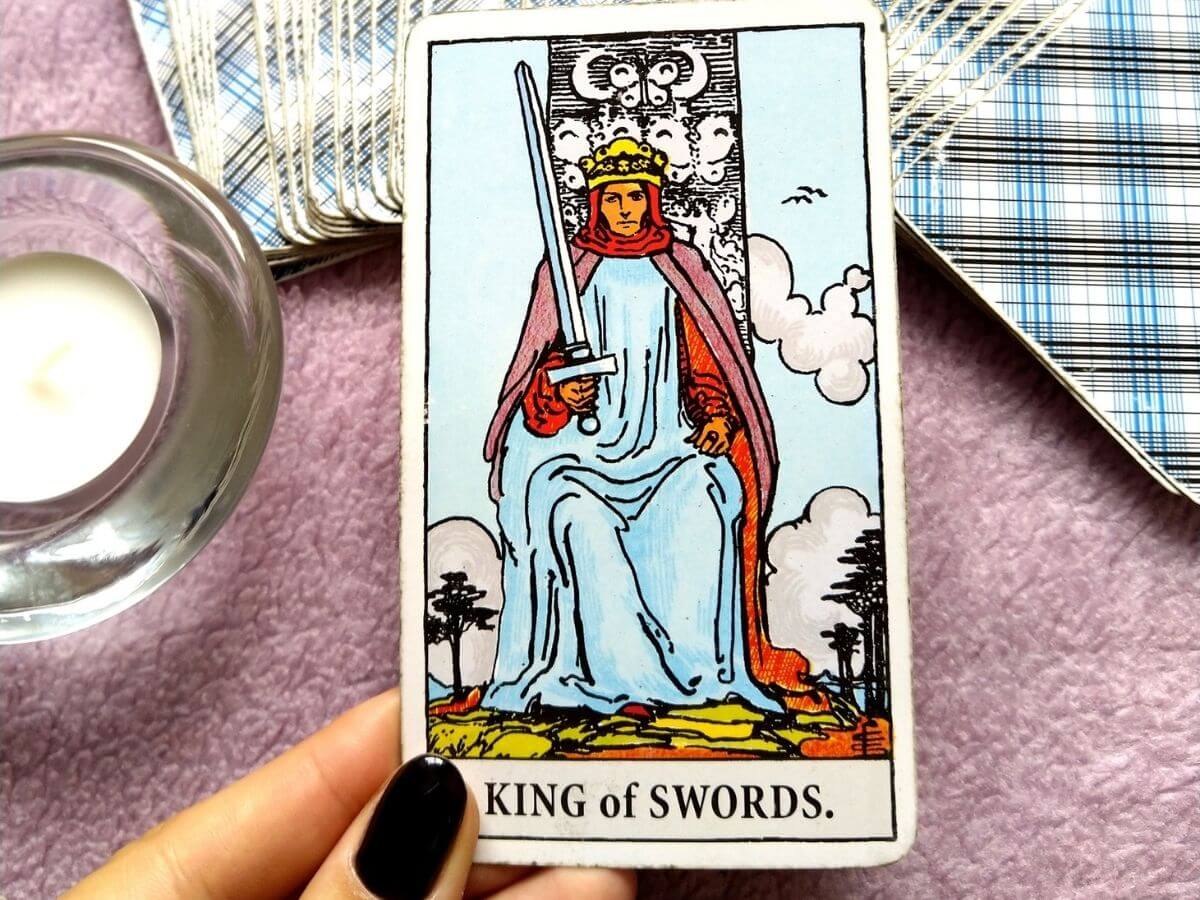