The symbolism found on this card is primarily drawn from astrology, metaphysics and western occultism.

“The figure calls for no special description; the face is rather dark, suggesting also courage, but somewhat lethargic in tendency. The bull’s head should be noted as a recurrent symbol on the throne. The sign of this suit is represented throughout as engraved or blazoned with the pentagram, typifying the correspondence of the four elements in human nature and that by which they may be governed. In many old Tarot packs this suit stood for current coin, money, deniers. I have not invented the substitution of pentacles and I have no special cause to sustain in respect of the alternative. But the consensus of divinatory meanings is on the side of some change, because the cards do not happen to deal especially with questions of money.”

Who is The King of Pentacles?

Who is the face in the King of Pentacles?

The life of artist Pamela Colman Smith – her religion and social affiliations all came together in the Rider Waite deck. It is likely that she depicted an older Edith Craig as the King of Pentacles. [Source: Pamela Coleman Smith, The Untold Story by Stuart Kaplan]

Edith Craig was a pioneer of the woman’s suffrage movement in England. She was the daughter of the famous actress Ellen Terry. Smith was close to both mother and daughter.

How empowering it must have been for Smith surrounded by feminist friends, to cast the King as a woman in this deck of Tarot cards.

The King’s face certainly resembles the straight-lipped appearance of Craig. She also appears as the face of the Magician in the Rider Waite deck.

Craig was clearly a liberated woman in her time, she was a lesbian who lived in a ménage à trois with two other women from 1916 until her death in 1947.

Her mother Terry also makes an appearance in the Rider Waite deck, as the face in the Queen of Cups, Queen of Wands and the woman in the Nine of Pentacles.

“The fact that the equality for which women struggled was believed by some in Pamela’s circle to reflect the existing divine order – as, for example, among Spiritualists, or in the Golden Dawn’s pantheon of divinities – brought the connection between political and spiritual realities full circle.”

What Does The Castle Battlement Symbolize in The King of Pentacles?

The King sits on his throne, which is placed on the battlement of his castle. This battlement reminds us of the Two of Wands, where perhaps a younger version of the King once looked out upon the world with hungry ambition.

The landscape beyond the walls of his castle have changed, new castles have appeared, indicating the passage of time and increased prosperity.

The battlement may also be regarded as a defining wall, the line between what has already been achieved, and what is still within the realm of possibility.

Note, however that the King has his back turned to what lies beyond the castle wall. He is holding and contemplating a large pentacle, the symbol of wealth he has managed to accrue. The abundance of plant life around his feet is another symbol of abundance. This King has achieved most of his goals, and is now more focused inwardly on enjoying the fruits of his labor.

What is The Meaning of The Throne Carved with Bulls?

The King sits on a black throne decorated with symbols of bulls; his left foot rests on the skull of a bull. As A.E. Waite notes, “The bull’s head should be noted as a recurrent symbol on the throne.”

The bull is a symbol of sacrifice and transformation in ancient Egyptian and Christian iconography. It is also a symbol of the astrological earth sign, Taurus which is represented by the glyph of a bull.

⭐A bull also appears here: The World Symbols, The Wheel of Fortune Symbols

What Is The Meaning The King’s Armor, Crown and Scepter?

The King of Pentacles is the only King in this deck who wears armor. Smith may have been referencing Craig’s status as a suffrage warrior.

The King wears a crown of lilies and roses, flowers which also appear in the Two of Wands card.

The rose appears by itself in many cards of the Rider Waite deck, but the lily never appears alone. Wherever you find a lily, you will find a red rose in the Rider Waite. Combined, this set of flowers are associated with the Virgin Mary. The rose becomes the rosary prayer, and the lily becomes the Madonna lily, or white lily. This may be a reference to Smith’s personal conversion to Catholicism.

The King holds a scepter in his right hand. A scepter is an ornamental wand or staff held by royalty as a sign of authority and sovereignty.

The King’s robes are decorated with grapes. Grapes represent fruitful bounty in Tarot, and signify that this is a good time to pause and acknowledge your abundance and good fortune.

The Ultimate Guide to King of Pentacles Symbols 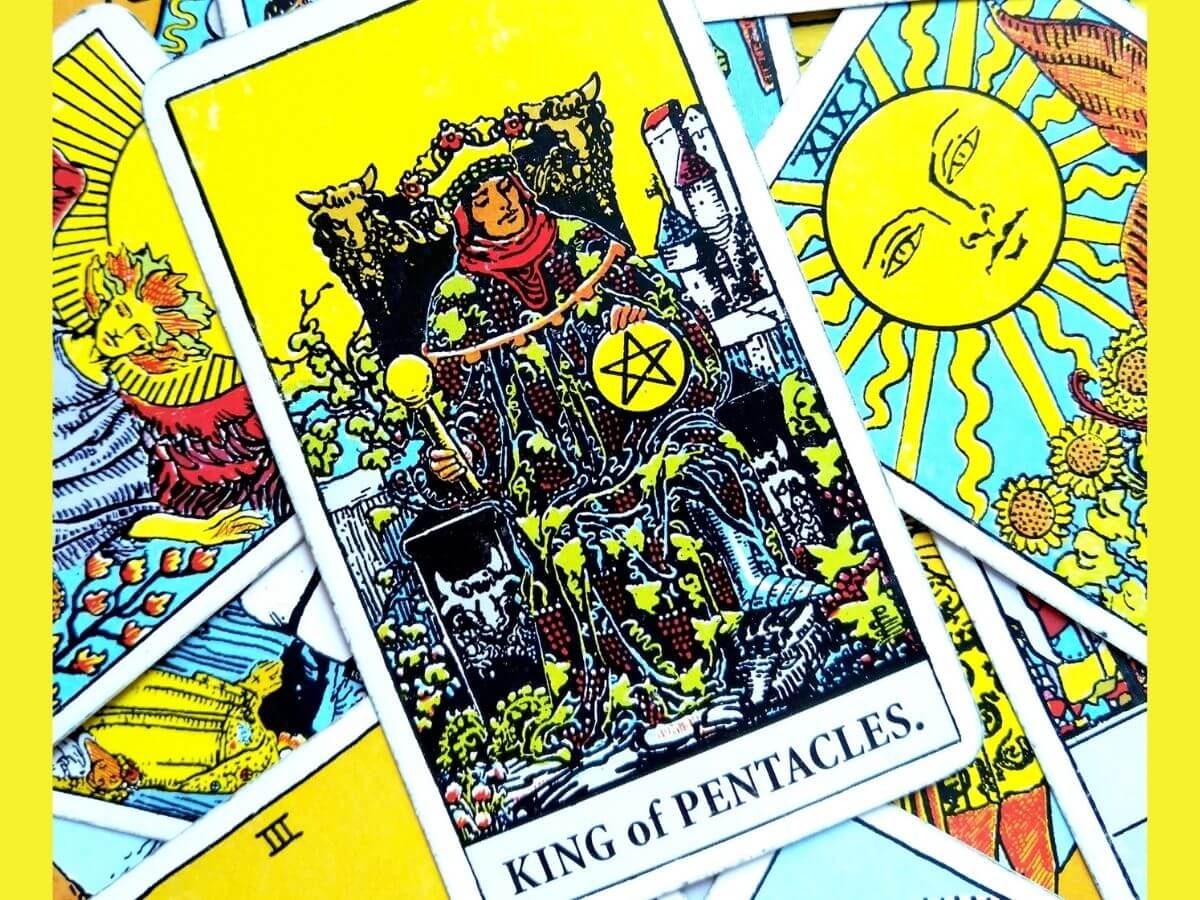