The symbolism found on this card is primarily drawn from mythology, philosophy, dream interpretations, metaphysics and astrology.

“He holds a short sceptre in his left hand and a great cup in his right; his throne is set upon the sea; on one side a ship is riding and on the other a dolphin is leaping. The implicit is that the Sign of the cup naturally refers to water, which appears in all the court cards.”

Why Is The King Sitting on His Throne in The Sea?

The King sits on this throne in the middle of the ocean. In Tarot, water represents emotions. The fact that this King has placed his throne on a platform in the sea, and is comfortably managing to keep afloat in the stormy water, signifies his mastery of emotions.

This King is not a cold character. He is comfortable in the realm of emotion and can feel empathy and passion for those around him without becoming upset himself.

Compare to the Queen of Cups who places her throne at the edge of the shore. She is not ready to trust the sea completely. As such, the King represents the next step in the evolution of self-mastery. He is the leader of his instincts now, not their obedient follower.

When we reach the enlightenment of this King, it means we have more control over our spiritual nature and are ready to serve others in a more serious way. This is why this King is considered an acclaimed counselor, psychic or healer.

The throne which this King sits on, is considerably less fancy than the Queen’s regal throne. This could be a reflection of I-Ching and Yin and Yang energy – the creative flair of the feminine Yin versus the solid masculinity of the Yang.

What is The King of Cups Holding in His Hands?

The King is holding the cup from the Ace of Cups in this right hand, and a scepter in his left. A scepter is an ornamental wand or staff held by royalty as a sign of authority and sovereignty.

The King is wearing a chain with a fish hanging around his neck, which may be a ‘secret’ reference to Christianity. The ichthys or ichthus is a symbol consisting of the profile of a fish. The symbol was adopted by early Christians as a secret symbol to recognize churches and each other during a time when they faced persecution in the Roman Empire. It later became known as the sign of the fish, or the Jesus fish.

Traditionally a crown is the symbolic ‘hat’ worn by royalty and sovereign rulers. In Tarot, the crown typically represents authority and stability. This King is clearly in control of his domain. However, the querent is guided to check with themselves, am I being recognized enough for my work and efforts?

What is The Meaning of The Jumping Fish or Dolphin in the King of Cups?

A fish, which the author A.E. Waite claims is a dolphin, playfully jumps out of the water. Personally, I think it looks like the fish from the Page of Cups, but we’ll go with Waite on this one. Dolphins typically symbolize the need for ‘play time’, and to take a break from monotonous routines. The appearance of the dolphin in this card reminds the rather serious looking King that he should retreat occasionally from his responsibilities.

A retreat allows time for personal development, and continued growth of spiritual connection. This is a particularly important message for anyone who works in the mind-body-spirit industry, like therapists, counselors and tarot readers. We need to plug out regularly, in order to tune in.

Remember: History is full of stories of ‘eureka’ moments: from Isaac Newton to Albert Einstein, people who had flashes of inspiration while thinking about other things.

Dolphins are also a message to move into deeper spiritual work, particularly if you dream of dolphins.

What is The Meaning of the Red Ship in the Background?

Boats and ships are an enduring cultural symbol and metaphor, deeply embedded in human consciousness. Ships belong to the world of the oceans, of other worldliness, a place of unpredictable beauty and destruction. We are in awe and fear of the ocean. For thousands of years sailors have navigated across oceans in search of the unknown.

In Tarot, a boat or ship represents going on a journey, whether that is an actual journey or one of the mind. Moving from one place or mindset to another. This journey may not be easy, and even scary, if it lands you in unfamiliar territory.

The presence of a ship at sea in this card, signifies that you are already well on your journey of discovery. The color of the ship is significant because red represents passion and energy, meaning you are energized by what you are experiencing.

Interesting note: In palmistry, the symbol of the boat means wisdom and moral courage.

⭐Boats also appear in these cards: Six of Swords Symbols, Two of Pentacles Symbols and Three of Wands Symbols

What is The Meaning of the Stormy Sea?

The sea is vast, majestic and awe inspiring. When the sea or ocean appears in Tarot, it signifies the querent is reflecting on life and asking the Big Questions, like, ‘Who am I?’, ‘Why am I here?’, ‘Does God exist?’, ‘Do humans really have free will?’, ‘Is what I see and experience real?’

The more stormy the sea, the more turbulent the mind. When we stop to truly ponder life, it can feel like a brain-frying experience! The more you learn, the less you know, sort of thing.

The King in this card sits unperturbed by the waves lashing around him, indicating that he is comfortable in the realm of philosophical discussions.

‘I think therefore I am’.

The Ultimate Guide to King of Cups Symbols 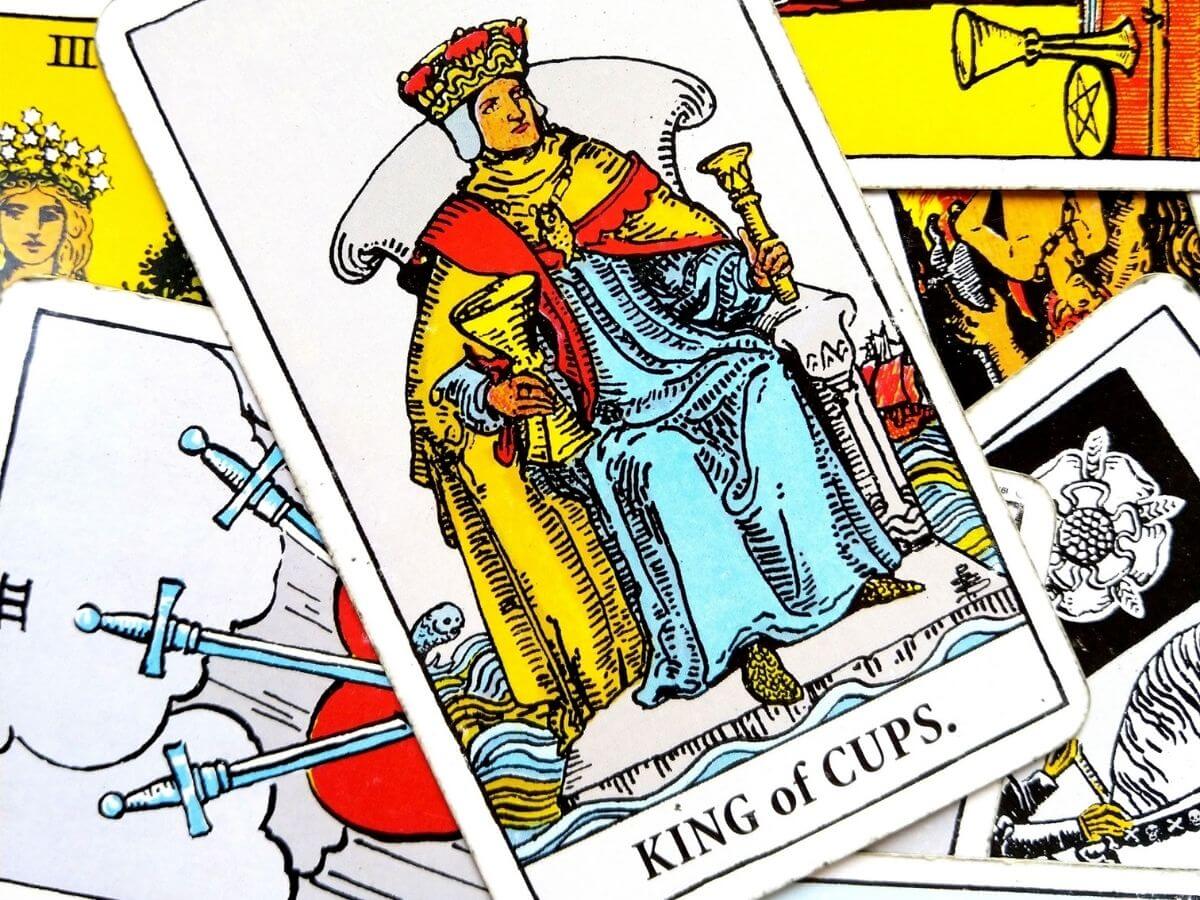