The symbolism found on this trump card is primarily drawn from alchemy, mythology, astrology and metaphysics.

A.E. Waite is quick to point out that this card “follows the traditional symbolism and carries above all its obvious meanings”.

In this regard, the Rider Waite version of Justice retains much of the iconography of older Tarot decks, such as the 14th century Visconti Sforza.

The Visconti Justice card shows Lady Justice wearing a toga and holding a scales in her left hand and a sword in her right hand. It’s worth noting that in some historical illustrations, the sword and scales are held in the opposite hands, and Justice wears a blindfold.

What is The Meaning of The Sword and Scale in The Justice Card?

The woman holds a sharp sword upwards, indicating victory. In ancient times, the sword represented authority, and conveys the idea that justice can be swift and final.

She holds a gold scale in her left hand. The scale is symbolic of balanced judgement.

What is The Symbolism of The Pillars in Justice?

The lady sits between the Two Pillars of Justice. In the Kabbalah, the ancient Jewish tradition of mystical Biblical interpretation, it is written that there are two pillars of justice: mercy and severity. The pillar of mercy represents forgiveness for wrong doings, and severity represents punishment in the act of reaping what we sow. The two Pillars depict the eternal opposites of judgement.

What he means by this, is that the High Priestess judges on spiritual matters concerning the soul, while Lady Justice confines her judgements to real-world actions.

Behind the figure of Justice is a red veil. A similar veil can be found behind the High Priestess. Veils are the curtain of illusion which hide reality. In this card, the veil represents the boundary between an action and its consequences.

The throne is a symbol of how justice manifests, or should manifest, in the physical world. The throne is made of solid rock. It is unembellished, unlike the ornately carved thrones of the Kings and Queens in the Tarot deck. We are led to believe that Justice should have no distraction, and be blind to wealth and influence.

The yellow background behind the veil is a reference to the element air (which rules logic and reason). The Golden Dawn designated yellow to the air signs, one of which is Libra, the zodiac sign attributed to this particular card.

You will note that the scale of justice echoes the shape of the sign for the element air.

What is The Symbolism of The Crown in This Card?

Justice wears a crown with three turrets. The 3 turrets and the 4 sides of the crown give the number 7. This Kabbalistic number represents the seventh Sephiroth in the Tree of Life known as Tiphereth, or Beauty. It is linked to Venus.

In addition, a crown in Tarot always indicates dominion and authority.

A blue square stone, possibly a lapis lazuli crystal, is set into the front of the crown. This crystal sits over the third eye chakra, aiding Justice’s ability to see truth through her higher consciousness. The third eye chakra is associated with spiritual attainment, especially anything to do with clairvoyance, clairaudience and other metaphysical abilities like telepathy.

A white shoe peeps out from underneath the woman’s toga. White is the color of the spiritual plane, and the shoe connects the woman to earth. The meaning of the white shoe is the manifestation of just judgements based on spiritual guidance.

The Ultimate Guide to Justice Symbols 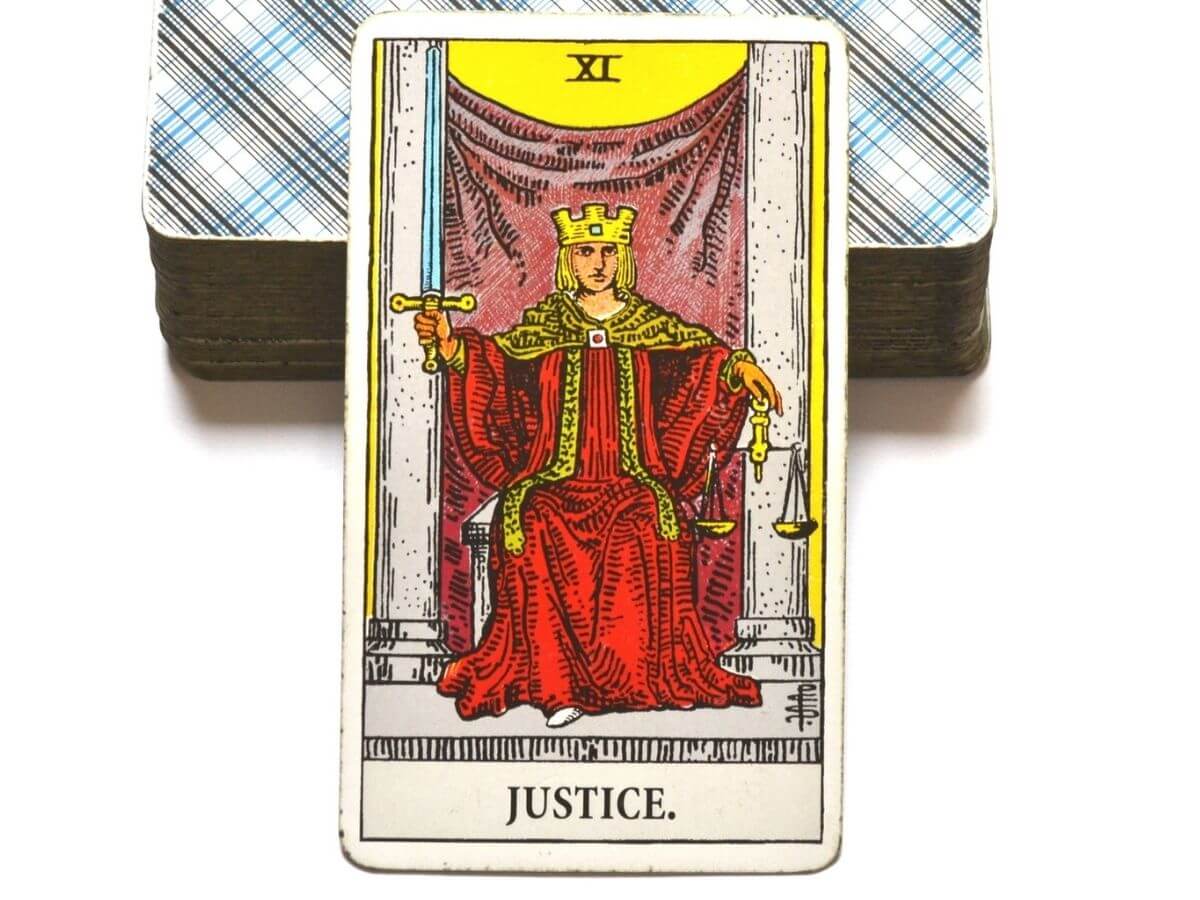