The symbolism found on this trump card is primarily drawn from Christianity, alchemy and Golden Dawn occultism.

The Rider Waite version of Judgement is based on the Le Jugement card from the Marseille Tarot deck.

Waite sticks to traditional iconography explaining, “The great angel is here encompassed by clouds, but he blows his bannered trumpet, and the cross as usual is displayed on the banner. The dead are rising from their tombs – a woman on the right, a man on the left, and between them their child, whose back is turned.”

However, Waite has made a few adjustments, for example by, adding more than three figures. He says he thought it “worth while to make this variation as illustrating the insufficiency of current explanations.”

Waite readily admits that this card reflects the literal image of biblical judgement, when the dead come back to life. But he is also quick to point out, that he considers there is more meaning in his interpretation of the card. He advises those “who have inward eyes” to look closer.

Who is The Angel in The Judgement Tarot Card?

The angel is most likely Archangel Gabriel, God’s messenger. Gabriel was the angel who visited various prophets, including Muhammad and the Virgin Mary in the Annunciation.

While the Bible mentions a trumpet blast preceding the resurrection of the dead, it does not specify Gabriel as the trumpeter. In more recent times, Gabriel has become identified as the trumpeter, largely due to his appearance with the instrument in popular works such as Milton’s Paradise Lost (1667).

Archangel Gabriel has been assigned to the element water, which is why his robe is blue. Water is receptive to energy; it helps people to be receptive to whatever divine message Gabriel delivers.

The wings of the angel are violet pink in color. The tone of this color is associated with Jupiter, the planet of expansion. It implies that the people below the wings are ascending to a higher level of awareness. It is the same color as the angel in Temperance, connecting the two cards. Waite writes that Judgement is a card of “eternal life, and for this reason it may be compared with that which passes under the name of Temperance.”

What is The Symbolism of The Trumpet in Judgement?

The angel blows his message through the trumpet. It is the message that causes us to remember that we are spiritual beings having a physical experience.

This awareness happens as we move from the third to the fourth and fifth dimension, where we can then access information from the Akashic Records or Cosmic Memory.

In a Tarot reading, this card signals that you are entering a higher vibration or dimension.

The seven rays radiating from the trumpet represent the seven trumpets sounded in the Book of Revelation which cue the apocalypse.

It may also be a reference to The Lords Prayer, which has seven petitions. This is a type of geometric prayer meditation which aligns in tone perfectly with the seven chakras. Some claim that the act of reciting this prayer, can unblock your seven chakras.

Our Father (The Lords Prayer)

1. Our Father who is in Heaven hallowed is your name

3. Your will be done on earth as it is in heaven

4. Give us this day our daily bread

5. And forgive us our offenses as we forgive those that have offended us

6. Lead us not into temptation

7. Deliver us from evil

The banner which hangs from the trumpet is the flag of St George. The red cross on a white background is associated with the crusades and Saint George. He is the military saint and is often depicted as a crusader.

The implication here is that we may achieve victory over death, even while still alive and in our earthly body.

What do The Family and Other People Symbolize in Judgement?

A group of people, a man, woman and child represent the resurrection. They emerge from their coffins, arms spread, and looking up at the angel in awe. These are the “sleeping dead” from the Book of Revelation.

The three figures represent The Holy Trinity, and you will note that the symbolism of three is reflected consistently throughout the Rider Waite deck.

In the background of the card, another family of three are awakening. The opposite pair of trinities here symbolizes that awakening can happen in both the physical and spiritual sides of life.

The people are naked because they have thrown off their worldly garments in favor of spirituality. They have died and undergone a rebirth, and now realize that the physical and spiritual world are not separate. They are ready now to start a new life, to which they are being summoned by the trumpet.

The child is symbolic of rebirth and transformed personality – a condition expressed often by people who have undergone a mystical experience, such as a near death experience (NDE), or communication with God through direct or personal experience. The child’s hair is the same color as the father, half black to show that he is the product of the father and occult practices. Black is associated with occult and occult training, enabling a person access to higher planes of spiritual knowledge.

The man symbolizes the conscious and Father. His hair is half-black to show he is the Magician, who has transformed himself and the woman by occult practice.

The woman is the sub-conscious and Mother.

The figures are depicted in a position, known as the LVX ritual, used in ceremonial magic in the Golden Dawn.

The woman with her arms outstretched forms the letter L with her body. This position is known as The sign of the Mourning of Isis.

The child lifts both arms to reproduce the letter V, The sign of Apophis and Typhon connected to renewal and rebirth.

The man folds him arms across his chest forming the sign X, The sign of Osiris Risen.

Combined the letters spell the Latin noun LVX, which translates as Light.

What is The Meaning of The Coffins?

At a basic level, the coffins symbolize death.

The inner section of the coffins is black, which suggests that the only way to burst out of ignorance, while in the land of the living, is by occult practices. Occult practices here include anything from mediation, magic, astrology, alchemy, tarot reading or astral projection.

The coffins float on a sea which is the final reservoir of those waters which begin in the robe of the High Priestess. This is the sea of the universal mind, the ultimate source of all ideas and creativity.

What is The Meaning of The Snowy Mountains in Judgement?

The snow-covered mountains echo a similar theme to The Hermit. White snow represents a blank page, fresh start and the time before the Big Bang and creation.

The blue sky indicates that the action in Judgement relates to cosmic subconsciousness.

There are three trees in the background. In this instance, it may well refer to the mind, body, spirit connection associated with the New Age, Shamanism and the Holy Trinity.

The Ultimate Guide to Judgement Symbols 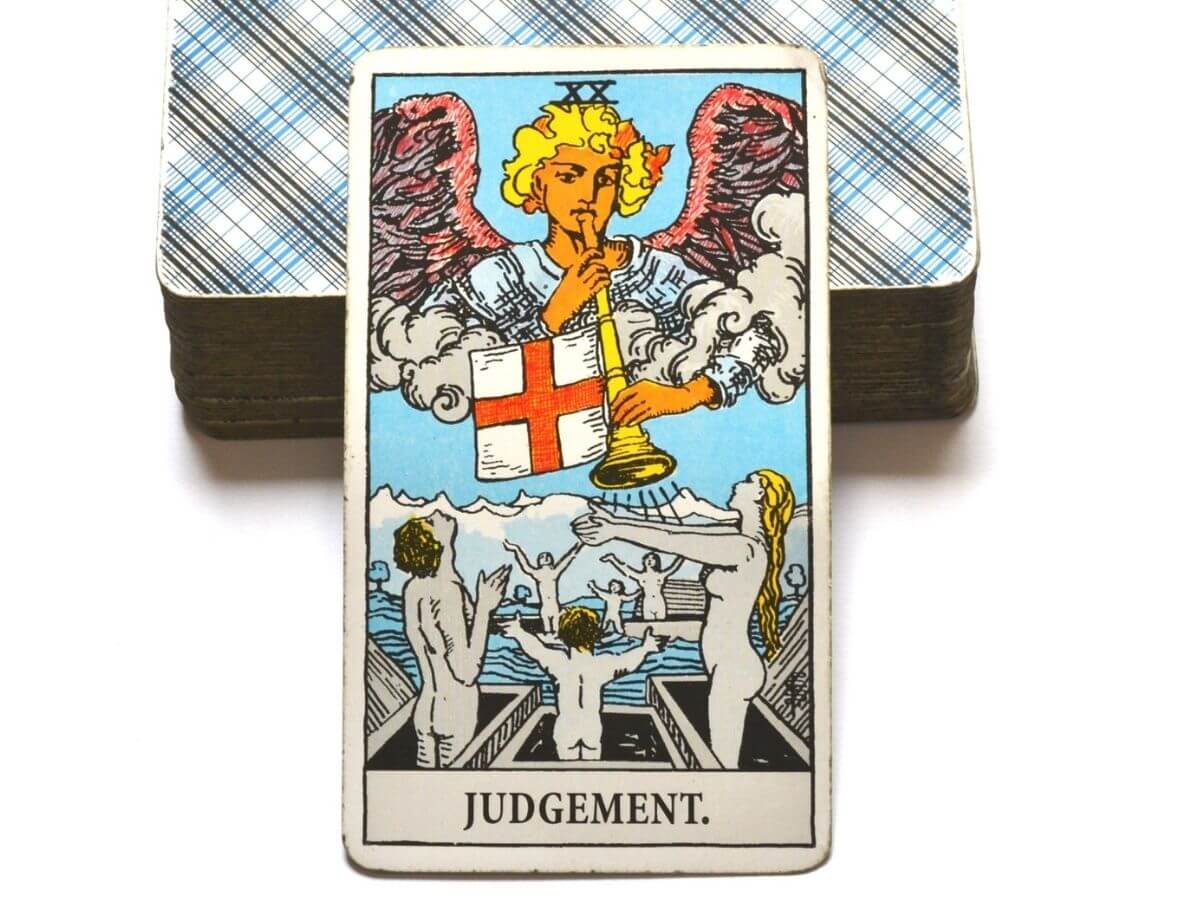