The symbolism found on this trumph card is primarily drawn from Christianity, astrology, western occultism and philosophy.

Compare The Hierophant to Historical Decks

The Hierophant is derived from the Pope card in older Tarot decks.

In most iconographic depictions, the Hierophant is seated between two pillars, right-hand raised in blessing or benediction. He also typically wears a three-tiered crown.

In occult circles, the rebranding the Pope as the Hierophant was an attempt to dechristianise the card meaning. The more modern name “Hierophant” was created by Antoine Court de Gébelin (1725-84), a former Protestant pastor who was instrumental in converting Tarot from a game of cards, into an esoteric method of divination. According to Gébelin, a hierophant was the title of the chief priest in the Eleusinian mysteries, a secret religious sect in Ancient Greece.

Despite the rebranding, the Rider Waite version still retains much of the symbolism of Christianity.

How is The Hierophant Different to The High Priestess?

The Hierophant represents more orthodox teaching, considered suitable for the masses. He is more likely to use traditional terms like God, Angels, faith healing and miracles. Whereas, the High Priestess prefers to teach in secret and to initiates, and is more likely to talk about astral projection, seances, moon magic (selenomancy) and sorcery.

What Is The Symbolism of The Hierophant’s Triple Crown?

The Hierophant wears the traditional triple crown of the Pope, known as the papal tiara or triregnum. Three is a reference to the holy trinity, and we see the symbolism of this number reflected throughout the card. There are 3 figures and 3 crosses on the Hierophant’s white yoke (the tie-like garment hanging down the front of his robe).

Three is also a reference to mind, body and spirit; and the three states of consciousness – the super-conscious, conscious and sub-conscious.

The crown is topped with a black letter ‘W’. This letter may refer to Waite himself, as an authoritative author of many esoteric subjects including freemasonry, divination, esotericism, alchemy, Kabbalism and ceremonial magic.

More likely, it refers to the Hebrew letter Vau. It is believed that the ancient pronunciation of the letter was more like a “W” and less like the “V” that it currently has in the Modern Hebrew language.

The Hierophant wears a blue neck-tie or scarf around his throat. This part of the neck is associated with the throat charka, and speaking truth. When we avoid saying what we feel, for example, this can trigger an energetic block in the throat chakra causing a sore throat.

What Is The Hierophant Holding in His Hand?

The Hierophant holds a yellow scepter in his left hand. Waite describes this item as a “triple cross”. Traditionally in iconography, whatever one holds in the left hand, represents what the person has dominion over.

The scepter has three bars, another repetition of the symbolism of the number three. This indicates, in a Tarot reading that the sitter is mastering the fusion of mind, body and spirit; or is embracing God and the Holy Trinity.

The Hierophant gives the ecclesiastical sign of benediction, or blessing.  This is always offered with the right hand. Three fingers pointing towards heaven to symbolize the divine trinity.

What is The Meaning of The Two Keys at The Foot of The Hierophant?

Two crossed keys lie at the feet of the Hierophant. These are familiar signs of the papacy, and represent the keys to the kingdom of heaven.

In a Tarot reading, crossed keys mean that the sitter has access to knowledge which people would like to hear about.

The keys are placed on a square dais, or platform. Notice there are four encircled crosses on the dais. These encircled crosses are globus cruciger, a symbol for planet Earth. They resemble the sign of Venus, folded in on itself. Venus is the astrological sign associated with this card.

The encircled cross pays homage to the mythological and cosmological systems which portray the four corners of the world, which correspond to two solstices and two equinoxes.

Who Are The Monks in The Hierophant Card and What do They Represent?

Two monks kneel before the Hierophant, listening attentively to his words of wisdom. Their heads are shaved in the practice of tonsure, a common medieval act of religious devotion in the Middle Ages.

The monks are symbolic of having an attentive audience. In a Tarot reading, they are a sign that the world is ready to hear what you have to say.

The robe of the monk to our left as the viewer, is decorated with the red rose. In Christianity, the rose was associated with the Virgin Mary, and eventually the creation of the rosary prayer.

The robe of the monk to our right, is decorated with a while lily. The lily appears to be Lilium candidum, also known as the Madonna lily, or white lily.

Note: The rose appears by itself in many cards of the Rider Waite deck, but the lily never appears alone. Where you find a lily, you will find a red rose in the Rider Waite.

What do The Pillars Represent in The Hierophant Card?

The Hierophant sits between two pillars. Some scholars claim these are two pillars of the Tree of Life from the Kabbalah, one representing Mercy and the other Severity. Others say they are a symbol of duality. In theology, duality is a belief in good and evil, or God and the Devil.

The Ultimate Guide to the Hierophant Symbols 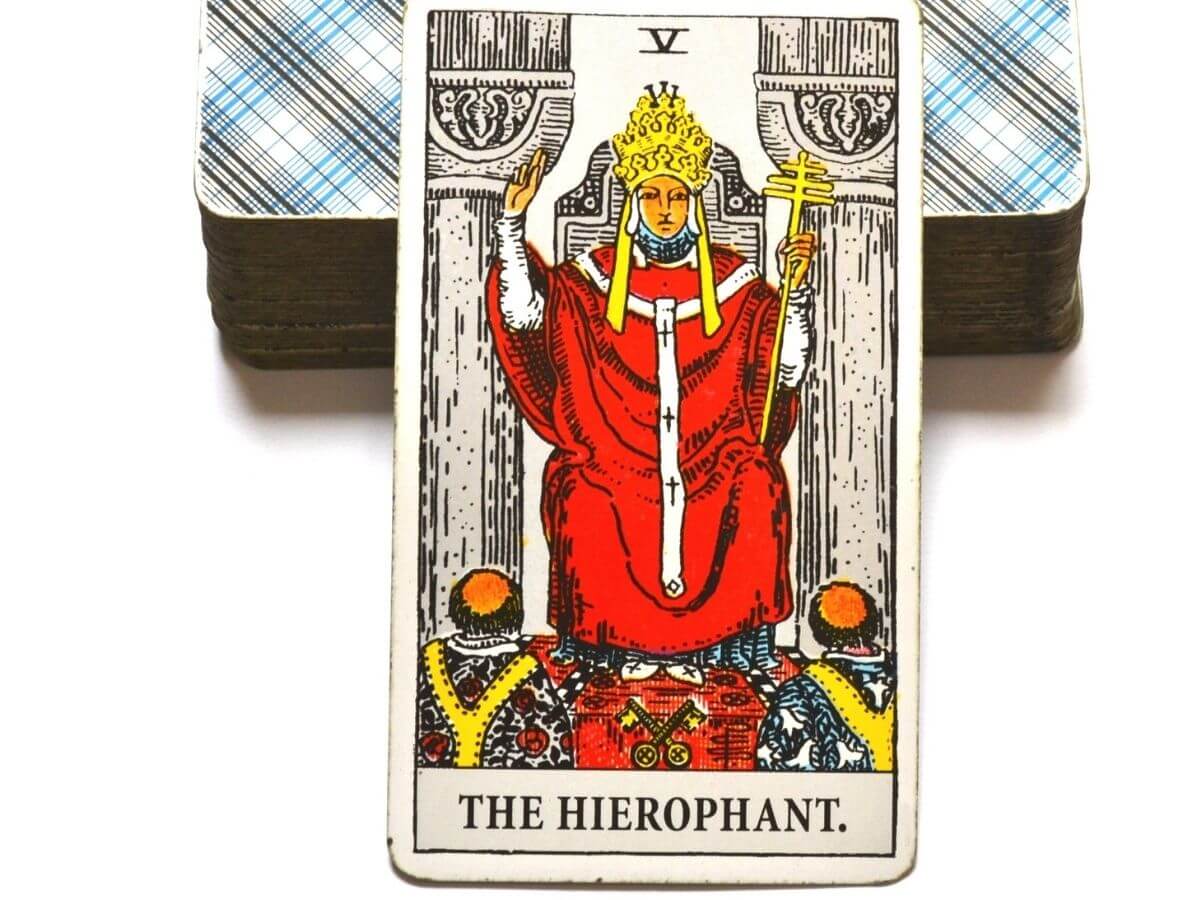