The symbolism found on this card is primarily drawn from mythology, religion, metaphysics and western occultism.

“The effigy of a knight in the attitude of prayer, at full length upon his tomb.”

Imagery of the 4 of Swords: Discover the symbol meanings, metaphors and allegory

Why is The Knight Lying on a Tomb in The Four of Swords?

A knight lies on a tomb in a stone chapel. A single sword is carved into the tomb and a further three swords hang on the wall above him. Light filters through a stain-glassed window.

The artist Pamela Colman-Smith created a funerary sculpture here, similar to medieval tomb effigies found in many churches and cathedrals in England and France. A tomb effigy is a life-size sculpture of a deceased person in a state of ‘eternal repose’, typically lying with hands folded in prayer, awaiting resurrection.

In Tarot, a tomb never represents physical death. Instead it indicates that the time has come to lie down and rest. It is a symbol of time-out.

The knight in this card is not dead, but rather he is in a deep state of restorative rest and meditation. The artist probably chose to place him on a tomb, to symbolize the deepness of this rest. This is not an indulgent rest, it is an active act of self-help. Swords in Tarot are associated with the active element Air, and this card reminds us that an active life requires periods of deep relaxation, in order to regroup and prepare for the future.

The tomb here, is symbolic of rest and sanctuary for a tired soul, following the pain of the preceding card, the 3 of Swords.

Note the knight has removed most of his armor, implying he feels safe to let his guard down.

Traditionally, a church was considered a place of neutral ground for worship, sanctuary and asylum. Honor dictated that the battle could not be taken beyond the church doors because it was sacred ground. This knight has chosen to rest in a church, because he is seeking complete escape from daily life. It is like placing a ‘do not disturb sign’ on your bedroom door.

There is a sense of mysticism here, perhaps the knight is in pursuit of communion with the divine, or trying to raise his conscious awareness. Perhaps he is seeking a personal psychic experience, such a premonition or dream telepathy (telepathically communicating with another person through dreams). Or maybe he is hoping for a faith healing.

This card evokes a sense of Nirvana, the yogi’s pursuit of the ultimate state of soteriological release (salvation) and liberation from duḥkha (unhappiness, suffering and pain) and saṃsāra (endless karma and reincarnation).

The knight could well be lying in yogic savasana, or corpse pose. The aim of corpse pose is to relax with attention, to remain conscious and alert while still being at ease. This pose is much harder than it looks because people find it difficult to relax and end up staring at the ceiling, or falling asleep.

So Much Stone in This Card, is There a Secret Meaning?

This card feels very cold, due to the presence of so much stone – stone tomb and walls.

I feel the artist wants us to associate petrification with this card, the magical ability of Medusa, to turn people into stone by looking at them in the eye. Perhaps this is why the knight keeps his eyes closed?

In Cornish folklore, petrifaction stories are used to explain the origin of prehistoric megalithic monuments such as monoliths and stone circles such as Stonehenge. Colman-Smith was particularly interested in folklore and she may have been exposed to these stories when she visited artist friends in Cornwall. She eventually moved to Cornwall in 1911.

Why is There a Stained Glass Window And Who Are The Figures in it?

A beautiful stained glass window allows light into the chapel which illuminates the scene. The light can be seen as the Divine Light of illumination and conscious awakening. This is the state of awareness one seeks by practicing trance meditation or astral traveling.

Throughout its one thousand year history, the term ‘stained glass’ has been applied almost exclusively to the windows of churches and other significant religious buildings. We are told then, by the presence of the window in this Tarot card, that this is the house of God. This is the temple of spirit, and to enter is to be in the presence of mystery. To engage in practices like prayer, a form of meditation, is to immerse yourself in this mystery.

At an even deeper level, a stained glass window in Tarot represents the window to the soul. We are reminded that the human body is also a temple, because it houses your immortal soul. For the body to become a sacred temple, it must be educated and dedicated to a spiritual practice in order to fulfill it’s sacred purpose here on Earth. When this happens, you begin to feel the presence of God, even when you leave the temple.

The Figures in The Stained Glass Window

Jesus is depicted in the window laying a healing hand on a kneeling follower. A halo looms around his head, with the word PAX.

PAX later became a greeting of Christian love. Pax is an abbreviation of the Latin salutations ‘pax vobis‘ (peace to you) or ‘pax vobiscum‘ (peace with you), which are used in the Catholic Mass.

What is The Meaning of The Three Hanging Swords?

Three swords hang on the wall above our knight like trophies. These swords represent past triumphs, battles already fought and won.

The remaining sword, placed on the side of the tomb, represents the next battle to come. It could possibly be the Ace of Swords, a new opportunity. This sword hangs within easy reach of the knight, and when he is ready, he will take it to the next battle or challenge, predicted in the following card, the Five of Swords.

Some authors point to the placement of the three hanging swords. One is positioned over the knight’s third eye chakra (psychic insights and intuition), another over his throat chakra (communication) and the final over his solar plexus chakra (decision making).

It may be that that knight is experiencing a chakra cleansing and rebalancing in these specific energy centers. Clogged chakras can cause tiredness and low motivation.

What Sphere Does The Four of Swords Represent in Qabalah?

Qabalah or Kabbalah is a system of Jewish mysticism which attempts to explain the nature of the Universe. Kabbalah originated long before it was associated with Tarot, but it has since been tied by Western occultism to the cards.

According to Kabbalah, God made manifestations. Each manifestation is called a Sephirah (plural, Sephirot). Fours in Tarot connect to the fourth Sephirah, called Chesed. Chesed translates as ‘mercy’, but could also be ‘love’.

According to the Hermetic Order of the Golden Dawn, El is the God associated with Chesed and Tzadkiel (Righteousness of God) is the archangel who resides over the sphere. The order of angels that reside in the sphere are the Chasmalim.

The Ultimate Guide to Four of Swords Symbols 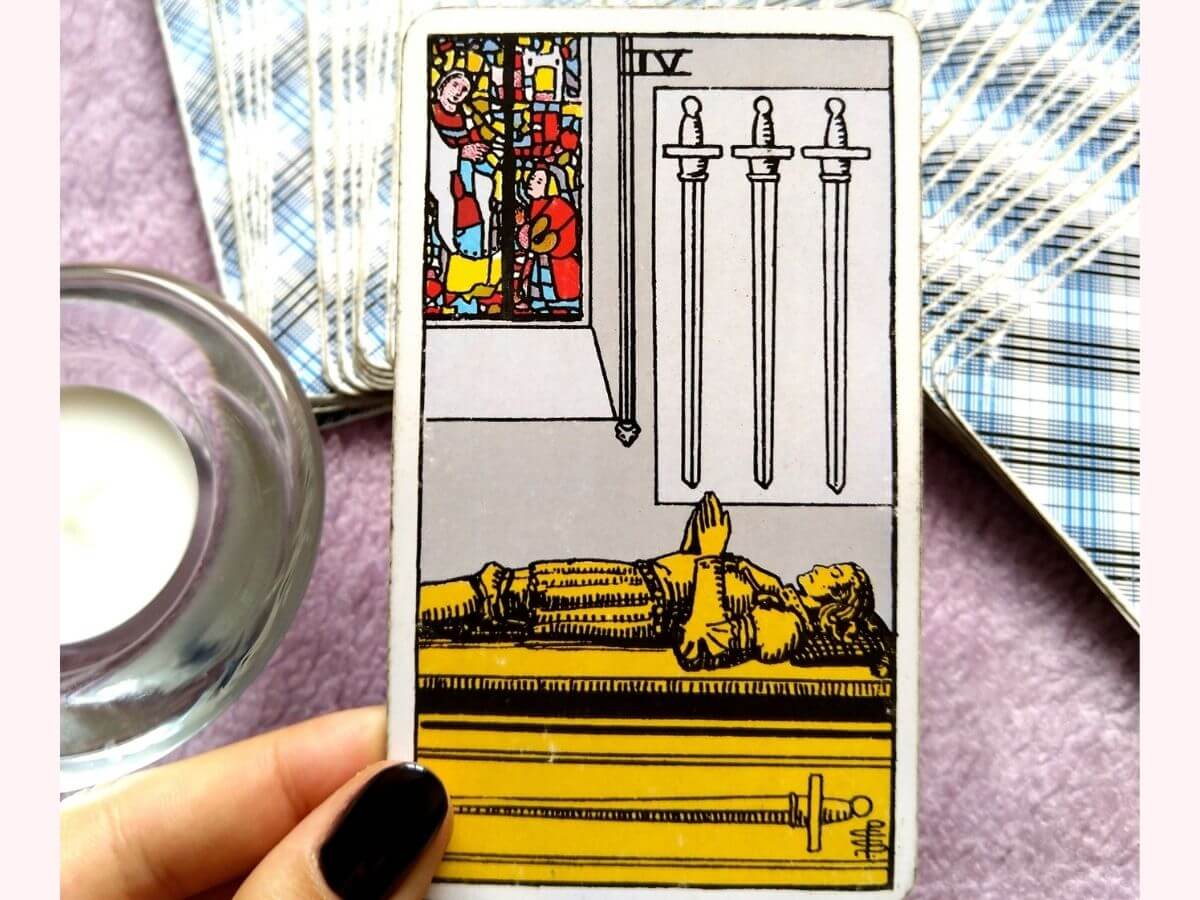