The symbolism found on this card is primarily drawn from mythology, religious text and astrology.

Why is a Hand Reaching Out of a Cloud with a Cup?

This hand emerging from the cloud is usually considered the Hand of God. This is the same hand from the Ace of Cups, and it is reappearing in this Tarot card to remind you of the Ace’s key message:

God has given you an opportunity, but you must play your part to turn it into something real.

A young man sits by a tree in this card, his posture a little defensive. He seems to be dreaming of being elsewhere and his body language indicates he is closed to what is on offer. When the Hand of God appears in a Tarot card, always look for the opportunity under your nose, you may be missing it.

What is The Meaning of The Tree in the Four of Cups?

Trees appear in quite a few cards in the Rider Waite deck, but usually in the background. When a symbol is in the background, it means the guidance refers to the distant future. The closer the symbol, the more immediate the message.

In the Four of Cups, the tree is a dominant feature in this card, and consequently, it’s symbolism is more important.

Since ancient times, trees have been associated with wisdom, knowledge and spiritual nourishment. The Tree of Life is a common symbol recognized by many religions. This could be the Bodhi Tree in Buddhism, the Tree of Knowledge in the Garden of Eden from which Adam and Eve nibbled on the forbidden fruit, the Holy Sycamore of ancient Egypt or the Kabbalah of esoteric Judaism.

Trees have many branches, symbolizing the many pathways and choices of life. The man in this card could be meditating on his future and which path to take next. However, the pathway seems to have presented itself (proffered by the Hand of God), but he is simply unmotivated to act.

What Does the Mountain in the Background Symbolize?

Mountains are awe-inspiring, they have a way of raising our eyes to Heaven and their presence lifts our consciousness above the ordinary, even when they are far away in the distance.

Mountains act as a reminder not to get too bogged down in the day-to-day grind, but to spend time creating a vision for your future, because your vision will help motivate you on challenging days.

In Tarot, mountains tend to heighten the drama in a card, think of the dominant mountain ranges in dramatic cards such as Judgement, The Tower and 10 of Swords.

In the Four of Cups, however, the mountain range is far away, and only peeps out from the edge of the card. This signifies that ‘raising your consciousness’ is not a pressing concern at this time, it is something to be aware of, but your attention is probably best focused on acting on events in front of you.

⭐Mountains appear in at least 25 cards in the Rider Waite deck. Here are a few more examples: The Moon, Temperance, The Hermit and The Lovers

Is The Blue Sky Significant in the Four of Cups?

The sky is clear blue in the 4 of Cups Tarot card, there is not a single cloud on the horizon. This is a wide expansive sky, which inspires feelings of freedom. The world is your oyster, this card says. Recognize how lucky you are, to have so many choices and opportunities. Of course, with choice comes the need to make decisions. It is true that some people feel overwhelmed by too many choices, and end up procrastinating and hoarding their energy.

Perhaps the blue sky is a reminder to be more aware of complaining about our ‘first world problems’; and realize how lucky we really are.

What Sphere Does The Four of Cups Represent in Qabalah?

In Qabalah (Kabbalah), the 4 of Cups depicts Chesed, the fourth sphere of mercy. By working with this energy, we can dissolve the self-imposed blocks that cut us off from experiencing motivation, joy and love. The key to understanding Chesed is that we all deserve to feel these things, regardless of our past failures, sins or sorrows.

The Ultimate Guide to Four of Cups Symbols 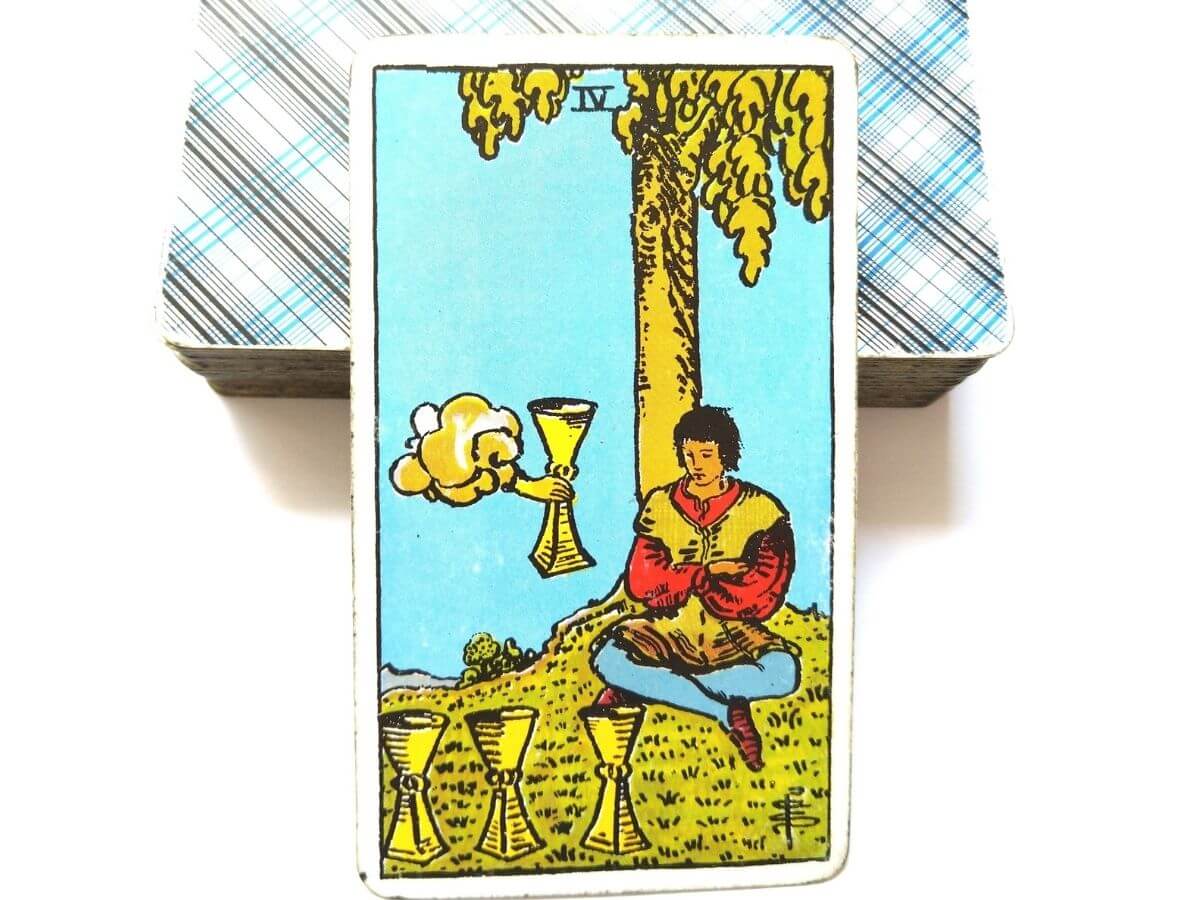